Well, the old 8 inch Celestron scope has been traded in and I'm still waiting to pick up my new 127 mm Explore Scientific scope.  In the meantime, I switched from optical observing to radio observing and assembled my radio "eggbeater" antenna that promises to ease the pain of trying to point my Yagi antenna at a satellite and track its path while twiddling my receiver knobs for the best reception.  This alternate antenna design is more
omnidirectional and cross and circular polarized and should be an effective LEO satellite receiver without having to point it at all.  The eggbeater is made of two circular copper conductors and the ground plane is made of the 8 aluminum spokes. Two of my associates in my small satellite group, Robert and Jann, have already used a similar type of antenna to receive telemetry from several amateur Cubesats and also have downloaded weather pictures from NOAA satellites that send fax pictures to ships at sea and other receivers.  Pretty neat.

The photo below shows my eggbeater being inspected by Astronomer Helper, Danny, who was very interested in the connector on the antenna.  What is he trying to say? 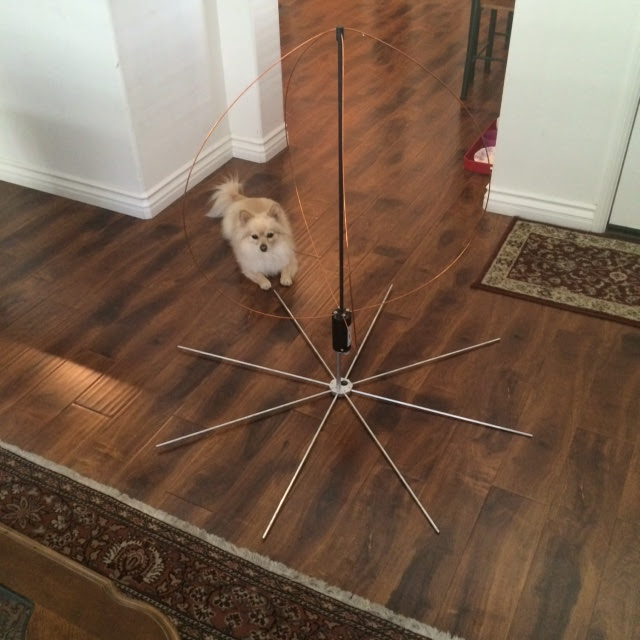 Oh, yes, I get it.  The antenna connector requires the ubiquitous PL-259 and my Kenwood ham receiver has a SMA antenna connector.  Oh well, I will have to do a grand loop and stop at Ham Radio Outlet for some adapter cables and connectors when I go up to see Mike at OC Telescope, and pick up my new scope.

Ok, now how about some interesting astrophysics?  No, it's really interesting and fun and includes a video.  The referenced news article below is an interesting discussion of gravitational lensing and has an embedded video which is one of the best animations and descriptions I have seen about gravitational lensing.  Astronomers use a foreground galaxy, which bends light rays from a galaxy in the background, to get a magnified view of the background galaxy.  The background galaxy is too dim to see otherwise.  How neat is that.  All because of Einstein's finding that light can be bent by large gravitational masses.
In addition, and perhaps the most exciting part of this story is since the light paths around the foreground Galaxy represent different lengths, and hence different look back times, the astronomers are actually able to see the background galaxy as it is and was at different times.  That is definitely cool stuff.  Normally, we only have one universe to examine but here we get a chance to see the same object at vastly different times and can get a better look at how the nature of the universe and how it I s changing.   Enjoy.


If you are interested in things astronomical or in astrophysics and cosmology
Check out this blog at www.palmiaobservatory.com
Posted by Palmia Observatory at 10:36:00 AM