Well, as you know we are off site and not at the observatory, but instead are in Nurenberg, which was the final destination of our Danube river cruise, which started in Budapest.  Wow, it has been a fantastic journey with fun on the river, great history, great people, and great food, but we are ready to be home again.

We didn't do any astro observing, not because we didn't look up, but mostly because we had high clouds at night.  We were able to see Jupiter and Venus, but not a lot of other stars.  Surprisingly, there seemed to be opportunities of dark skies, but the clouds
didn't help us.

So, since this is an astro image blog, let's consider a couple of items of interest to amateur astronomers.  First, I tried my various software apps on my IPad and IPhone to see if they worked ok.  Yes, the map app, the weather app, the scope nights app, the go skywatch app, and the go satellite watch app, all seemed to work fine and keep track of where we were and what time on the clock to use for planning observing times.  That was good news.  I did have one problem with my IPad email for a bout a week in that I could receive email just fine, but could not send at all.  It resolved itself when we finally landed on dry land.  The Internet service on the ship was kind of spotty.  We were forewarned because all shipboard wifi was provided by satellite and the river cruising required passage through locks, under bridges, etc and not always readily available and certainly not often very high speed.

I do have two astro type photos to share.  The first image shows an ordinary looking vehicle, but there is a strange conversion factor on the side.  It says 280 ft / km, which to me at first, just using the standard units abbreviations, represented 280 feet per kilometer.  How could this be?  Maybe if the vehicle were traveling fast enough, then the distance measured, as seen on the moving frame, could indeed have been length contracted such that 1 km could would appear to be contracted to 280 feet. 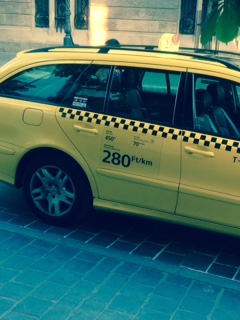 Well, you can probably guess the correct answer for the sign means something else.  The something else is that in Budapest the national currency is the Forint, valued at about 300 to the U.S. Dollar, is abbreviated ft, so the taxi rate is really what the sign refers to.

The second image shows an ancient stellar angle measuring device we saw at the Middle Ages castle in Nurenberg. 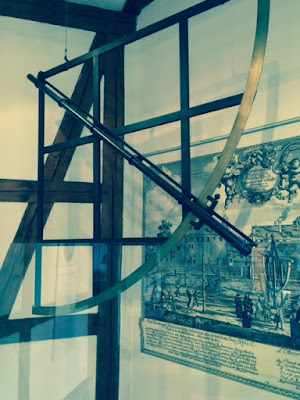 When you consider the size of the angle indices, you can see they could measure angular distances pretty decently.

P.S.  Yes, they did serve a good martini on the long ship and the included wine, champagne and desert with every meal was fantastic.

If you are interested in things astronomical or in astrophysics and cosmology
Check out this blog at www.palmiaobservatory.com
Posted by Palmia Observatory at 11:36:00 AM