Well this was the week for the night of observing through the 60 inch telescope at Mt. Wilson, but it was not to be.  The bad news is that after making the reservation 9 months, as we waited for the go forward email from the observatory, the email came in that the observatory was clouded out and our session was cancelled.  Darn.  Well, the good news was that we still had time to pack up the car and
head to the OCA Black Star canyon star party, even though the weather forecast on Scopenights was for heavy clouds and possible rain from about 11:00 PM onwards.  So, we might get a little observing in nonetheless.

Before reviewing the events there, I should mention some upcoming events on the calendar.  Remember that the OCA General meeting is this Friday, Oct. 9.  See you all there for a presentation by ProfessorLeonard, SDSU, on Watching stars die:  The hunt for supernova progenitors.  This month also has a lot of meetings going on if you like driving to Pasadena.  There are lectures and events at Beckman Auditorium and open houses at the  Planetary Society, Carnegie Institute, and JPL.  It should be fun, but we can't fit it into our schedule and besides I don't like the long drive just for one lecture.  Even for multi day conferences, I usually give in and stay overnight in Pasadena.  Getting soft in my old age I guess.

Next week resident astronomer Peggy and I are going to Fort Irwin for a tour of the NASA Goldstone tracking facility.  Remember that this ground station is one of three where the radio signals from space missions at Mars, Pluto and belonged are received back on Earth.  That should be a good tour too.

And, just for you long term planners, remember to keep in mind August 21, 2017, when you can see the total solar eclipse.  Palmia observatory staff will be in Casper, Wyoming for the event.  We made our hotel reservation months ago and apparently hotels are pretty much full, so don't delay. The good news is that the total eclipse will cover a thin track across the U.S. and other locations are possible.

Anyway, back to the star party.  Even though we were disappointed we set up our scope, even as the clouds seemed to be coming in earlier than forecast.  It was fun meeting new and old friends, including amateurs Karen and Ed, Joyce, David, and Marcello.  Steve used his laser pointer to point out some of the usual astro objects, but the clouds kept coming.  Resident astronomer Peggy used her binoculars and after taking a quick look at Saturn, I tried to get some images of deep sky spiral galaxies, M74 and M101.  Well the camera image didn't show much of anything. Those spirals are quite dim, magnitude 10 and 8.3, respectively.  What with the sky background light and clouds, I couldn't really get much of anything.  Finally, Marcello said he had a good view of M13, which with magnitude 5.8 was quite visible.  So as clouds came rolling in, I slewed the scope to M13, but it was already swallowed up in the clouds.  I took one last desperate image anyway, with 60 second exposure.  At the time, I could just barely see that I might have got an image, but only later with the help of Photoshop did I see much of anything.  The image is pasted below. 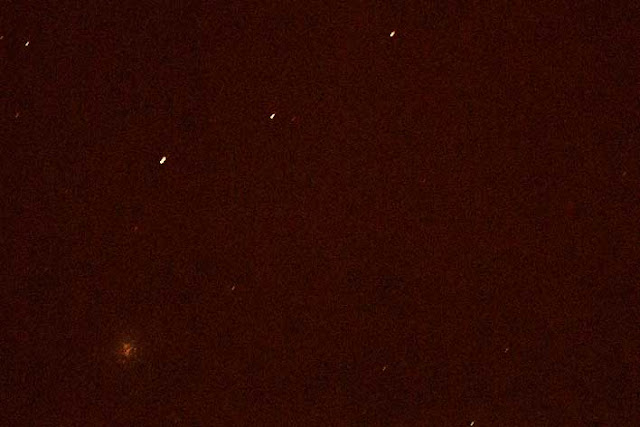 It seems you can see through the clouds, at least a little bit.  Also, you can see some star trails in my 60 second exposure, so some telescope tracking error is still present.

So, we all shut down and packed up and were on the road by 9:00 PM, with the last of the hopeful observers leaving shortly thereafter.  So, weather clouded us out twice in one day.  How lucky is that.

One piece of luck, was getting an email back from amateur Civil Civil EngineerMarcello, who maintains a very professional Instagram site with great photos.  My trials and tribulations and images and hard luck blog show the pain of learning all of this astronomy stuff pale in comparison, but Marcello has some very good photos.  Check it out at https://instagram.com/m76r/:   Great work Marcello!

There are over 200 postings of similar topics on this blog
www.palmiaobservatory.com
Posted by Palmia Observatory at 12:30:00 PM