As we move into Thanksgiving holiday mode of structuring our time, it's been hard to schedule more time for observing.  Resident Astronomer Peggy has been busy with decorations and holiday partying preparations.  As the other resident astronomer, I have been busy completing two online courses and just finished the final exam for the Exoplanets  course and getting ready for the final exam for the climate science course and the ongoing study of Lie Algebra with
Math guru Dave is still taking a lot of time to gain even a little understanding.

My observing plan was to include some daytime solar prominence observing, but what with 80 degree temperatures, who wants to be outside at noon looking through the scope's eyepiece while covered up in a photographers shroud.  Oh well, I guess that is why we like living in California and choose to postpone solar observing for another month.

In the meantime, how about a couple of images from astrophysics?  At the last OCA General meeting, post doc Jennifer van Saders of Carnegie Observatories made a presentation of how the Kepler satellite, as well as other observatories, have been "listening" to the stars, which is covered under the physics branch of Asteroseismology.

Now as a retiree with almost 20 years working for big oil, I remember how geoseismology, with seismophones placed on the Earth's surface can reveal what goes on beneath, but how is this type of approach to be done with stars?

Well, it turns out that just by observing how the light from stars fluctuates with time that the internal oscillations and acoustic vibrations of the stars can be monitored and the star internal structure can begin to be revealed.

I'm just starting to read through how all of this stuff works.  My loyal associates at Amazon, "we aim to provide books for all physicist wannabes", shipped me a copy of Asteroseismology by Aerts, Dalsgaard and Kurtz, from which the two charts below are copied.

Now we know fusion of hydrogen and other light elements into heavier elements is the energy source located at the central most dense and hottest part of stars.  The energy from these reactions is transferred to the stars surface by a series of processes including radiation, conduction and convection.  These energy flows resemble energy transmission by sound waves in the Earth. 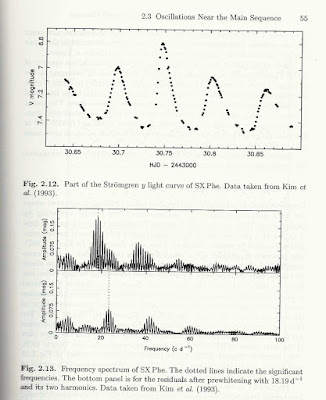 These changes, in tenths of a magnitude change, can be observed and followed by amateurs as well, but the professionals perform further analysis on millions of stars.  The Fourier analysis of the magnitude of the time series of the star's lightcurve shows the major frequency components of the variation and the time period of internal oscillations in the star.  These oscillations caused for example by convective flows of energy from the center to the stars surface resemble the same acoustic signals detected by earthbound seismophones.  The convective cells show up in images of the sun and often delimitate where sunspots occur.  The boiling up of energy is modified by the stars age and history.

The second image shows some of the more general findings of Asteroseismology. 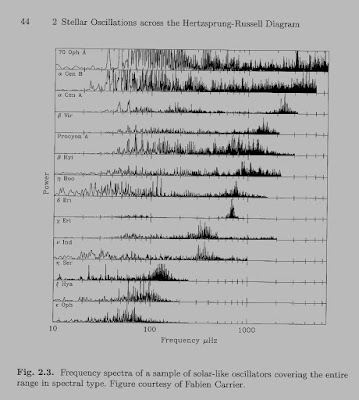 The graphs show how the location of stars on the main sequence on the HR is clearly a function of the internal structure of stars.  The frequency of variation is measured in micro Hertz, so the acoustic waves occur over periods of hours to days.

Pretty neat stuff already and I'm only up to page 50 so much more to come.

Anyway, that's it for now.  Have a happy Thanksgiving.