Well the journey in the wake of the Vikings continues and the search for brighter Northern Lights goes on also.  As luck would have it there were gale force winds predicted for our first scheduled stop in Greenland, and many nearby icebergs, so we have to move further down the coast to Qaqortoq, Greenland and spend the night at anchor there.

The photo below shows one of the small icebergs that passed close to the ship.  Note the rugged country and narrow ship passage and the neat blue color of the ice!  The area in and around Prince Christian Sound and all of the turning and twisting fjords is very rugged and majestic and very beautiful.

Also one very large iceberg was seen in the distance and this one resembled some sort of battleship looking structure.  It almost looks like a giant plastic cutout to resemble a ship, but this is indeed what we saw and Resident Astronomer Peggy snapped this shot.  This one example is just one of many icebergs that we saw that were shaped by the wind.

The scenery is simply fantastic as we wind through the narrow channels and passages.  Again, I am so surprised that anyone can make a living in this remote and cold part of the world.  Having just attended the recent Mars Society meeting, I was struck by the analogy between a cruise ship sailing between ports of this largely uninhabited part of the world.  The cruise ship can operate independent of supplies from shore for several days whereas a Martian trip will require independent operation for a couple of years.  The indigenous people who live here in the north are able to make living off the land.  Travelers to Mars will have to learn how to live off the Martian land as well.

Our initial port stop in Nanortalic was cancelled due to unsafe sea conditions and we had to sail on to Qaqortoq.

Now since we had to bypass our first stop in Greenland and move on to the next stop, we had extra time to just enjoy shipboard life until the morning when we could take the tender ashore.  So, it was time to do a little more homework on "Astrophysics: The Violent Universe."  Sorry about that, but this is an astronomical blog you know!

Lesson 8 was on special relativity review as the course gets ready to delve deeper into black holes.  Now many of you physicist wannabes will be familiar with some of the basic tenets of special relativity such as time dilation and length contraction, but there are many other effects that if you as an observer were actually moving at high speed you would also be able to observe.  I especially liked this lesson because even though I understand the basics when it comes to working a real practical problem I easily get confused and can't find my way out.  The screenshot for the online course identifies three observable effects including: Aberration, Doppler Shift and Intensity enhancement.

I am not going to be able to describe what the video shows but will paste the URL reference to the site.  The simulation software and demonstration turned on and off various combinations of these relativistic effects so that we could observe what our eyeballs would see.  I'm not sure if you can just jump to this particular section or not, but you can work your way there if you are interested. 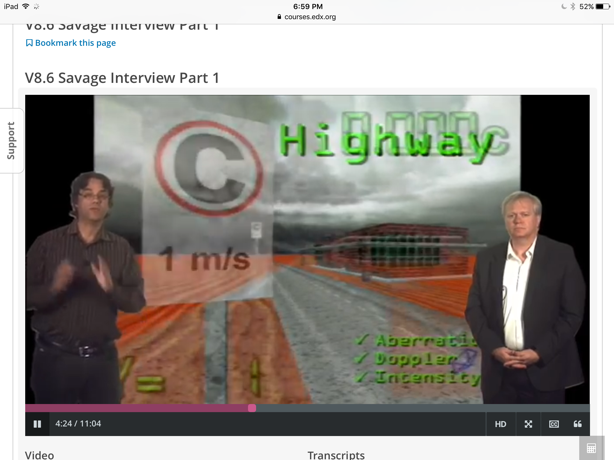 One of the neat simulation effects was that of intensity modification of moving sources and is illustrated in the screenshot below.  Imagine that you are approaching a light source, such as a star, and consider what your view of the object would look like as your speed increased towards the light speed limit.  Well, surprisingly, special relativity predicts that the observed intensity of the star would increase and most of the light being emitted from the star would appear to be directed back toward you along the line of motion.  I still don't quite understand this, but that is what the math says and to watch the simulation display the effect was very interesting.  Again the neat thing about this particular lecture was the simulations performed there that showed how the light would be bent and distorted, just due to special relativity effects, so that the observed star appears brighter.


The course offers free software that you can download and run your own scenarios.  Pretty neat, so when I get back to the observatory, I'll download it and take a look. 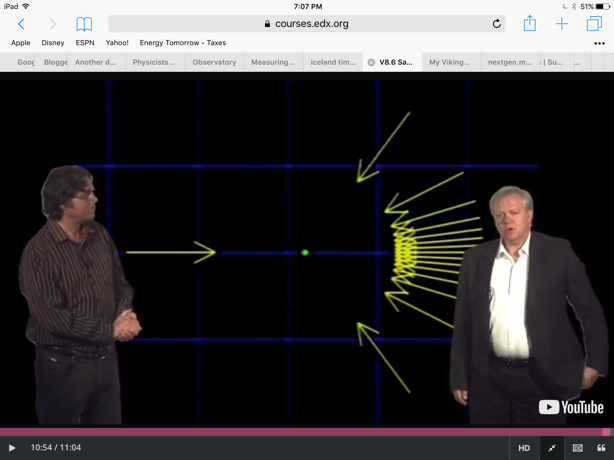 Well, that was fun getting some of the homework out of the way.  Later that night as we sat at anchor, I got a phone call from fellow passenger, Billy, who said the lights were out.  So, I grabbed my camera and put on heavy coat and gloves and headed up top.  The 15-second exposure below shows some of the green glow with the lights of Qaqortoq in the distance.  Hey, who photobombed my shot of the Northern Lights?  Oh, I see its just me!  I found I needed to block out some of those pesky shipboard lights and the only available light shade was me.  We kept waiting to see if we would eventually see more extreme forms of lights that show up as glowing curtains of green and red lights, but it was not to be.  Maybe some other time?


Finally, after giving up on seeing brighter lights, we were able in the morning to go ashore to this little town of Qaqortoq and wander about and consider how hard the lives of people who live here year round.  It was comforting to see that our ship was still there in the harbor.

Ok, its back on the ship for another sea day as we continue on the path of the Vikings until our next stop in Newfoundland.


P.S. If you are wondering how to pronounce "Qaqortoq", my best recollection was something like "quahrtauck."