Well this week we have been packing our bags to travel to southern Illinois where Resident Astronomer Peggy's brother, Don, passed away a couple of months ago while we were on our Iceland cruise.  More about that shortly, but first let's check out the latest astronomy news.
We missed OCA Astrophysics meeting and the 100th anniversary of the 100 inch telescope at Mt. Wilson, which was the topic of a 2-day conference held at the Huntington Library.  It would have been great to attend that, but we can't be everywhere.  Maybe some folks that went to that will fill us in on some of the historical discussion.

More evidence piles up that what looked like flow water on the Martian surface is really just flowing sand.  The recent November 20 announcement from USGS shows the latest analysis was forwarded to us from Gravity Guy, Ken.  Thanks for that, Ken!  For more details, check out the original article at: https://www.usgs.gov/news/previous-evidence-water-mars-now-identified-grainflows 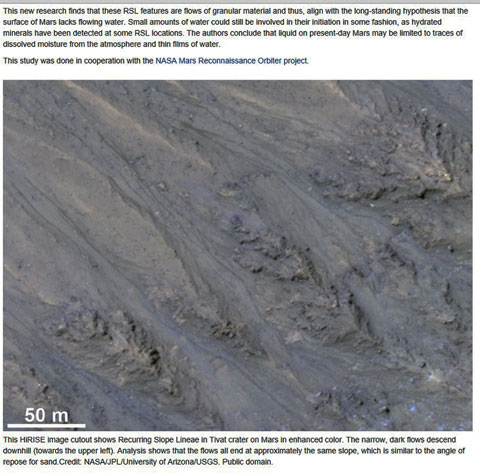 Just before we flew to southern Illinois, I attended the UCI Astrophysics colloquium where Professor Andrew Frisst, Caltech, described some of his work in exploring the "Galaxies in the Early Universe" and how the early growth phase of galaxies can be determined by multi wavelength measurements.  He explained how Spitzer images in two filter passbands can show a great deal about early galaxy growth by measuring how the metallicity, which to astrophysicists means elements heavier than hydrogen, and in this case, oxygen and nitrogen, changes as the galaxy evolves.  He also talked about his upcoming use of the ALMA observatory radio telescopes to get additional information about galaxy changes and how his proposals for an  11 hour observing session and a 2nd one for 69 hours were just approved.  His study of young galaxies range from red shift 2 to red shift 6.  I really enjoyed the presentation even though by the time I figured out the axes on his various data charts, he was on to the next subtopic.

Speaking of multi-wavelength observations, check out this neat collection of images of Centaurus A.  Our view of stellar objects depends on the wavelength used.  It is by examining the images in all of these different wavelengths that the history and evolution of the galaxy can be identified.


I was quite intrigued by the ALMA observatory, which is a huge collection of radio telescopes located high in the Chilean Andes.  Their website mentions that public tours are available on Saturdays and when I checked I found that they were all booked solid for the next couple of months.  Wow, if you want to take a tour of that observatory you need to plan far in advance and then just getting to Chile and arriving close to the observatory the day before can require quite a bit of logistical planning.  Umm, maybe some time we can get there?  Hey, maybe during the same time as the upcoming total solar eclipse in 2019?  I know some folks are planning to go so maybe we can get both events done on the one trip?

Anyway, if travelling to Chile is not in your plans yet, you might want to just check out this great radio astronomy series of videos that just went on sale.  This is a great sales price and The Great Courses series is almost always very interesting and informative.


Ok, we finally flew to southern Illinois via St. Louis, where we always enjoy dinner at one of our favorite barbecue, steak and seafood places there.  I guess I don't have to mention again, but, yes they serve great martinis!

So, we finally drive to Don and Joyce's home in southern Illinois.  We always enjoyed getting to that part of the country and visiting with them.  Most of their neighbors live off the land, either growing plants and food or raising animals on the land and all of their driveways were full of various machines, ATVs, tractors, mowers, etc.  Each time I'm there, I notice how different my life has been, spent in offices, factories and laboratories, and not really involved with the land on which the rest of our civilization depends.

Don passed away a couple of months ago and we were not able to be there at that time because we were out of the country.  Don had a wonderful life and lived to be 85 years old.  We will miss you;  Rest in peace, Don!

While we were in southern Illinois, I planned to take at least a few minutes and enjoy the dark skies and see if I could get a few more images of the Milky Way.  So check out the picture of our rental ATV (Astronomer Transport Vehicle) and the mini-tripod which allows good steady pointing of the DSLR for long exposures.  I would have been better served if I had brought my bigger camera tripod but because of the weather forecast and not wanting to carry the larger tripod on the airplane, I decided to just go with the mini-tripod.


The weather forecast was for mostly cloudy skies so I didn't plan to take a scope or big camera tripod or any of our normal cold weather layers, hat and gloves.  I did remember, after almost being eaten alive by the various mosquitoes and other critters that live in the grass, to check out a website that I just happened to find which shows the "Mosquito Forecast."


I should have known better, but I thought based on the forecast and the cold weather, that I didn't have to worry about mosquitoes.  Wow, was I ever wrong!  The weather cooperated only one night during our stay there and kept the clouds away, but, boy, was it cold and still the mosquitoes found me quite tasty.  It was so cold, even at just after sunset, the temperature was listed as 32 degrees, that I could only stand to be outside about 30 minutes.  I just barely managed to take a couple of images of the night sky and Milky Way.  Eighty second exposures are a bit too long and star trails are visible with the non-tracking tripod, but the sky was still pretty dark just after sunset and the images were not washed out due to city lights.  If I could have stood the cold,  I would have gone out about an hour later, but alas, not this time, and it was time to pack up and head back to southern California.


P.S.  Clear skies and may you see great globular clusters of turkey, potatoes, dressing, cranberry, and pumpkin pie on you dinner plates.  Have a happy and wonderful Thanksgiving!