Well, I just got back from the Dark Matter 2018 conference at UCLA and can offer a few comments on that topic.  But first, ever since we flew to Florida to see the launch of the Falcon Heavy, the idea of seeing another launch has been a top priority.  It turns out that a launch was scheduled
from Vandenberg Air Force Base on Wednesday morning at 6:17, so I thought that if I got to UCLA that morning early enough to skip a lot of the heavy traffic, I could watch for the rocket contrails from there too.


So, the traffic up to UCLA was the usual, and it took me a little more than 2 hours to get there, so I had to pull of the freeway in Redondo Beach, or somewhere, at 6:10.  Well, just as I inched my way off the stop and go freeway, the radio announced that the launch had been scrubbed and to come back tomorrow.

Ok, so the next morning, after already attending the conference for one day, I diligently made my way to the 17th floor Hotel Angeleno bar to my chosen look out post.  Initially, I thought I could see the launch from my hotel room, but the azimuth was off by about 20 degrees and even if I hung way out on the balcony, it just was not going to work.

So, I did a little outreach chitchat with the early morning bar staff, who were there to sere just 3 early rising customers, and showed them the launch status on my Ipad while all the time looking for something in the sky.  The clouds were quite heavy and there was a bit of a hill in the background, but finally, I didn't see any rockets red glare, but the contrails were there!  At least there was something visible.  So, now, letting my confirmation bias show through, who says you can't do physics at the hotel bar!

It turns out that OCA Science Nerd and Theatre Impresario, Scott, had the same desire to watch for the rocket launch from Anaheim Hills.  It looks like the clouds didn't get in the way there, like they did for me in Los Angeles.  Scott shared this 9 video frame composite image of fire and flame.  That is really neat, thanks for that, Scott!


Alright, back to the Dark Matter conference, where just under 200 scientists gathered to hear the latest details regarding the search for the elusive material.  I enjoyed hearing from scientists that I recognized from UCI including James Bullock, Tim Tait, Kevork Abazajian, Marcel Pawlowski,  and Anna Nierenberg.  I also recognized Ed Wright, UCLA,  Elana Aprile, Columbia U., Simeon Bird, UCR, Mike Boylan-Kolchin,  U of Texas, Austin, Katherine Freese, U of Michigan, an Dan Hooper Fermilab.  Of course, there were many other excellent speakers and in the cases where the topic was way over my head, the conference leaders stuck to the time schedule right down to the minute, so that 30 minute talks/questions were completed and done in 30 minutes.


Now there was just too much material discussed there for me to do any kind of technical review of the findings.  But the kick off presentation by James Bullock on structure formation and simulations and identification of the small satellite galaxy problem was so instructive in getting at the dark matter issues.  You can follow this topic yourself by reviewing the arXiV paper by Bullock and Boylan-Kolchin, that lays out the problems and outstanding issues of the cold dark matter paradigm at: https://arxiv.org/pdf/1707.04256.pdf


So, I an not going to describe any of the "direct" searches for dark matter, that is searches in laboratories now that try to find evidence of dark matter particles bumping into each other or being created in particle accelerators.  All of that work is very interesting, and each year the researchers keep chopping away at regions of energy that the dark matter particle could be hiding.  The only evidence for dark matter now is the astrophysical observations that seem to require something like dark matter to explain the structure of the universe as seen though gravitational lensing and the CMB spectrum.  In the screenshot below, you can get a sense of how various direct searches keep excluding energies where the dark matter is not found.  The search sensitivity and regions excluded keeps growing an yet finding the elusive dark matter is left to the next experiment.  Several studies hoped to be able to present results from their ongoing observations once their data goes unblinded.  Elena Aprile, of the XENON Dark Matter Program went so far as to say that once their data is unblended they see at 50% chance of significant observation.  It is not clear to me how these statistics are derived.


One thing that becomes apparent very quickly is that there are probably hundreds of ideas of what dark matter particles are made of.  Some theories propose very heavy particles, including up to very heavy primordial black holes.  Other theories propose very light particles, such as axions.  So, it seems there is no consensus on the size of the dark particle.  Each theory is self consistent and accounts for the astrophysical observational evidence that started the whole search for dark matter in the first place.  The slide screenshot below shows the range of particle masses, expected to make op the possible dark matter zoo and you can see that the mass scale covers over 30 orders of magnitude.


For me, I tend to like  the primordial black hole conjecture, or the axion conjecture and now even the dark matter radio conjecture.  All of these concepts can be consistent with know observations of the structure of the universe, and even offer some improvement in the discrepancies that show up in dwarf galaxy structure.

Now, some of the other searches for dark matter that look more like astronomical searches include the search for and source of excess gamma rays and cosmic rays.  Some gamma rays and cosmic rays are projected to come from dark particle annihilations and tracing their path across the sky is an ongoing study conducted in space and on the ground.  On the ground surveys rely on air showers, say about 10 km high, and the resulting Cherenkov radiation is detected with large optical telescopes.  See the screenshot below which shows the typical received pattern and how three telescopes are used to point to the location on the sky where the ray came from.


There are several arrays of Cherenkov telescopes already in operation and a larger array of telescopes is being planed.  The Cherenkov radiation from the shower is collected by large aperture mirrors and unfortunately the radiation is so weak that the observing schedule can only be done at night, especially moonless nights.  The Veritas observatory in Arizona is shown below

Another type of observatory, which can work 24 hours all day long, are of the type like the HAWC Observatory, which is located in Puebla, Mexico.  High energy particles that emerge from the air showers enter the covered tanks of water and phototubes detect the light generated at that time.  By looking at the pattern of lights showing up in the multiple tanks, the direction of the particle causing the air shower can be determined. 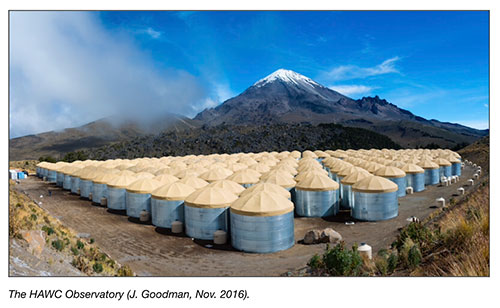 Ok, that is about enough on dark matter, in fact I had sooo much fun at the conference that I played hooky on the last afternoon and got an early start on the drive back to the observatory.  It was a very good conference, but as usually what happens, so much of it is over my head, but I keep learning the lingo and keep studying.  It was also nice to reconnect with another physicist wannabe, Larry.  Good to see you again, Larry!

So, one final note for this post is an announcement that we received from Doug at Curiosity Peak Observatory in Julian.  The Julian Dark Sky Network is sponsoring a discussion of women in science and another chance to see the great move, "Hidden Figures."  So, even if you have already seen the movie, this looks like as good excuse as any to goto Julian.  We can't fit it in to our schedule, but check out the details in the flyer posted below.  Thanks for the heads up, Doug!


Finally, while we are on the topic of women in science, it saddens me to comment on one of the leading cosmologists in the popular press, Lawrence Krauss, and the allegations against him of sexual harassment.  He has been disinvited to several upcoming events and meetings that I had been planning to attend. The final evidence is still under review, but the number of complaints have been building for years. Both the APS and AAS have very strong stands against any type of harassment of students and attendees at any of their conferences or work environment.  It is sad to read all the complaints filed by women against the person that I always looked forward to hearing speak, but now, what can you, Lawrence, speak for yourself and your own behavior?