Well, this week I'm at Society for Astronomical Sciences 37th annual symposium on Telescope Science in Ontario, CA.  This is a great event with presentations mostly by amateur astronomers, and professional with small telescopes, who are doing some really neat science type research projects.  This post focuses on just one broad topic, that of light curve analysis, and how astronomers are trying to determine and model the physical processes which generate these light curves.


During the first workshop session, Dr. John Bally described how the use of narrow band filters can be used to go deeper and get clearer views of the underlying physical processes surrounding variable stars and nebulas.  He talked about the history of Eta Carinae, all of which I was not aware.  I didn't know that the Eta Carinae nebula was likely caused and observed back in the 1840's.  The nebula is the result of the two progenitor stars, Eta Carinae A and Eta Carinae B, each very bright, a million times brighter than the Sun, and each something like 100 times as massive as the Sun. 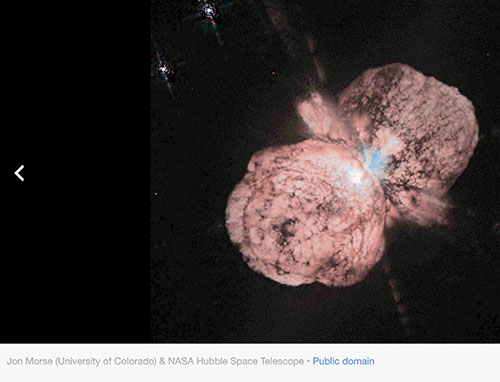 The other main line of evidence that ties the nebula to the events of the 1840's is that when one compares the speed of gas and dust leaving the two stars and back calculating based on the size of the bubbles, that it is all consistent with originating in the 1840's.  For all of us observers in California, well, we just have to wait until we can travel to the southern hemisphere to see Eta Carinae which is located at -59 degrees declination.

What can be going on with these stars?  Many stars are variables and their luminosity varies over cycle periods from hours to days to years.  With multiple stars orbiting a common center of gravity there are many more possibilities of gas being dragged from one star and accreting onto another.  These interactions give rise to local heating and hot spots and changes to the observed light curve.  There is also a lot of interaction between a star and its accretion disk as shown in the following example from Dr. John's presentation.

By the time gas and dust has lost enough energy to fall very close to the star it is mostly going to be ionized and rotating which will interact with the star's magnetic field to cause a lot of increasing magnetic effects and heating.  Studying the light curves from these systems provides a way into looking at these various processes.

John also alerted us to a great biography, written by Bo Reipurth, of astronomer George Herbig, who had a long career studying early stellar evolution.  He has a class of stellar objects, called Herbig-Haro objects, of which there are now over 400 objects of this type, which exhibit bright jets and emission nebulas.  We first mentioned these objects in the May 26, 2017 blog post.

Following the first day of workshops and tutorials was a session called "Evening with the Pros" where two professional astronomers talked about their ongoing projects.  First up was Lance Benner, JPL, who spoke on Recent Radar Imaging of Near Earth Asteroids.  He described how Earth based radio telescopes and radar are able to detect and estimate the size of NEA that come very close to the Earth in their orbits.  The way in which radar ca get images of asteroids still is a bit confusing to me, even after hearing about radar imaging before, but the radar paints a picture based on range information and doppler shift. He uses antennas as Goldstone and Arecibo, which he was said is back online after three months or repair following Hurricane Maria.  Many NEA are only a few kilometers in size and some even have their own small satellite "moons".  Pretty neat stuff!

Then Dr. Jessie Christianson, NASA, spoke on how amateurs can help the just launched TESS mission to find and confirm exoplanets.  TESS is just now moving to its final orbital position and will start its first science run in just a couple of weeks.  She explained how TESS scans the skies for exoplanets and covers a much larger area than Kepler probe ever could and she predicts that 16,000 exoplanets will be found in TESS two year mission.  TESS cameras have wide field of view and will scan the whole southern hemisphere in its first year and then rotate and scan the northern hemisphere in its second year of operation and does all of this while monitoring 200,000 bright stars every two minutes.  Because of its wide field of view, each of TESS camera pixels cover wider area of sky than do most earthbound amateur telescopes and cameras.  Because of this, she says that amateurs are in a very good position to help support TESS by going back and looking at some locations where possible exoplanets are identified and then with their higher resolution helping to confirm or disconfirm the light curve as coming from an exoplanet.  She said that for every confirmed exoplanet there will be probably have been 10 other images that were initially thought to be an exoplanet but were really caused by eclipsing stars or some other natural event.  That is pretty neat too and shows how amateurs can really help!


Now on to the second day of the symposium the rest of the attendees showed up.  Bob Buccheim, SAS President and former OCA Secretary, welcomed everyone and thanked all of the vendors who displayed their wares and whose support keeps the cost of the symposium very low.  For the next two days we heard great presentations from 30 or so speakers, of which I have just barely said anything other than my emphasis on light curves.  There was though one speaker, Woody Sims, who spoke about his year long journey towards finally getting his LISA spectrometer connected to his telescope and finally getting accomplished enough to start gathering spectra.  This was really impactful for me because I am still struggling on my now 2 year journey to find the time and courage to set up my spectrometer and do the same thing.  Thanks for letting us know about that, Woody!


Sticking with the emphasis on light curves in this summary, take a look at the following typical light curve, in this case observed for star USNO 1030.  The light curve can be used to determine the orbital period and sizes of the stars and if the distance to the pair is known, we can get estimates of stellar mass and diameter.  Now we have seen many instances of light curves before, but in this presentation by Rakshak Adhikkari, undergraduate at Troy U, went further and considered 3-dimensional modelling of the two binary stars.


The 3-dimensional models that are derived as best fits to explain the light curve is shown below.  These models used other supplementary information from radial velocity measurements and spectral estimates of temperature.  The temperatures of the two stars used in the analysis was 4900 K and 5900 K.  The orbit period from Fourier analysis is 6.017 hours, which means these two stars are really moving around each other at very high velocity.  The mass ratio of the two stars was 0.78.  Note that hot spots were included in the model also as a way of reducing the residual error between the light curve predicted by the solid model and the observed light curve.  This is the first time I've seen this 3-D modelling technique and it looks pretty neat!

There were too many other interesting presentations that demonstrated the technical capability of many amateur astronomers, who have become experts, through many long hours of practice and learning, at gathering astronomical data in such areas as asteroid occultations and helping resolve NASA false positive exoplanet findings by further ground based observations..  Just hearing about all of those amateurs who have become practiced experts on taking spectra and light curves and learning how to remove many of the observing errors that can trap beginners and even experts for that matter. There were several other presentations about ongoing astronomy courses and hands on learning in many colleges and even high schools and how students really get excited about conducting their own little research projects and collecting data from their small telescopes.  But, I can't go on more about all of those astronomers and will close with this final comment about the SAS banquet main speaker, Griffith Observatory Artist and OCA member, Chris Butler.  Chris was at his best and presented a very funny and illuminating look at the strange breed of persons, like us, "the astronomers", who have taken us "From Nine Planets to Nine Billion Worlds."  Very thoughtful and funny; thanks for that Chris!

And for all of you blog readers that want to see real astronomical photographs, I have one image.  Now, I didn't bring a scope to the SAS symposium, but I did have my cell phone and managed to capture this conjunction of the Moon and Venus taken out of my hotel window in my PJs.  Oops, hope that is not too much information!


Finally, speaking of funny, let me leave you will one final slide from a presentation by Tim Robertson, ALPO, where he described a study of data collected from the August 2017 total solar eclipse.  Thanks for the informative study and thanks for reminding us of this cartoon about the early days of the three blind mice!