New cosmic ray course; Don Brun's measurement of light bending during the eclipse; Should the expansion of the universe make galaxies larger?

Well, we are back in the observatory after having a fantastic opportunity to do some imaging and viewing though the 60 inch Hale Telescope located at Mt. Wilson Observatory as described in our recent July 10 post.  First of all, given that this is Friday the 13th, we should ask if there are any superstitious astronomers or astrophysicist wannabe out there?  Nah; I didn't think so!
In this post we cover a new online course on cosmic rays, an introduction to Don Bruns measurements of starlight bending near the sun during the recent solar eclipse and a new observatory camera and some simple calculations of Hubble acceleration.

First up, a look at the calendar of upcoming meetings and conferences shows we have the OCA general meeting, Friday, July 13 and then all of next week, July 15-22, the international COSPAR conference, with about 2,500 attendees will be held in Pasadena, CA.  I just read somewhere that COSPAR means "the Committee on Space Research."  Hmm, I did not know that, but I will see you all there for some great presentations and discussions!


Next up, you might be interested in this just released course on Cosmic Rays, Dark Matter and the Mysteries of the Universe, prepared by Waseda University, and offered by edX.org.  I just signed up and went through the first week of 8-10 minute video sections.  Check out the screenshot from the course below.

If you want check out the details and enroll (nothing to this really, just log on) in this free course at: https://www.edx.org/course/cosmic-rays-dark-matter-mysteries-wasedax-astro112x

The course gives a high level review of the standard model of particle physics and spends some time on how the astrophysical processes that occur in supernova explosions might be considered the source of highly accelerated protons that are thought to be the source of cosmic rays.  It is mostly though, the muons,  that are produced in the air showers as these protons enter the upper atmosphere, that reach the ground.  The incident flux of muons on the ground is about 250 muons per square meter per second.

Have you been wondering how the attempt at measuring the bending of star light during the eclipse of August 2017 turned out?  We have published several posts on this blog where the new attempt was being planned and how we here also pretended to get ready for the measurement by photographing the background stars during the night, several months before the August eclipse.  We travelled to Casper, WY, for the eclipse and while there attended the ASTROCON 2017 conference, where we heard retired professor Don Bruns, talk about all of the preparation he had been doing in an attempt to duplicate the famous observation that showed that Einstein was indeed right.

We too tried to photograph background stars near the sun during the eclipse.  Well, we were hardly able to capture any stars at all during the eclipse, except maybe Regulus, because the solar corona was still so  and we certainly had not enough preparation and error reduction and analysis to show that we had any chance at all.  You can read all about those events by going to the blog main page and using the search box to search for "eclipse" or "Bruns".

Anyway, this August 2018 edition of Sky and Telescope magazine shows Don Bruns at his eclipse viewing location and the scope and mount that were provided by vendors interested in supporting the whole effort.

So, how did Don's attempt to verify the bending of starlight go?  Well, check out the data plot, again abstracted from the Sky and Telescope article.  The bending of star light by the gravitation of the sun, as predicted by Einstein theory of general relativity, is shown by the black curve.  Previous data from 1973, is shown as circles and Don's new data from 2017 is shown as squares.  So based on the assumption that Don's previous analysis and of taking care of all the possible sources of error, which could change the measured distances, it looks pretty clear that the data fits the prediction.  This measurement shows that the amateur equipment available today, when coupled with good analysis, can repeat and get good data of the famous Eddington measurement.  Today, professional astronomers do not repeat this experiment because there are better and more accurate methods to verify the bending of light in gravitational field.

Next up, is the new CMOS camera that we have received in hopes of doing more accurate color analysis and photometry of stars and maybe even a little bit more of astrophotography.  The camera is mono color, can do below ambient cooling, with a sensor resolution of 4656 x 3520 pixels.  The image below shows the camera (red) with a computer controllable filter wheel, all mounted on an 80mm refractor.  The filter wheel has room for eight different filters.   I still have yet to try out the camera and have not got around to it yet because the camera needs a PC to operate and new software and cables and all sort of learning curve issues.  I hope to say something about any progress in the coming weeks.

One of the new software tools which I hope to use with the camera is Maxim DL.  Now I have been reluctant to upgrade to Maxim software because of the steep learning curve.  Well I finally bit the bullet and upgraded to Maxim DL.  I had previously been using a version of AIP4WIN for my photometry and astrometry measurements, but have run into too much trouble trying and keeping AIP4WIN working will all of the recent Windows upgrades.

So, one of the first things I tried with this new software was to make sure that I can load a DSLR raw image files and do analysis.  Wow, ok, it seems to work ok!  Check out the screenshot below which shows a DSLR image of Jupiter and moons.  I still don't really know how to run the software, it has like a 700+ page user manual online, but you can see that it has a blue/green bullseye aperture which I placed over one of the moons.  The analysis box (sorry it might be a little fuzzy to read in this image) has all sorts of statistics based on that one data point, such as SNR, FWHM, and immediate magnitude calculation.  Wow, all of these features would have required several operations with the other software.  Now I just have to read the manual and hook up the new camera. 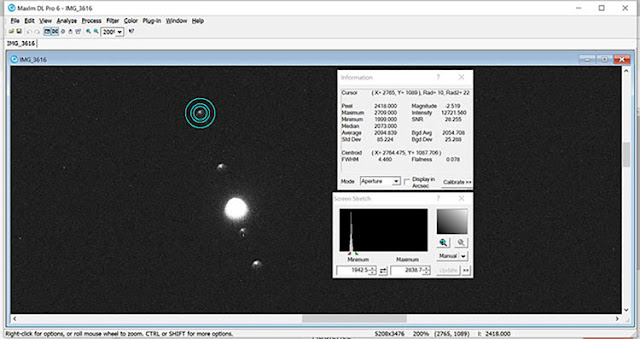 Finally, we should finish up with some questions and a simple calculation of Hubble expansion of the universe.  My interest in this topic is a key part of cosmology, but it was an article forwarded by Gravity Guy, Ken, written by Dr. Dan Hooper, Fermilab, on a far out idea of some advanced civilization, which was trying to move their star closer to their home planet to counteract the effects of wildly sped up acceleration of the universe.  I am using that paper as a guide as to the types of calculations necessary to answer these questions.  Thanks for generating me more homework, Ken!

To me the more simple question is, "Are galaxies getting bigger because of the Hubble expansion of the Universe"?  Most statements that I have seen regarding this question is that solar systems and galaxies, being gravitationally bound systems, are not affected by the normal rate of Hubble expansion seen to be present today.  But why aren't galaxies expanding too?  To begin to see why, I did a simple calculation, just using the current value of Hubble constant, which tells us how fast galaxies seem to be moving away from us and each other, the further the distance away the higher the velocity.

So, student and astrophysicist wannabe simple approximation of how much our own solar system would expand, assuming that gravity is not present, is calculated below.  Note that in a billion years the Earth's orbit would have increased by about 7%.  This is not much, but if the same expansion had taken place several billion years in the past, then the impact of the sun on Earth's climate would have been significant and could have left an impact on geologically observable events.  But we don't hear about this effect.  We only hear about how the sun's internal dynamics are changing, on its path to becoming a red giant, and its luminosity has been steadily increasing, while the distance remains about the same.


So why don't we see this effect of Hubble expansion in our solar system?  Again, my student and astrophysicist wannabe take on this is that gravitationally bound systems can over power the Hubble expansion and their size remains relatively the same and is not affected.  To get a sense as to why this might be the case, look at the calculations below, which compares the gravitational acceleration of the Earth in its orbit around the sun to the Hubble expanding universe acceleration.  My calculation is simplified in that it just uses the same value of the Hubble constant and approximates the correct answer and does not do the much more difficult calculation.

So, it seems that in the case of solar systems and galaxies, the gravitational acceleration is much higher than the Hubble acceleration, so the objects remain the same size and yet the universe is still expanding.  I could be completely off on this calculation, but it seems to be consistent to what we know and hear about the expanding universe.


And now let's end from a quote, which I first saw on the "Starts with a Bang!" website (check the blog first page for the web reference), in which Astro Katie (Katie Mack) is quoted:

"The Universe is expanding the way your mind is expanding.  It's not expanding into anything; you're just getting less dense."