Well we are back from Seattle and have a few loose ends to clear up regarding the 233rd AAS meeting plus on observation using a new star filter
First, I waited for about an hour in line on the AAS exhibit hall floor to get one of the spectroscopy survey disks used by the Sloan Digital Sky Survey (SDSS).  These large disks, probably more than about 1400 of them, were used to mount fiber optic cables that were placed in precisely drilled holes that would match up with between 640 and 1000 galaxies targeted per disk per night.  Each disk precisely matched the sky position for the scheduled observing night and the multiple fiber optic cables brought the light from many galaxies to the spectrometer for spectra measurement on many galaxies at the same time.  The disks are placed at the prime focus of the telescope.  This technique allowed the survey to measure spectra for millions of galaxies.  Once used, the disks are not needed anymore and now the SSDS folks are giving them away.  Each disk is about 31 inches in diameter and weigh in at about 11 pounds of aluminum.  After many of us waited in line at the SSDS booth, then we headed to the FedEx office on the ground floor of the convention center to ship the disks home.  Thanks for giving the disks to interested AAS members!


So, here is my disk, #2727, which my friends at FedEx just delivered today.  If you look closely at the disk you can see many of holes lit up in the sunlight (well its pretty cloudy and rainy, but it is light).  Maybe someone out there will count all the holes and let us know if the disk is one of the 640 target galaxies or the 1000 target galaxies type and find out how many extra holes are there and used for calibration and guiding?  Anyway, now I just need a telescope big enough to make use of the memento.


By the way, if you can't recall what the SDSS survey telescope in Apache Point, NM, looks like, then check out this photo below.  You can get more of the details of the survey and download survey data and do your own searches at: www.sdss.org.

Another loose end that was not covered in our previous blog posts was this slide from Joseph Silk's presentation on the future of cosmology.  It shows sort of the state of the art of surveys evaluating if primordial black holes (PBH) might be responsible for the effects of "dark matter."  As you can see there is still a small region of PBH of a certain mass size that has not be ruled out.  If the particle physicists had been successful in finding a dark matter particle, then we might not need to worry about this one small remaining gap, but those searches have turned up empty handed going on 30 years now.

Joseph Silk, has had such a long career studying cosmology that I always look forward to reading more about his work.  The book below on The Philosophy of Cosmology includes some of his and other editors' works on philosophy and the scientific method as applied to cosmology.  Cosmology is different from most sciences in that you can't repeat the experiment and the experiment always includes us as an end product of cosmological evolution.  If you like the philosophy of science you might like this text, especially given some of the newer theories, like the multiverse and many worlds interpretations, etc., where verification by observation has become much more difficult and often considered nearly impossible to verify or rule out some of these more exotic, yet still useful, theories. 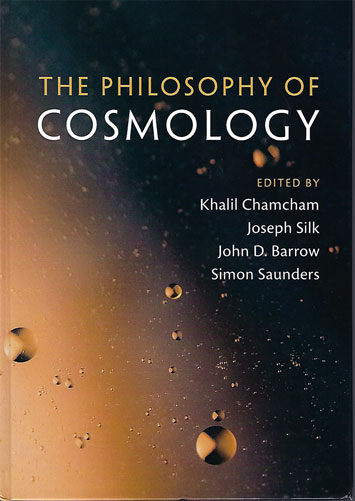 I didn't have time to read much of anything in the book, but just a cursory glance at the first chapter showed an interesting summary of the nature of the current cosmological model.  This chapter summary is titles: What can we Know?


After getting all tied up thinking about philosophy of the universe, it was time to head up to the OCA monthly meeting.  This time as we walked across Chapman University campus we had to detour because of some new building construction and by chance walked by the newly completed science building.  Wow that is quite an impressive building and it includes some fancy artwork embedded into a large covered ceiling panel.  In the image below you can see the lighted spiral that seems to rotate around, what else could we call it, a central black hole.  Pretty neat!


Anyway, it was good to see everyone at the monthly meeting where longtime OCA Wally Pacholka gave the main presentation.  Wally has been capturing the night sky as seen from many national parks in the US and even some in other countries.  His images have appeared in Astronomy Picture of the day (APOD) and other national magazines.  The photographs were very beautiful and if we had any wall space left in the observatory, we would have picked up some signed copies of his work.  If you are interested in such things, you can check out his website and purchase any art there at: www.AstroPic.com.  A screenshot of his webpage is shown below.  Thanks for a great and enjoyable presentation, Wally!

The artwork was beautiful and fun to see but the main thing that caught my attention was when he described the use of a star filter on the camera.  This star filter adds what looks like diffraction spikes to the bright stars in you night sky image.  You can sometimes see the same kind of diffraction spikes when using a reflector type telescope due to the mounting structure of the secondary mirror.


Hey that is pretty neat!  Even one of the dimmer stars, in the upper right of the image, has some diffraction spikes too.  So how does this star filter work?  Well, you can see how the filter has a bunch of lines etched in the filter in a square pattern.  Hmm, I'm going to have to get out my old optics book to review how these etched rulings cause all of this diffraction.

Ok, that is about it for now.  If you are still filling in observing dates on your calendar then you should consider the total lunar eclipse on January 20 and for those in southern California, if the clouds behave and if launch actually goes this time, you might be able to see the Delta IV Heavy contrails on January 19 at 11:05AM.  Maybe this attempt it will actually go and not be scrubbed!