The Emergent Multiverse; Get your Lagrangians down pat; Keeping up with daylight saving time; Jocelyn Bell Burnell on Discovery of Pulsars

Well we are busy packing our bags for our upcoming Alaska adventure, but we have some further comments on a foundation of quantum physics book and a neat article on white dwarf cooking and crystallization and on the 2019 UCI Reines Lecture.

One of the participants at the Philosophy of Dark Energy, David Wallace, a Philosopher of Physics, now at USC, has written a very interesting book on the Everett interpretation, “The Emergent Multiverse.”  He does a good job of working through all of the pro and con philosophical arguments for the various interpretations.  He argues that the Everttian interpretation is not just an interpretation, but is in fact just quantum mechanics and does not need any extra special interpretations of the measurement problem.  Hmm, I really don’t like the Everett approach, but I am trying to be open to the argument. If you like thinking about the foundations of quantum mechanics, this book, even though I am just getting started on it, is one of the best on the subject. 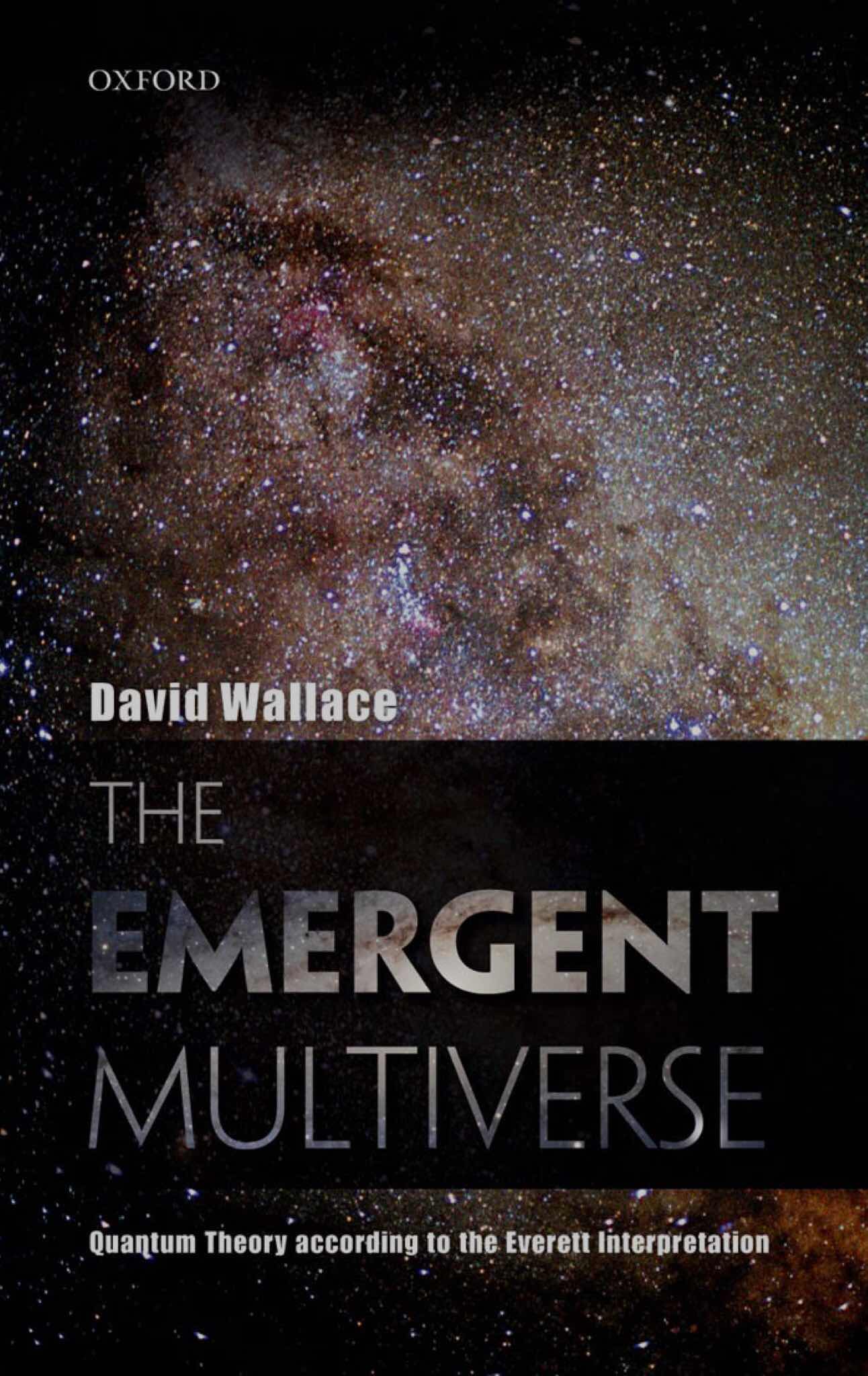 If you have been wondering what some of the approaches being considered to explain what dark energy is, you had better come up to speed on field theory and how to right the field equations and Lagrangians.  This is a topic that I continue to struggle with.  But you have to make your way through it.  In the following figure, from Wikipedia, you see the basic form of field Lagrangians that consist of various 4-dimension partial derivatives and terms involving a mass term, m, and fields squared and some to the fourth power.  To explain dark energy, some additional, often time varying fields are also included.  So, I continue to struggle to come up to speed.

Ok, so thinking about Lagrangians has pretty much tired me out and yet it is time to adjust the clocks for daylight savings time.  Most of us just turn the clock back, but if you are using your IPhone and are traveling between other time zones you need to make sure you change to “automatic update” or you will still be out of time.  Ok, I am now good to go, but consider, if you like steam punk type stuff,  the following steam punk type clock that our skeptic David Naiditch is trying to figure out and adjust for daylight saving time! 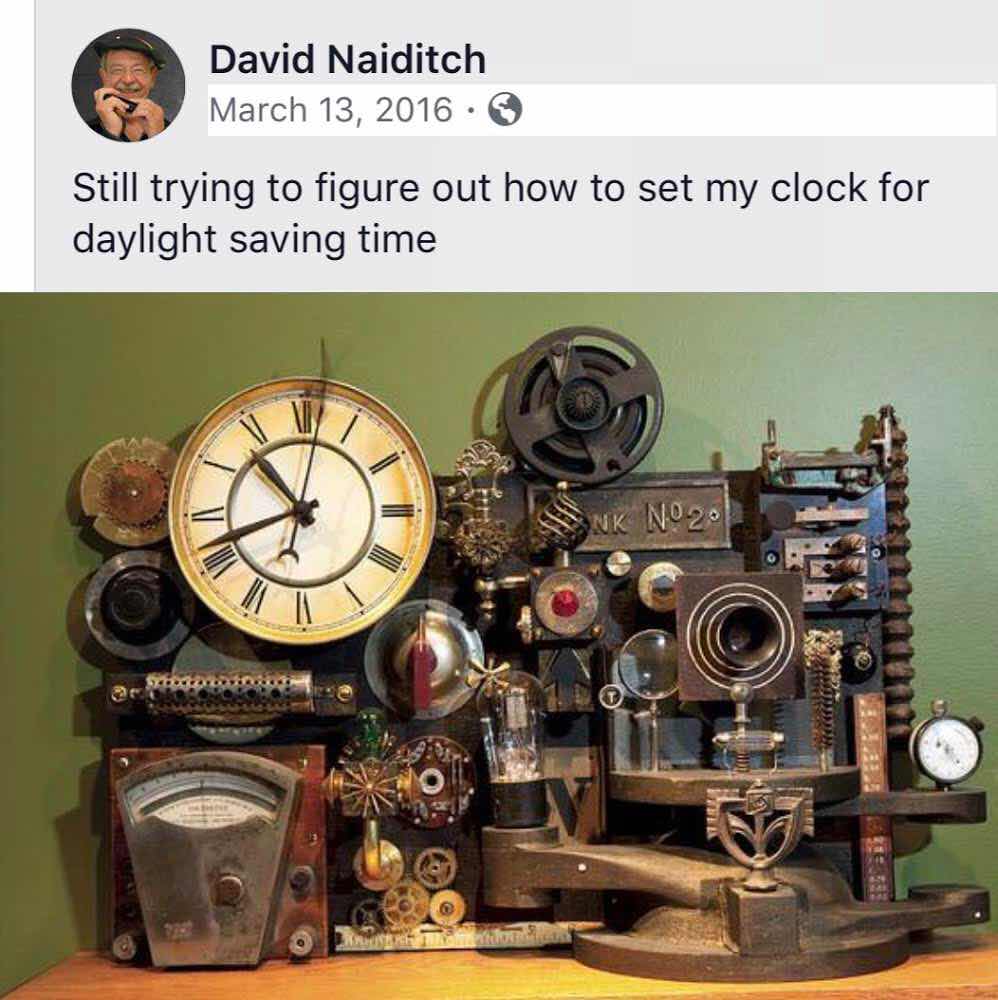 Ok, so most of us don’t have some advanced steam punk clock to adjust and we just have to get our internal clocks to adapt as well.  However, I did see on some Facebook post, that some organizations have a much more difficult time in moving their clocks forward and back.  I had no idea that something like  this was needed.  Hmm, in reality, we know the stones and the sun know anything about our daylight savings rituals and don’t need adjusting! 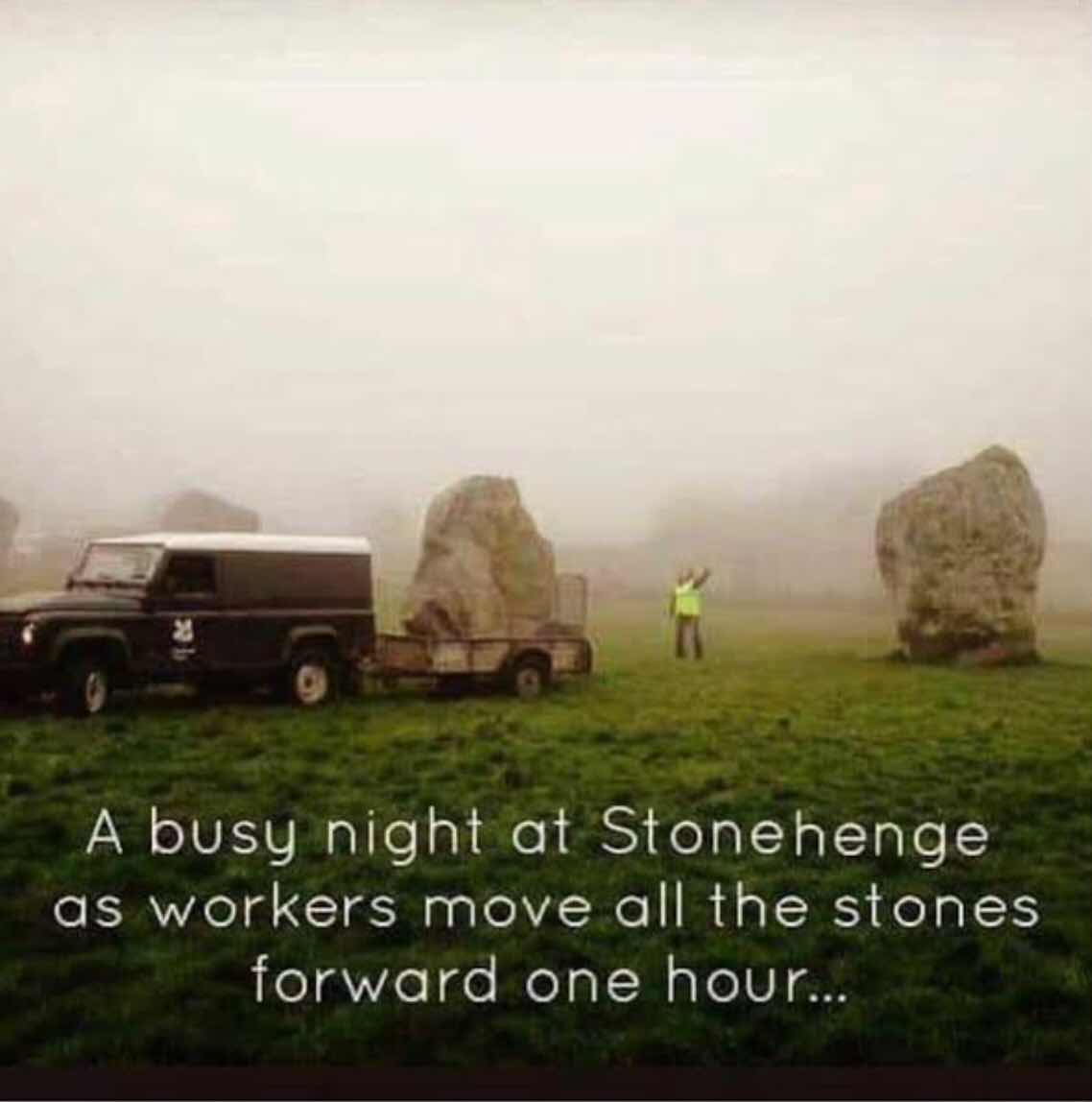 Ok, let’s get a little more serious and take a short look at the new finding that as white dwarfs cool they go through a phase change. Normally, you might think as a white dwarf, which has burned up all its nuclear reacting hydrogen, will just slowly cool down by radiation cooling.  But if the white dwarf goes through a phase change, sort of like liquid water freezing into ice, the temperature will be slowly dropping, and then the temperature decrease flattens our, yet heat continues to be lost to space, until at the end of the phase change, the temperature starts to decline again.  Well, this is exactly what has been observed to happen with white dwarfs as explained in this Physics Today article by Mark Wilson.  So this tells us the remnant star is sort of freezing out, even though it is still many thousands of degrees hot.  So, it becomes something like a big crystalline structure.  Pretty neat; and all what is happening inside the star is known just by monitoring the temperature. 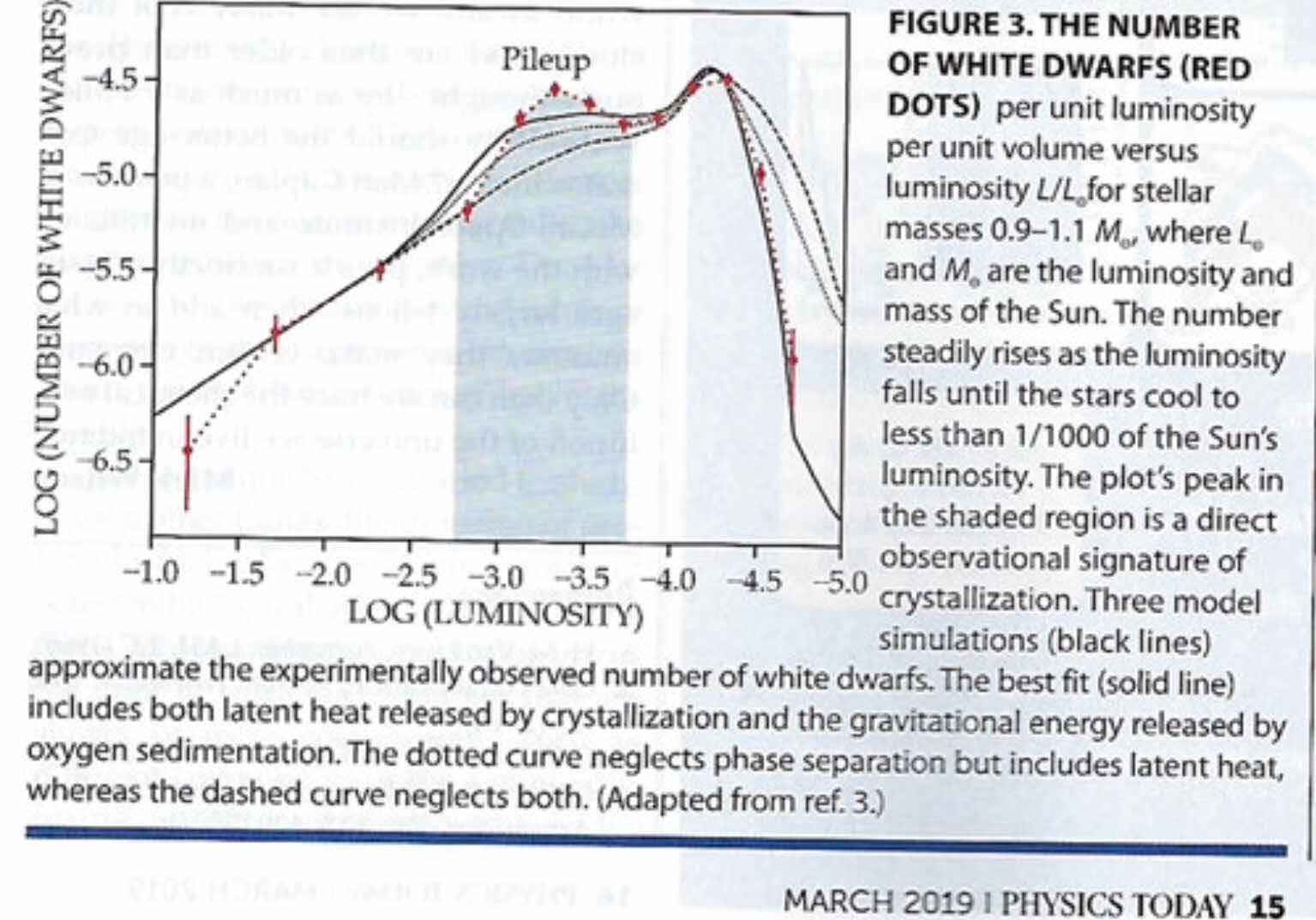 Ok, no more reading the literature because it is time to pack our Alaska bags and time just to take in the 2019 UCI Reines Lecture, where Dame Jocelyn Bell Burnell speaks on her involvement in discovering pulsars.  As a doctoral graduate student, more than 40 years, Jocelyn peresevered in a field dominated by men and dominated by thinking that did not much support women in that field, and earned a PhD.  So when the Nobel prize in 1974 recognized the importance of pulsars to astronomy, Jocelyn’s impact was essentially ignored and some say her contributions were snubbed because she was a woman.  Nonetheless, she continued working in the field and was just awarded a $3 million Special Breakthrough Prize in Fundamental Physics.

When Jocelyn took to the podium, she was just an elegant lady, who seemed to just be some grandmother who gently took us on a journey through her early discovery.  She told of her determination to succeed in astronomy, a field that she loved and wanted to be a professional astronomer, and that no one or no thong was going to stop her and was not deterred by any impediment thrown in her way.  She has spent much of her time helping to help more women in their journey on becoming scientists.  Pretty neat and thanks for showing your gentle courage and determination to succeed, not by interfering with others, but just by continued pursuit of the goal.  She is such a dynamic scientist and I thouroughly enjoyed listening to her story! 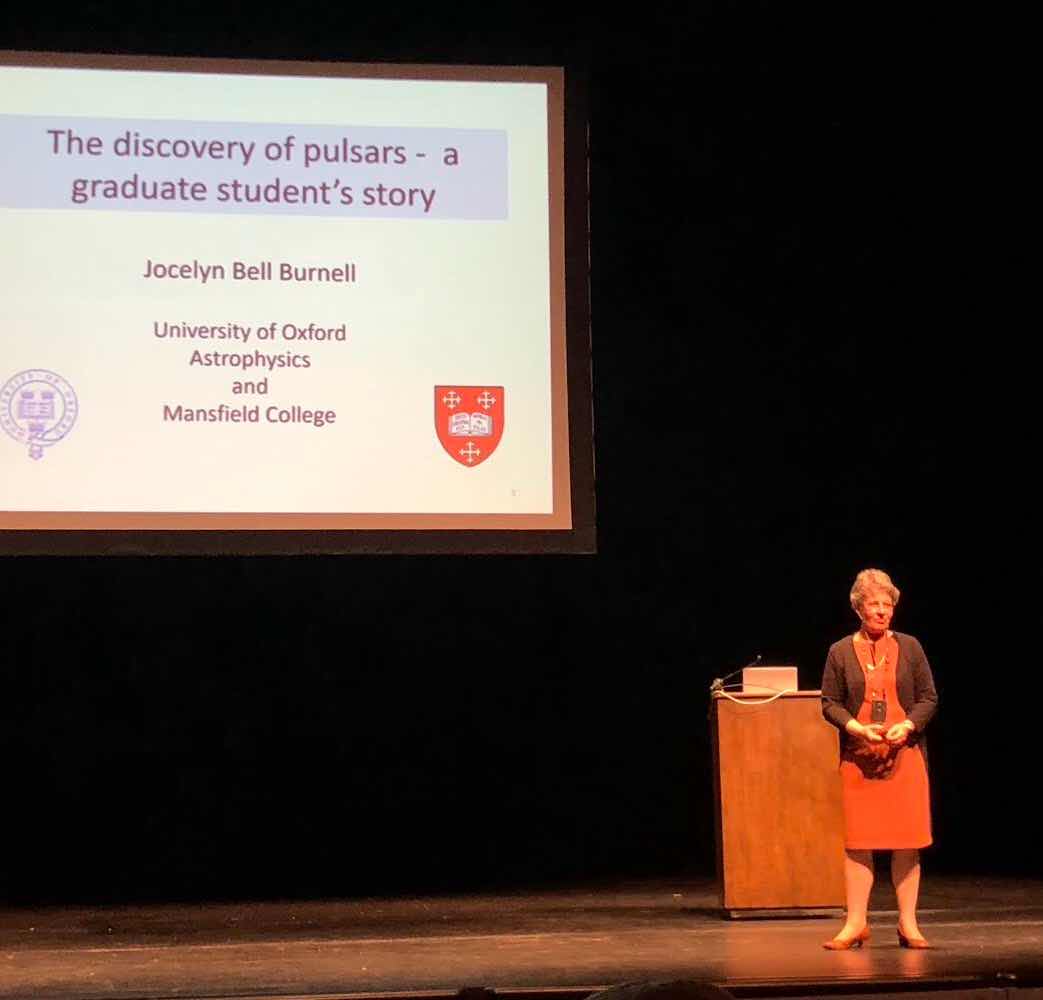 Check out other postings on this blog at www.palmiaobservatory.com