Hey, the sun has some spots now; Why is the universe so smooth? Falcon 9 booster on barge; Ways of making Starlinks darker; Hooray, the sunspot is visible! Fun at the beach, finally!

Greetings from Palmia Observatory
Well, the sun has woken up a bit and has a visible sunspot, so when the clouds thin out let's take a look, but while we wait we can report on other astronomy news, until, hooray, the clouds depart!  Here is the screenshot from the iPhone app SoHO showing the now visible sunspot.
While we wait for the clouds to go away, let's take advantage of our at home time and review a couple of interesting slides from the UCLA Astro-140 class. This set of slides really explained how inflation is used to explain why the large scale universe is so smooth.  Recall that the puzzle is that examination of the Cosmic Microwave Background (CMB) is how does it look to remarkably similar, at very close to the same temperature across large distances of the sky.
In the slide below, Professor Malkan shows two regions of space, A and B, which were supposedly widely separated at 380,000 years after the big bang when the CMB was first fixed.  Then as we measure the temperature today for region A and B we find how close they agree even if they originally have had no close contact with each other.  How to explain this finding?
We see the answer as proposed by the theory of inflation in this next screenshot.  Here we see where the two regions, A and B, were initially very close together and interacting and so were at the same temperature.  Then after inflation occurred, yet to be fully understood, the two regions were wildly expanded and separated so that when we look at those regions today, yes, they are very close to the same temperature.  Ok, now we just have to figure out why inflation started and why and how it stopped?

Ok, we can't solve the theory of inflation, so enough of astronomy lectures for now, in other SpaceX news, we tried to catch a look at the latest launch of Starlink satellites, but the clouds stayed around for the several days that they were predicted to be visible here in OC.  Nonetheless there was other news and here we see a photo from former OCA newsletter editor, Pauline, who posted this picture of one of the Falcon 9 first stages on its landing barge coming back into port.  Thanks, Pauline!
We might also mention again here the continuing concern from the astronomical community regarding the impact of the whole constellation of Starlink satellites.  This screenshot capture from James Lowenthal's presentation at the AAS 236th meeting, shows some of the mitigation techniques being considered by SpaceX.  We heard about three techniques being proposed.  One was just coating the Starlinks with black non-reflective paint.  Another was to use a deployable sunshade, called VisorSat,  which would block incoming sunlight from reflecting off the satellite.  The third approach just used control of the spacecraft orientation to position the solar panels away from the normal reflective position for portions of the orbit to again minimize reflected sunlight from interfering with ground based telescopes and observers.  Lowenthal explained that this orientation maneuver, used primarily during orbit raising operations, was such that it did not interfere with the operation of the satellites.  Pretty neat!  Time will tell how well these approaches will help mitigate interference with astronomy.  One thing for sure, is once the satellites get raised to the operating altitude, they will not be naked eye visible.
One last piece of SpaceX news, we see in this tweet by Elon, that he is not afraid of controversy and comments about social conditions too.  We already know that he is a very creative, innovative genius who has changed the direction of space exploration.  Here he is commenting on how selling weed used to be a felony and now during the pandemic it is legal in many states and even classified as an essential business, yet the effects of previous judicial verdicts impact many people.  Hmm, yep, maybe there is room here to review what to do about the laws and penalties in this and similar cases.  Time will tell! 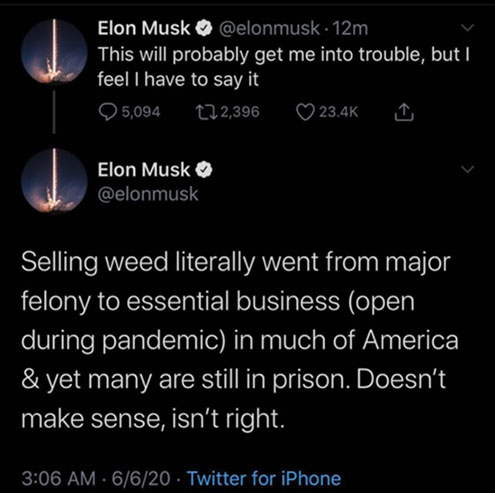 So, that is the SpaceX news for this week and the weather forecast for viewing the sunspot is looking pretty good for the next couple of days.  So, given that we are tired of being stuck in our burrows and hearing that the Las Brisas restaurant in Laguna Beach, overlooking the ocean, was open for sit down dinner, we were ready to go.  Well, this was good news, so Resident Astronomer Peggy and I met up with some other OCAs, Scott and Sandy, for dinner and drinks as we listened to the waves crashing on the shore.  Very Nice!  It sure helped brighten our spirits to enjoy good food, good views and good friends, out of our burrows!
Ok, after the rejuvenating dinner and now that the clouds have gone away, let's go outside in the morning and take a look at the sunspot.  The first attempt was with DSLR with 300 mm telephoto lens on the flimsy tripod.  Hmm, in this sort of overexposed image, it was just impossible to see the sunspot.  Why was that?  I wished I had taken a few more images with shorter exposure times just to make sure the image was not saturated or was it that the sunspot was just too small to show up in a 300 mm image?
Let's estimate how many pixels would be covered by the sunspot.  Using the previous NASA/SDO image, we can estimate the size of the sunspot.  The sun diameter is about 30 arcminutes.  The screenshot image has sun diameter at about 503 pixels and the sunspot diameter right at about 4 pixels.  So the angular size of the sunspot is 4 / 503 * 30 * 60 = 14 arcseconds.  The DSLR image above has 5136 horizontal pixels and the sun diameter covers 619 pixels.  So, the diameter of the sunspot, although it can't be easily seen, would only be about  4 * 619 / 503 = 5 pixels.  Hmm, so the sunspot could be in the image, but I could not find it.  Let's try another longer focal length lens and see if we can get more detail.  For the next trial, I just used the Nikon P1000 camera.  This camera has a much smaller sensor size than the usual DSLR camera, but has much longer effective focal length.  Check out the Nikon f/8, 1/500 second image below.  Hooray, this image is full scale and you can see much more detail including the sought after sunspot!  In this image taken with a longer focal length, the diameter of the sunspot is now 35 pixels, or more than 7 times larger.  This image also appears to be rotated 90 degrees with respect to the NASA/SDO SoHO image, but it was good to finally see the sunspot.

Finally, after getting the sunspot image, I had forgotten about a special little device, called a Sol Searcher, which is used to help point the camera directly at the sun without actually looking at the sun with your own eyeballs.  It is a great little tool when out in the bright sunlight.  I had not used the device this time because I had lost track of where it was, so I just jiggled the camera back and forth and up and down until the image of the sun showed up in the LiveView screen.  It is much easier to position the camera using the Sol Searcher, so I went to my friends at Amazon to see if maybe if the device was cheap enough, I might just get a second one.  Wow, the Amazon search page showed a whole range of other Sol Searcher products, mostly bikini swimsuits.  Hmm, good thing this didn't show up the first time I searched for and purchased a Sol Searcher, or I might have considered switching hobbies!
Until next time, here from our burrow, stay safe, but it's time to recover more of our freedom,
Resident Astronomer George
Be sure to check out over 400 other blog posts on similar topics
If you are interested in things astronomical or in astrophysics and cosmology
Check out this blog at www.palmiaobservatory.com
Posted by Palmia Observatory at 6:56:00 AM