Catching up on our recent journey around SpaceX headquarters; Trying to capture full moon at the horizon; Volcanic eruption on LaPalma Island; Next Blue Origin Launch; Getting ready for ZERO-G!

Well it has been several weeks between the last blog post and today we can catch up on some late news.

First after seeing this photo showing the 100th SpaceX Raptor engine produced at the Hawthorne facility by July 21, 2021, I said let's go down and see that location.  Raptor engines are used on the Starships that launch from Boca Chica, TX. Well as you can see the photo was taken outside with a Falcon 9 booster in the background.  This booster was the first Falcon 9 that in August 2016 delivered its payload of satellites into orbit and then was successfully recovered, which demonstrated the reusability of the Falcon rocket.

Hey, that rocket is located somewhere near SpaceX headquarters in Hawthorne, CA, and we should drive down there and take a look around.  Hawthorne is only about an hour drive away so let's grab a camera and head on down.

SpaceX headquarters and manufacturing space is along Jack Northrop Avenue and Crenshaw Blvd., just south of the Hawthorne Municipal Airport as shown in the map section below.

Well, getting to Hawthorne was relatively easy, but parking is not at all easy.  I finally just parked in a spot a block or so away that just said "Customer Parking Only."  Anyway, I was only there for 15 minutes while I walked back up to the corner of Jack Northrop Avenue and Crenshaw Blvd. to take a quick photo of the Falcon 9.  Hey, I was photobombed by a truck that sped through the intersection!

I would have liked to get inside for a tour but that was not possible.  Here is another photo of the Falcon 9 with landing legs visible.  There was no traffic on Crenshaw at the time so I just rolled down my car window and took a shot.

On the other side of Crenshaw is this large parking structure for employees.  I apparently missed the visitor parking sign somewhere around there and that structure might be a place to park.

There is a lot of manufacturing buildings north of Jack Northrop Avenue and to the south is this large diameter pipe that runs along the length of the whole avenue.  Again, there was no one behind me, so I just stopped in the street and took this photo.  It turns out, later in the day, I found that this pipe was used as part of the initial concept test track for the Hyperloop train concept in 2016, where a train car rides inside the evacuated tube and can travel at very high velocities.  Thanks to Gravity Guy and part-time Las Vegan, Ken, for that info!

By the way, if you are wondering how you transport a Falcon 9 from the factory to Kennedy Space Center, for example, check out this Aerotime Extra image of one Falcon 9 on the road in April 2018 timeframe. The rocket is 70 meters long and 3.7 meters in diameter.

Ok, that was the little road trip to take a look at the Falcon 9 booster in Hawthorne.  This week presented another opportunity to try to capture an image of the full moon just as it rose above the horizon, and hopefully we would be located just right to have some object, like a transmission tower in this distance.  Well, the moon rose right on schedule, but as you can see, there is nothing in front of it, except the distant hills. The moon at this time is just a little over 3 degrees above the horizon, so this viewing location gives a pretty good horizon view.  You can also just barely see a row of house lights at the bottom of the distant foot hills.

Within just a couple of minutes the full moon his risen completely above the horizon.

In other astronomy related news, we have been following the eruption of the volcano in the Canary Islands.  This volcano is on La Palma Island, which is also home to many large telescope observatories.  Check out this view of the Nordic Optical Telescope, where the observatory is located above the clouds.  La Palma might also be the future home of the 30 meter telescope if the negotiations to build it in Hawaii break down.  Hawaii is still the preferred location because it is a little bit higher in elevation and more conveniently located for US and Asian partners.

In this image from the NOT twitter feed you can see the volcano in the distance.  As you can read, the observatory staff is safe and the observatory is not threatened.  We did hear though that the volcanic dust is so thick that the La Palma airport has been forced to cease operations..

The Inspiration 4 astronauts have completed their successful three day mission orbiting the Earth.  Now Blue Origin announces the next New Shepard launch with four paying customers on board will take place on October 12.  It is not clear how much it costs to go up on this 11 minute rocket ride.

It might be nice to get back down to Van Horn, TX to see the launch, but the only parking available is just to pull off the road somewhere along Route 54 and this little road might be a big traffic jam and parking lot. 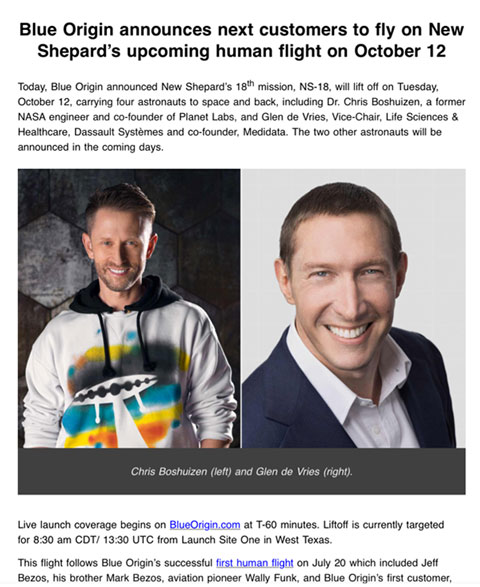 Ok, ok, so we have had two recent rocket rides where private individuals have achieved short zero-g flights and one group, Inspiration 4, who have actually orbited the Earth.  The costs of a ticket to ride on those rockets is way too much for most of us, but as we reported last month, hitching a ride on an airplane that enables brief periods of weightlessness is more affordable.

Next month, this Resident Astronomer and Science Nerd, Scott, hope to be taking a ride on the ZERO-G aircraft, sometimes called by its less appealing name, the Vomit Comet.  There are probably still some seats available on our flight for one of you adventurers.  Anyway that date is fast approaching and we continue to look for other personal accounts describing what the ride was like and what others made of the experience.  This YouTube video by Veritasium, provides a good account of what the ride is like.  Although it sounds interesting to try to follow a glob of water, falling in zero-g, and swallow it, the idea of what else might be floating around in the plane sort of cools off that idea.  I'm not sure if other flight participants want any liquids floating around inside the cabin either.  Anyway, as described in this video we maybe can just conduct some conservation of angular momentum and instability experiments.

You can check the other details in this "Drinking in ZERO-G (and other challenges on a trip to Mars)" at: https://www.youtube.com/watch?v=SAQ-iIJkLzA

Resident Astronomer George
Be sure to check out over 500 other blog posts on similar topics
If you are interested in things astronomical or in astrophysics and cosmology
Check out this blog at www.palmiaobservatory.com
Sign up for email alerts at:Palmiaobservatory+subscribe@groups.io