It's been poor weather for night time observing for about 3 weeks now and too hot for any solar observing.  Luckily, the OCA star party on Saturday had pretty decent weather and we had fun there.  But first before talking about that, lets first check the calendar.

Where are you going to be Saturday, July 15?  Well, be sure to check what New Horizon's spacecraft phones home about the environs of Pluto.  What will we see?

Where are you going to be August 14-15?  If you're in the neighborhood check out the Star festival in Julian.  There will lots of scopes and a couple of days of vendors and lectures.  Should be fun if
the weather cooperates.  If not the event is held at the Menghini winery, so no problem.  Also, there should be some good old fashioned Julian apple pies no matter what.  We will see you there.

While we were waiting for the weather to clear up, I attended a lecture by Joe Kirschvink, professor geobiology at Caltech.  He and his coauthor Peter Ward penned "A New History of Life".  Their major argument is that life on Earth could very likely have originated on Mars.  Now I was not totally unfamiliar with this type of concept because of a book that resident astronomer Peggy had in her bookshelf.  Since her previous work was in psychotherapy, a book titled something like "Men are from Mars, women are from Venus", was not unusual.  Well, I'm not sure what I got from that book, but now Joe argues that everyone, in fact all of life, men, women and microbes, could have started on Mars and been transported to Earth.

The argument begins with a reminder of the Miller-Urey experiment in 1952 where a mixture of methane, ammonia, hydrogen and water was exposed to simulated lightning.  The finding of amino acids in the mixture accelerated a long investigation of how biochemicals could have got started.  After a number of years, geochemists determined that the early Earth's atmosphere would not of had that sort of atmosphere.  So the search was on for other mechanisms for now amino acids could be formed on the prehistoric Earth.  Well, in the intervening years other mechanisms including Mars as the source were proposed.  With the findings from Mars rovers it was deermined that early young Mars would have had that type of atmosphere, and the recognition that meteorites from Mars have been transported to Earth, then it seemed entirely possible that amino acids, maybe even life could have originated on Mars and then came to Earth in meteorites.  Joe's argument is that many meteorites from Mars have made it to Earth and an examination of the impact of being blasted off into space, subjected to high radiation during the trip out of Mars low gravity field and finally into Earth's gravity field, decelerated and heated in the atmosphere and make it to the surface, that the forces and environment need not to have been severe enough to destroy the organic matter.
It seems it's totally feasible.  We will have to wait and see how the evidence falls out.  Check out the book if you're interested.  It's a popular book and not overly technical.

Speaking of evidence, I picked up another great book for amateurs by Robert Buchheim, "Astronomical Discoveries You Can Make Too".  Bob is the OCA secretary and is quite an accomplished author.  This latest book is really great.  He explains over the course of about 36 experiments that amateur astronomers can perform in their backyard on their own and repeat some of the key discoveries made in the early history of scientific astronomy, such as the length of the day, the orbits and sizes and distances to the moon, the speed of light, orbits and sizes of planets, periods of pulsating stars, spectrum and redshift of galaxies, and many more.
Pretty neat stuff.  All of which I kind of wanted to do in some fashion on my own as a way of learning the physics involved in these discoveries.  Bob lays out the equipment needed, preparation time needed for each experiment, the hours of observing needed, the hours of post processing and data analysis needed to repeat these major discoveries.  It turns out you can do most of these experiments with amateur equipment.  Yes some do the experiments need a CCD camera, rather than a DSLR, and maybe 10-12 inch apertures, but still just reading through how to make these measurement is really neat.  Some of the experiments take many hours of camera time and often need separate observations taken over periods of months.

Wow, I'm tired just thinking about all of this work.  Let's get back to the fun OCA star party.  There were lots of scopes there and several folks just interested in seeing what it's like to look through a telescope.  Amateur David was there with his goto Celestron and after hearing of my frustration getting a good alignment, passed on the reference for a YouTube video that laid out how to do alignment.  David has used it with good success.

Good job and thanks David.  I looked up that YouTube and found one specifically tailored to my polar aligned mount.  I'm finally beginning to see what I had been not doing and what I had been doing that was wrong.  Amateurs just keep learning.

Anyway, I didn't need a good alignment at the time, I still wanted to get an image of Venus, which is still very bright even during this crescent phase.  See the image below. 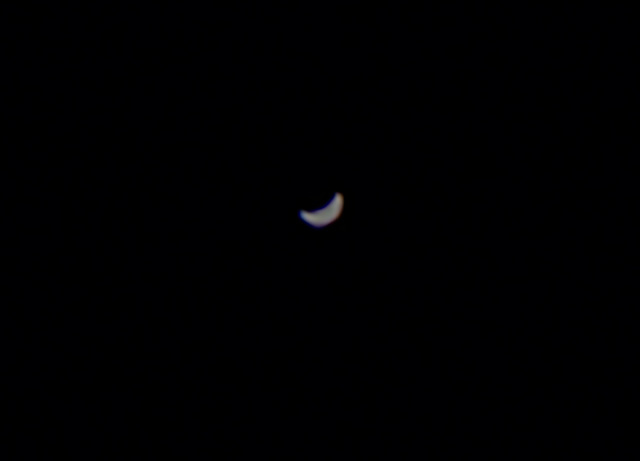 Peggy enjoyed scanning the sky with her binoculars and visiting with the other amateurs.  The image is pasted below and a a lot of folks, especially the young kids, enjoyed seeing Venus and Jupiter.

Also, as a bonus image, I wanted to repost an image originally taken from the airplane as we flew past Las Vegas. 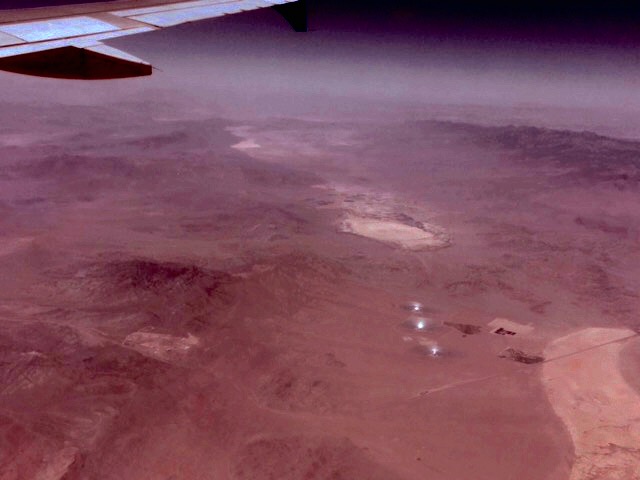 I just did some photo processing to adjust the contrast and such to show the 3 bright spots and terrain.  The diagonal linear feature at the bottom right hand side of the image is Interstate 15.  Remember the image was of the Ivanpah solar power plant, which uses over 173,000 heliostats to focus the Suns energy on three towers that operate as boilers to generate up to about 390 megawatts of electric power.