Wind Power 2017 conference; Will the solar eclipse cause a utility backout? Upcoming AAS and SAS conferences; Seeing the back far side of a neutron star; Angular momentum and magnetic fields affect cloud collapse star formation; Ruby pokes her nose into general relativity


Well we missed out on what we hope was good weather at OCA Black star canyon because of vacation travel and now both of us have been ill and not filled with a lot of energy to do much of anything.  We're on the mend, but I didn't really have much desire to pack up the scope and do any observing.  My plan was to spend a couple of leisurely days just wandering
around the Windpower 2017 trade show in Anaheim since that could be fun and doing something in wind energy had always been one of my dreams.  But before talking about that and other study activities, we should check out the upcoming calendar of events.

The first event in this calendar is The American Astronomical Society general meeting which will be held in Austin, TX, June 4-8.  I know a few of you are considering going and I hope to see you there.  The AAS general meetings are always a good mixture of highly technical sessions for specialists and more general sessions for more general interest astronomers and I have always had a good time.

If flying to Austin is not in your cards, then you might want to consider the second item on our calendar which is the upcoming Society of Astronomical Science 36th annual symposium, which is held in Ontario, California, on June 15-17.  This symposium and workshops is structured for amateur astronomers with presentations mostly by amateurs and covers some of the very professional science type activities that members describe and show the results of their observing skills.  The presentations will cover variable star observing and light curve magnitude measurements, spectroscopy, and search for comets and novas.  This conference is inexpensive (now $75 for late registration) and I always find it very informative and it is so neat to hear what other amateurs are up to and to recognize with just a little bit more practice we each could be doing the same type of exciting things.  I know several OCA members will be there including the former OCA Secretary, Bob Buchheim, who is in addition to being the SAS president, is also a widely recognized author of amateur astronomy books and is always helpful and supportive of new amateurs.  I hope to learn more about doing my own variable star light curve magnitude measurements and some tips and feedback on doing stellar and galactic spectroscopy.  Check out the symposium details at the society website: http://www.socastrosci.org/symposium.html


Now as I said earlier, my dream of working in the wind power industry is not to be and I found that just after attending the morning session I was all tired off and took the rest of the day off.  I at least found that I could fill in for the "I" in "wind", but that was about it.  See photo below.  One interesting new technology that I thought was really neat was a company that offered an aerial drone that could fly autonomously and once pointed at a particular wind turbine tower, would fly on its own and inspect all leading and trailing edges of the turbine blades and generate a report and fly back to the launch site and land, all on its own.  These new technologies are helping to keep lowering the cost of wind generated electrical power.  It was neat to see all of the new technology and hear that wind has now become the largest renewable power generation source in the US.  California, a state whose economic GDP alone, if it is compared to other countries in the world, represents the sixth largest economy in the world, and state officials say that they still plan to implement some of the most aggressive clean energy plans in the nation, regardless of the lack of support or at best lukewarm support for green energy at the federal level.

Speaking of renewable energy, I saw an interesting article from the California Public Utilities commission that the upcoming solar eclipse in August, which will result in partial obscuration of the sun here in southern California between 60-70 percent, is expected to put a high strain on the electric utility system because of the loss of solar photovoltaic power generation of about 5,600 megawatts during the eclipse and maybe also a momentary drop in wind power as well.  Customers will probably be urged to defer using electrical appliances during that time and other gas fired generation will have to be scheduled to be online during the eclipse to make up the difference.  Wow, pretty neat, I had not considered the effects of the eclipse on the electric power system.  Maybe we will see more of a blackout than just that due to the sun being obscured by the moon for a bit!  Resident Astronomer Peggy and I are not taking a chance on that and will be in Casper, Wy, hopefully to see the total, 100%, eclipse!

So, back to other astronomical issues, since I am still a bit tired from this last illness, I didn't do any telescope observing, but did cover a couple of interesting targets while resting and reading in my armchair.  This month's issue of Sky and Telescope showed this interesting diagram of how light rays are deflected around objects having high gravitational potential like neutron stars for example.  Note how some light rays from the far side of the object can be bent and deflected so that they stream right into our observing eyes and the larger the mass of the object, the more we can see of the far side.  Pretty neat.  I flagged this topic for more study when I return to my general relativity studies later.

Another topic I followed up on in my armchair was this notion of how planets form in the proto disk of young star formation.  This interesting topic came up during the recent AAS Planetary Habitability conference in Palm Springs.  There it was noted that when a new star forms the material in the disk can also coalesce and form planets in the disk at the same time.  To follow up on that topic, I opened up my "Principles of Star Formation" textbook.  See below. 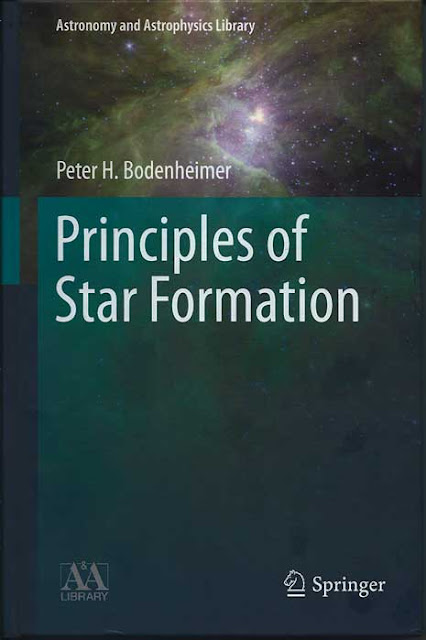 The whole process by which large molecular clouds, very cold at say 10-20 K, collapse is very complicated   As the cloud collapses under gravitational attraction, the process is resisted by angular momentum and the increased thermal energy of the cloud.  Eventually the cloud collapses to a central core surround by a massive disk, which is also where planets can condense out.  The problem is that these early formed systems have been observed somehow to have been able to transfer most of their angular momentum from the collapsed core outwards in the disk.  How this is accomplished is not really understood.  In the case of our own solar system, the sun itself has little of the original angular momentum with most of the momentum being conserved in the orbital rotation of the outer planets.  There seems to be quite a bit of evidence that suggests that the angular momentum is transferred outward in the collapsing disk by interaction of the primordial magnetic field from the protostar and ionized matter further out in the disk.  The textbook has several chapters on theory and observation showing how this might be accomplished but it is quite dense and difficult reading.

An easier topic is how the inflow of collapsing gas and dust is matched by feedback processes that tend to prevent the infall of matter because of the stellar wind from the young protostar.  These feedback processes become especially important as the young star begins fusion and the resulting radiation pressure prevents and pushes the remaining gas and dust away from the young star.  The figure below, courtesy of the textbook, shows the inflows and outflows around the protodisk around a young T Tauri star.  Remember as we discussed in the previous post of January 6, 2017, that these prototypical stars are young stars where fusion has not yet started and yet they glow because of energy released during the gravitational collapse of the molecular cloud in which they form.

﻿﻿
The outflow of hot gas and radiation jets from the poles of the young star is somewhat visible but when the jets collides with other material, a bright emission nebula can be observed.  Many observations of these types of object called Herbig-Haro objects or HH for short are found, in fact over 400 objects named accordingly HH1 through HH400.  HH objects are often found in regions having high rates of star formation and are often associated with Bok Globules.  We originally mentioned Bok Globules and shared a HST image in the January 25, 2017 post.  I still am wondering if HH or Bok objects are visible with amateur astronomical setups.  If anybody knows, let us know.  In the meantime, some further information and images of HH objects can be found, courtesy of Wikipedia, at: https://en.wikipedia.org/wiki/Herbig%E2%80%93Haro_object

Finally, since the night sky has turned very cloudy and I am still in resting mode, I wanted to get back to my general relativity studies and my current general relativity text, "A Most Incomprehensible Thing", especially after reading the Sky and Telescope article referenced earlier.  I was trying to see if the predicted light ray path from a point on the far side of a neutron star would just follow a geodesic computed using the Schwarzchild metric or if anything else was also required.  Surprisingly, even Astronomer Assistant Ruby showed some interest in the text, or maybe it was just that she was bored and wanted to play, which is why she just jumped up on my lap!  Evan though each time I open up my GR books I learn a little bit more, it is also a welcome relief to be interrupted.  So I just put off the general relativity question and just relaxed with Ruby.