Well this has been a week of not many astronomical observing opportunities, but many new opportunities for new theater productions, new lectures on earthquake risks, and new courses on quantum optics.  Oh boy, I can just hear you saying!  Anyway it is all in the week of the physicist wannabe and sometimes actual astronomical observer.  First we had signed up for tickets for the production of "Tesla: A Radio Play", about a portion of the life of the brilliant, if
somewhat mysterious, not very business minded or successful, but very creative electrical genius,  Nikola Tesla, performed at the Laguna Playhouse.

As we were waiting for show day to arrive, I happened just by chance to see an episode of the Science Channel's "Mysteries of the Abandoned", which shows some of the most fantastic structures, that were constructed with high hopes and yet now lie abandoned, showed this large outdoor high voltage generator constructed as part of the Russian air defense system.  This system is a Marx generator, not a Tesla coil generator, but still generates a very impressive high voltage capable of creating quite a lightning strike.  I don't know about you but this is a fantastically beautiful machine, with its voltage equalization rings and smooth rounded capacitors!

Anyway, Tesla had big dreams too, and the radio play described events from his initial arrival in the U.S., his interaction with Edison and Westinghouse and other industrialists, and his remaining years up to his lonely death.  The stage setting included microphones for the radio actors and a table for the sound effects man.  He had a love interest, but for some reason could not reciprocate and he seemed driven to build his electrical dreams and took comfort from his pigeons.  Sad!  What he could of accomplished  and how his genius and dreams could have been turned into reality.  He is perhaps best known for the "Tesla coil", but his invention of 3-phase electrical power and machines is to me his greatest achievement and gift to the rest of us and made possible for modern civilization.

The actors did a fantastic job and conveyed the emotional scenes and dialog just with their voices as they took their positions at the microphones.  They made it so easy to follow the story and movement on the stage was not necessary.  There was not a dull moment anywhere in the production and the cast received a standing ovation.  Good job!


Yes, they actually operated the Tesla coil during the performance and it was pretty impressive, but if you like really big arcs and sparks then check out this short video showing the previously mentioned Russian high voltage generator.  Now watch the video and see what is a really big spark!


The other activity that took up one potential observing night was the lecture and wine and cheese and meat-on-a-stick soiree conducted as one of the many scheduled Distinctive Voices lectures at the Beckman Center in Irvine.  It is a good opportunity to meet and greet some of the other attendees and in this case I joined a table with Retired Big Oil Chemist, Gabrielle, who I worked with many years ago, and Retired NASA Spacecraft Control Engineer, Peter and wife Trina, who now raise Arabians for fun.  An interesting discovery, between plates of food and glasses of wine, was that both Gabrielle and Peter were youngsters in Germany during WWII and recounted their memory of bombs falling near and on their apartment houses and what it was like to grow up under those conditions and how they had to flee from the incoming Russian Army and eventually some years later to imigrate to the U.S.  Gabrielle told of some other folks, known to be Jewish, and how they could not go down to the bomb shelters during air raids because they would definitely be spotted there and arrested and had to endure the bombing alone  in their apartments.  Wow to have to endure the uncertainty of the bombing or the near certainty of being arrested in the shelter was a story I had not heard before.  They both indicated they had many remembrances and anecdotes and were being encouraged to write up their experiences, which to me too, would be a very interesting experiences to hear about and how as just young children they made sense of it all.

Anyway, the partying came to an end and we went into the lecture hall to hear a presentation by Jonathan Stewart, UCLA, on "Earthquake Resilience of California's Water Distribution System and Extreme Event."  He described how the three main aqueducts that bring water into central and southern California are susceptible to being disrupted by earthquakes, since they all cross over the San Andreas fault.  An earthquake displacement of just a few meters could disrupt the water flow for weeks or months.  In addition he said that even if the Colorado river aqueduct was not damaged, its water quality is not good enough to be relied on alone without being mixed with fresh water from the other two aqueducts.

So this risk is understandable and would be severe enough, but an even more devastating risk, even if more remote possibility, would be the collapse of the dikes in the Sacramento delta region.  I had not heard of this risk before but he said if this rare event was to happen its effects would be catastrophic for central and southern California.  A breach of the delta dikes, which protect much farmland that is below sea level, would result in flooding of the area with salt water from the ocean and this would contaminate the two large aqueducts with salt water.

Now this risk is understood and several proposals have been made to mitigate the risk by building tunnels to bypass the delta and bring fresh mountain runoff water more directly to the intakes of the two aqueducts.  I found the following chart, which shows the proposed $24-67 billion project building 35 mile tunnels as part of my after lecture research.  Whether this public works project ever gets built is an open question since the probability of the event, while quite low, would result in catastrophic damage over months of years for the state. 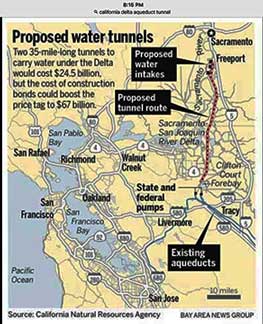 You might be wondering why is so much of the delta below sea level?  I found the following map which shows that a large portion of the delta is up to 15 feet below sea level.  The lecturer described how the use of the land, inside of the dikes, has resulted and continues to result in land erosion, which then requires building higher and wider dikes to withstand the condition.  There is so much land below sea level that if the dikes are breached the sea water flow will exceed the fresh water flow and the whole region could be flooded with sea salt water.

Now having lived in California for many years, I and we all know about the risks of earthquakes to our homes and understand that we still face the risk of the "big one", but to now see that their is an even bigger, long term possible catastrophe sitting on the time horizon, was not expected.  There is a lot of discussion on the internet if you are interested in finding out other details.

Wow, that is kind of scary, so we should change the subject and talk about a new, free course on "Introduction to Quantum Optics" offered by www.coursera.org and taught by world class Alain Aspect and associates.  You might have followed some of Aspect's experiments where he verified some of the strange quantum effects and Bell's Theorem and issues of non-locality and strange action at a distance, entanglement and single photon interference.

Coursera courses are free, online and available to use at your own pace.  The courses don't have much homework and just a few gentle quizzes to test your understanding.  My interest in quantum optics stems from my trying to understand how it is that quantum mechanics is described by the very deterministic Schrodinger equation and system Hamiltonian and nowhere is there any mention of the random, spontaneous emission process that is also so much a part of the quantum world.  What was I missing?  Where is how this random process incorporated into quantum mechanics and why hadn't I seen some description of it?  Well, the answer is that that topic is covered in quantum optics.


I've just started the first lesson and the outline right away tells the how an why that the classical description of electromagnetic waves, of great practical value for sure, is just not sufficient to describe and explain some of the more quantum mechanical features, such as spontaneous emission, but that this course on quantum optics will go into that subject.  I've mentioned Aspect's textbook before in previous posts and it looks like the course pretty much goes along the same track as the textbook, but to me just hearing some of the concepts explained in a lecture makes understanding the concepts easier than just trying to read the text. I really look forward to this course.  You can still sign up if it is not already on your schedule.

So, that is about it for this week.  The night sky forecast still shows cloudy, with just a slight chance of more drizzle so, no astronomical observing tonight.  Tis weekend looks to be clear, but I'm just going to start packing my bags for the flight to Austin for the 230th AAS meeting.  It should be a great meeting, see you there!