Greetings from Palmia Observatory (somewhere in the Arabian Sea on our way to Mumbai),

Well, we had an exciting day in Muscat, which sadly was our last day in Oman.  The ship tracker screenshot shows our current progress toward Mumbai, which will take one more day at sea. 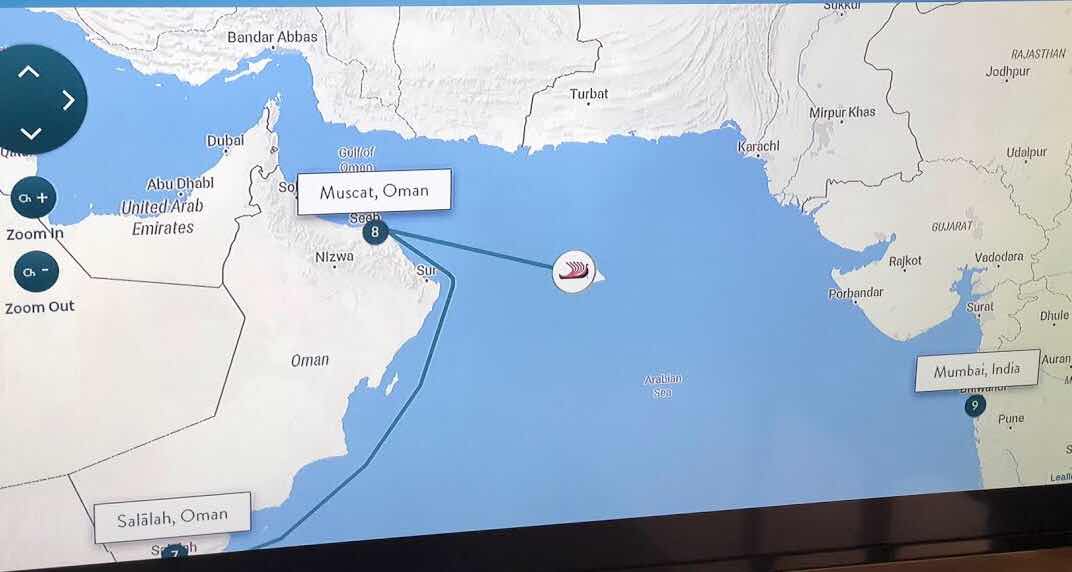 But I’m getting ahead of our story and so should start a little earlier in the week.  It seems everyday or every other day, our cabin steward leaves us one of these nasty little red cards that tells us that our ship motion is robbing us again of another hour of sleep. 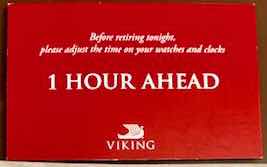 But for our arrival in Muscat harbor we are wide awake and ready for another exciting day.  The giant structure in the photo below, which looks like a giant incense burner, we learned is associated with a theme park nearby. 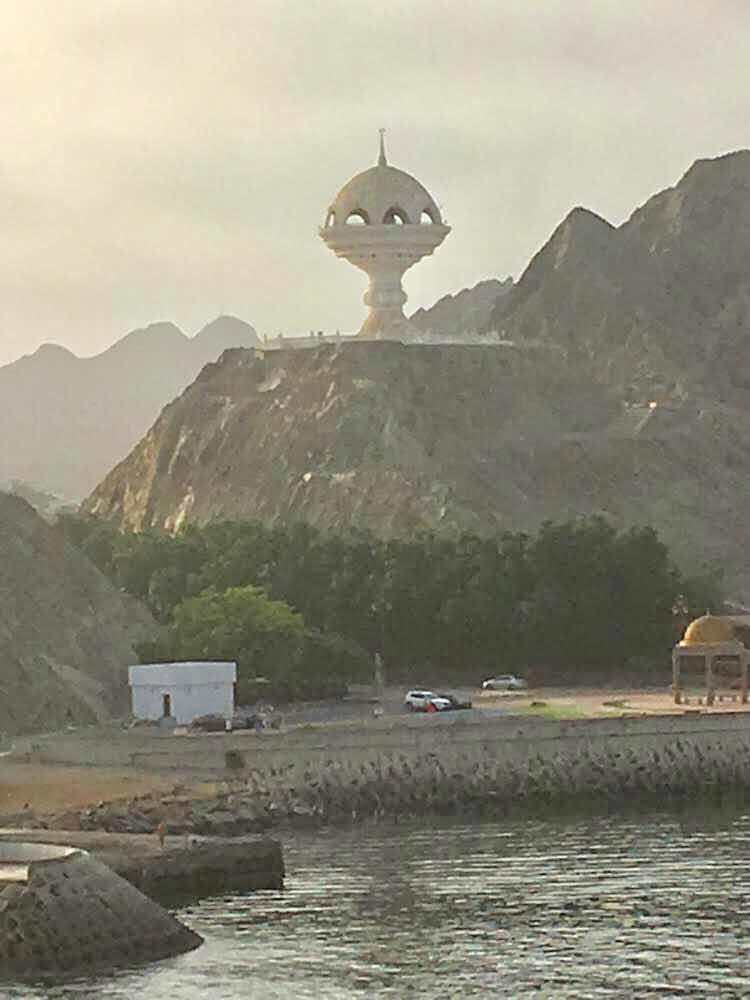 Also Muscat has had a long history of a sea power and was strategically located on the ancient spice trade routes.  The old fort on the hill, if I remember correctly, dates from the 16th century by the Portuguese. 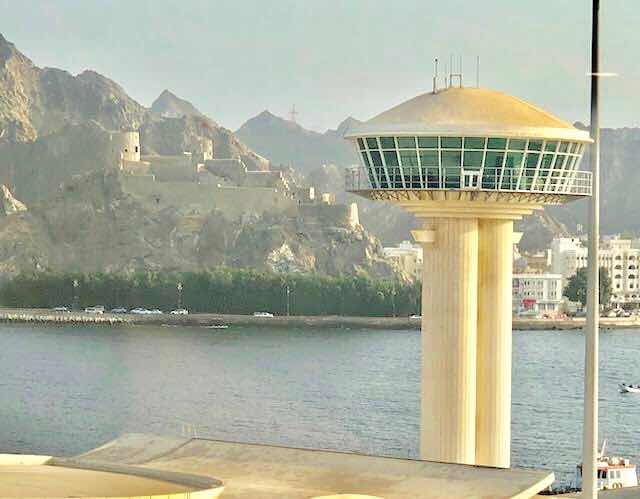 Ok, we arrive at rhe dock and we get to see all of the action from our veranda, while still in pj’s and robes.  The little lines are thrown ashore and then the heavy lines are hoisted ashore and fastened. 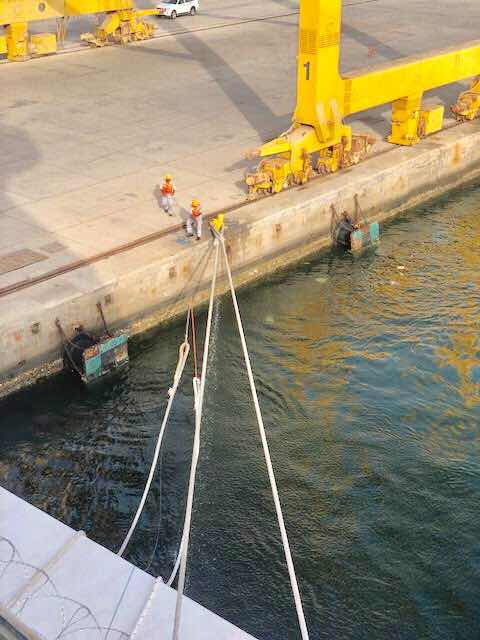 Several readers commented about my new Omani hat as seen in the previous post.  Well now, I’ve found how to turn that million dollar look into a million dollar idea.  Just by chance, I put the Omani hat on top of my wide brim sun hat and wore this fashion accessory on our short excursion.  Well, it caused quite a stir and all of our tour guides and guests really liked the combination and even souk vendors looked on in envy.  Check out the selfie portrait below taken in front of the Sultan of Oman’s palace. No, not the the pretty blond lady who almost photobombed my million dollar idea; look at the hat!  Hmmm, maybe I can patent the hat combination and come back to Oman and become a millionaire! 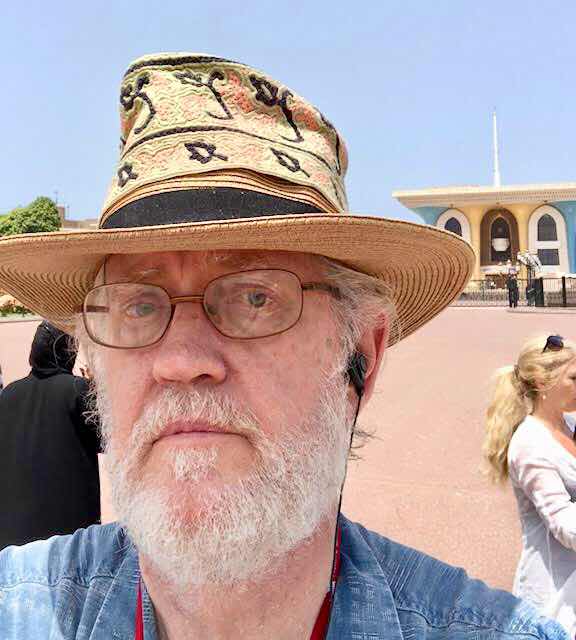 When we are not busy running ashore to experience the environment there, we can choose between many enrichment lectures and on this cruise Viking has included a resident Astronomer, John Maclean, FRAS.  I’ve said it before but this would be a great gig to have; sail around and give some lectures to the 900 guest between shore excursions.  Anyway, the photos below cover a portion of one of the lectures on the early Vikings and their astronomical myths and knowledge and how they could have used some of these techniques, including the “sunstone” to navigate by day and night, even in cloudy weather when they could not see the sun and at night, when the northern sky and midnight sun did not set enough to allow seeing the North Star.  The Vikings also saw a wagon instead of the Big Dipper that we associate with that group of stars. 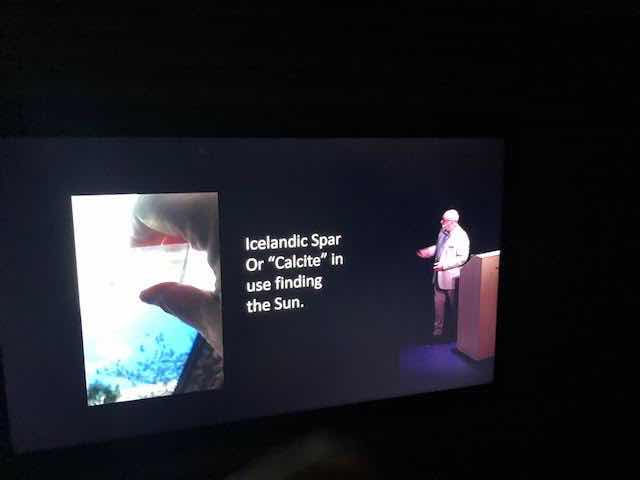 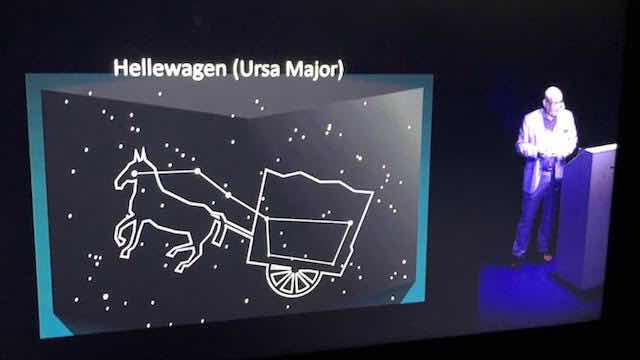 He also had a scope aboard for some visual observing, when the weather permitted.  He also was successful in getting some of the ship lighting on that portion of the deck shut down.  He also said that in the future many of these lights will have red light filters installed.  Hey, that will be a good feature for all the visual eyepiece observers! 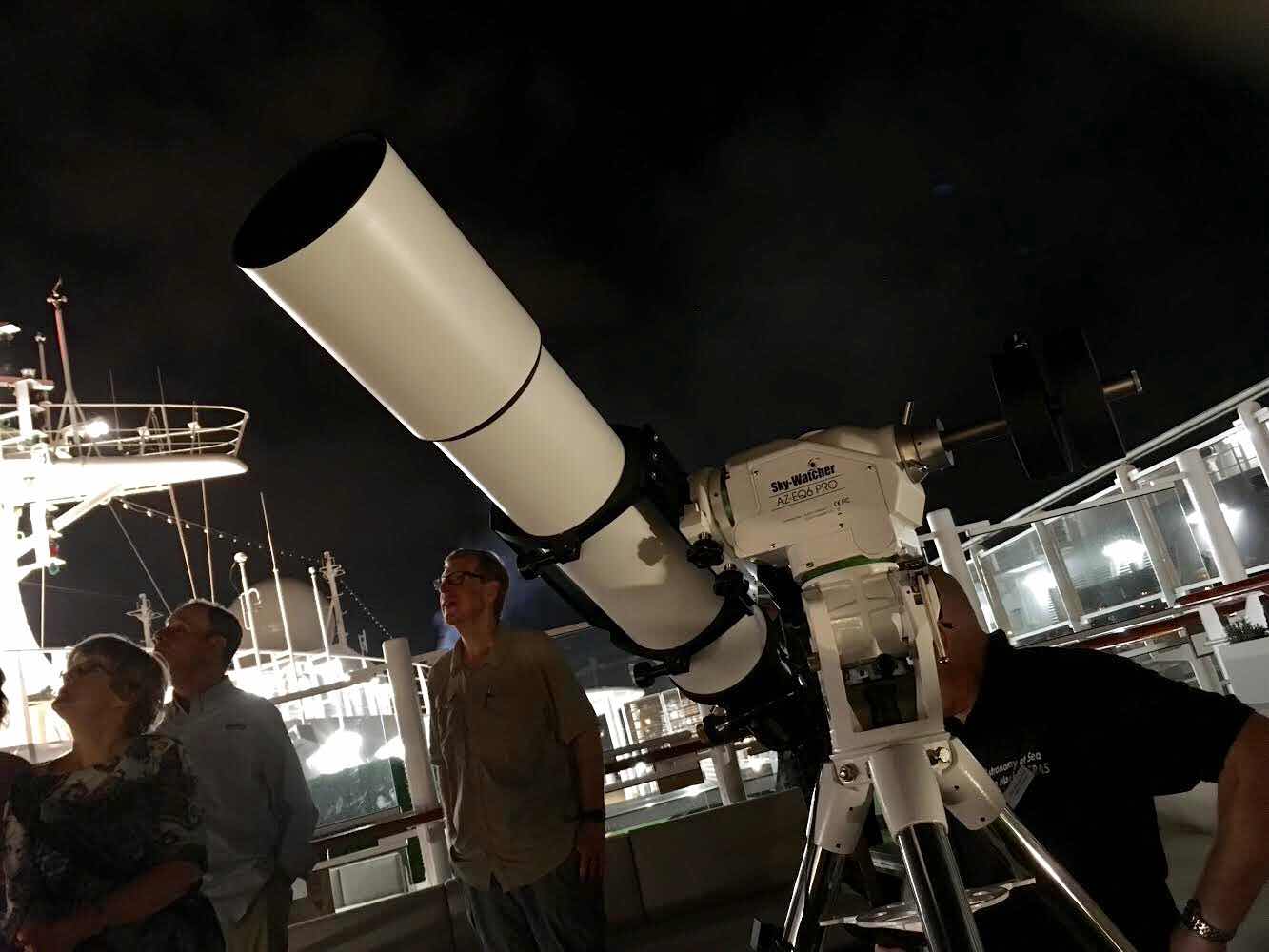 Well, as described previously with some of my attempts at getting some Milky Way images, all I brought aboard was my spindly legged tripod and a single 10mm lens for the DSLR.  We have not seen any rain yet, but clouds have been a problem on some nights.  Also the humidity has been quite high and sometimes fog has prevented seeing very far in the distance.  Also, the seas have alternated between quite calm to quite rough, where it has been a bit iffy to walk down the aisles without almost bumping into someone.  I get worried about the tripod tipping over. 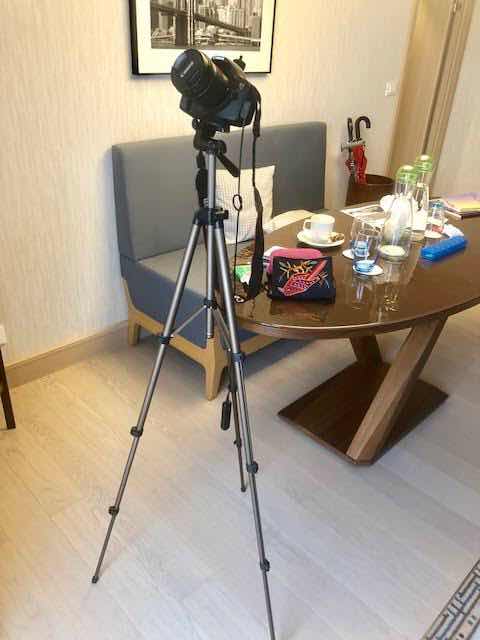 To get a sense of the wave motion, check out this photo of the upper deck swimming pool.  The sea was rough enough to cause the water to slosh back and forth.  Hmmm might not be able to do any long exposure get imaging in this condition.  It might just be that my previous Milky Way images are all I will be able to get.  The skies are dark, but ship lights are bright and ship motion complicates any long time exposures. 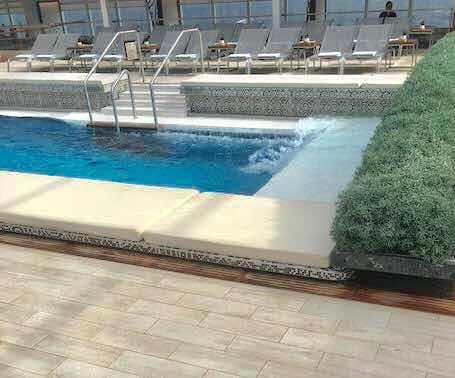 If you are interested in things astrophysical or Cosmological, check out the other posts on this blog:
www.palmiaobservatory.com