Hooray, got long exposure image of the Milky Way from our cruise ship; Comparing cruise ship brightness to the moon; Pirates and martinis

Greetings from Palmia Observatory (remote at some location in the Gulf of Aden),

Well, we had some good success last night in getting some long exposure images of the MilkyWay while on our moving cruise ship.  Before we get into that success, let’s review where we are at.

The day started off with our continuing passage through the Gulf of Aden with our next port of call in Salalah, Oman.  Check out the tracking map below:

We are still apparently traveling in international waters subject to some risk of piracy.  So when we look out the dining room window we get a bit of a glimpse of barbed wire along the side of the ship.  It strikes me as a bit strange to think that we still have piracy in this day and age, but on reflection we still have the age old crimes of theft and murder, so it seems we just have to adapt and take precautions. 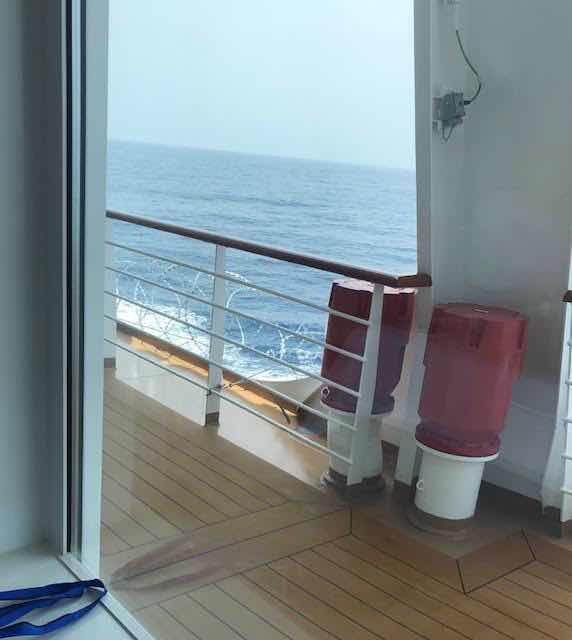 Anyway, on a happier note, we can finally report on some success on capturing some images of the Milky Way from our cruise ship when it is underway.
So, the first thing we need to know is where to look to find the Milky Way in the night sky since it is not readily visible.  The ship is moving through very dark locations without city light pollution, except for the lights from the ship itself, but we can rely on our Sky Safari Pro app to tell is where to look.  I found the app mostly kept up with our mov8ng location and showed pretty good indication of where in the night sky we could find our target.  In the screenshot below, we can see that the Milky Way runs right through the current position of Saturn, with Mars to the left side and Jupiter to the right. 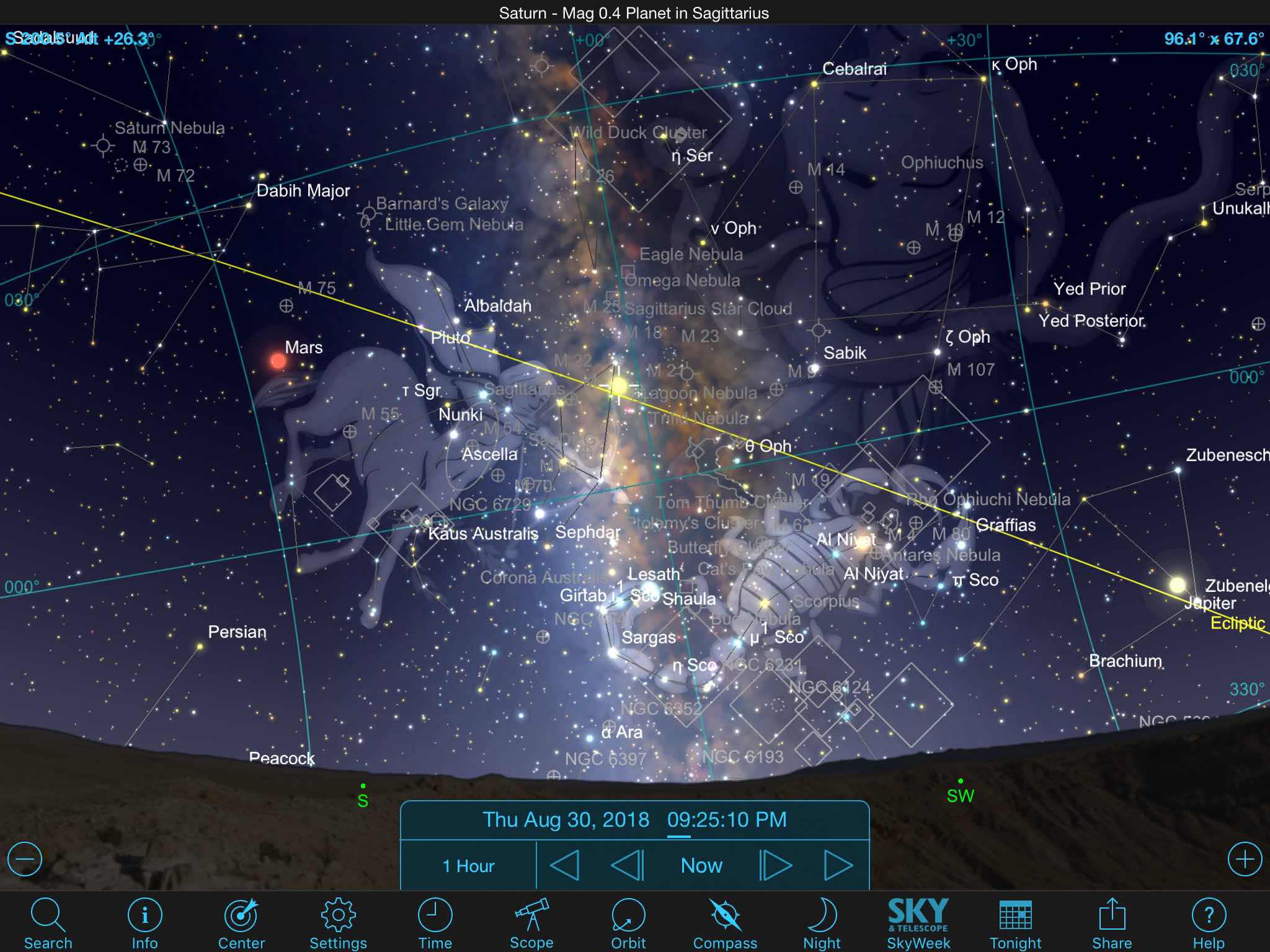 So, now I knew where to look and even though the previous night’s attempts were not successful, due to a combination of clouds and moonlight.  This night, following the recommendation of Viking’s Resident Astronomer, John Maclean, FRAS, who recommended one location on the ship that had a little better protection of direct light that could be reflected in the camera lens.  Thanks for that John!  At the same time, I’m thinking, hey, I’m a resident Astronomer too, why can’t I get a gig like this where I get paid for traveling on a cruise ship?  Ok, ok, I guess there is a little thing about being a real Astronomer, not just a physicist and Astronomer wannabe!

So here is one of the first images of the Milky Way.  This image was taken with 2minute exposure, with a DSLR 10mm, f/5.6 lens, mounted on a light weight, less than about 1 pound, non-tracking tripod.  You can see some high clouds and some star tracking, even though Mars looks pretty round. 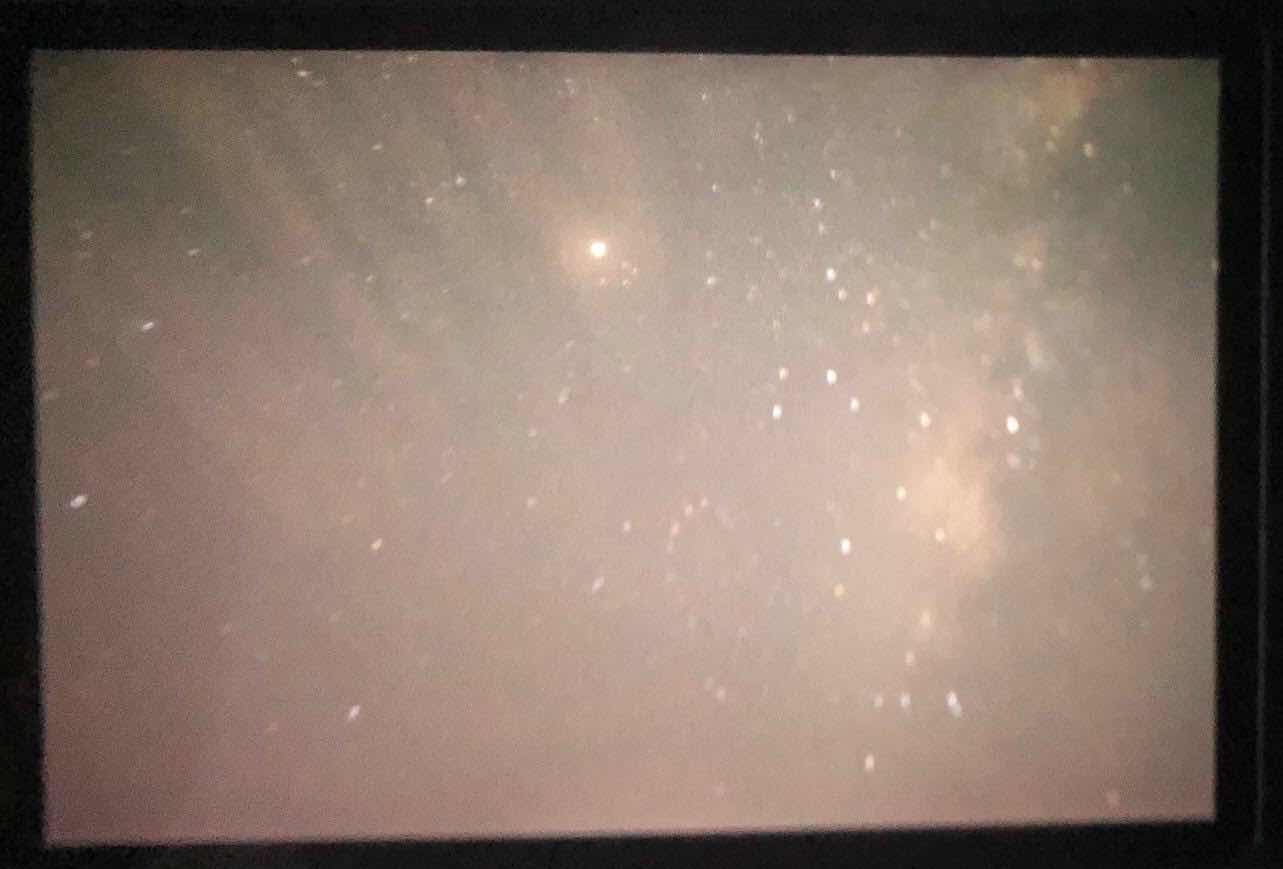 The next image was taken with the same setup, but with a slightly different position, just moved a couple of feet, to allow for better control of incom9ng light reflected off the white walls of the ship.  Note here, I found that I could use my own body, to block out one very offensive reflection.  Again, we get relatively stable image, even with all of the ship motion.  I normally don’t use the image stabilizer built into the lens, but in this case it seems to have helped reduce the effects of ships vibration. 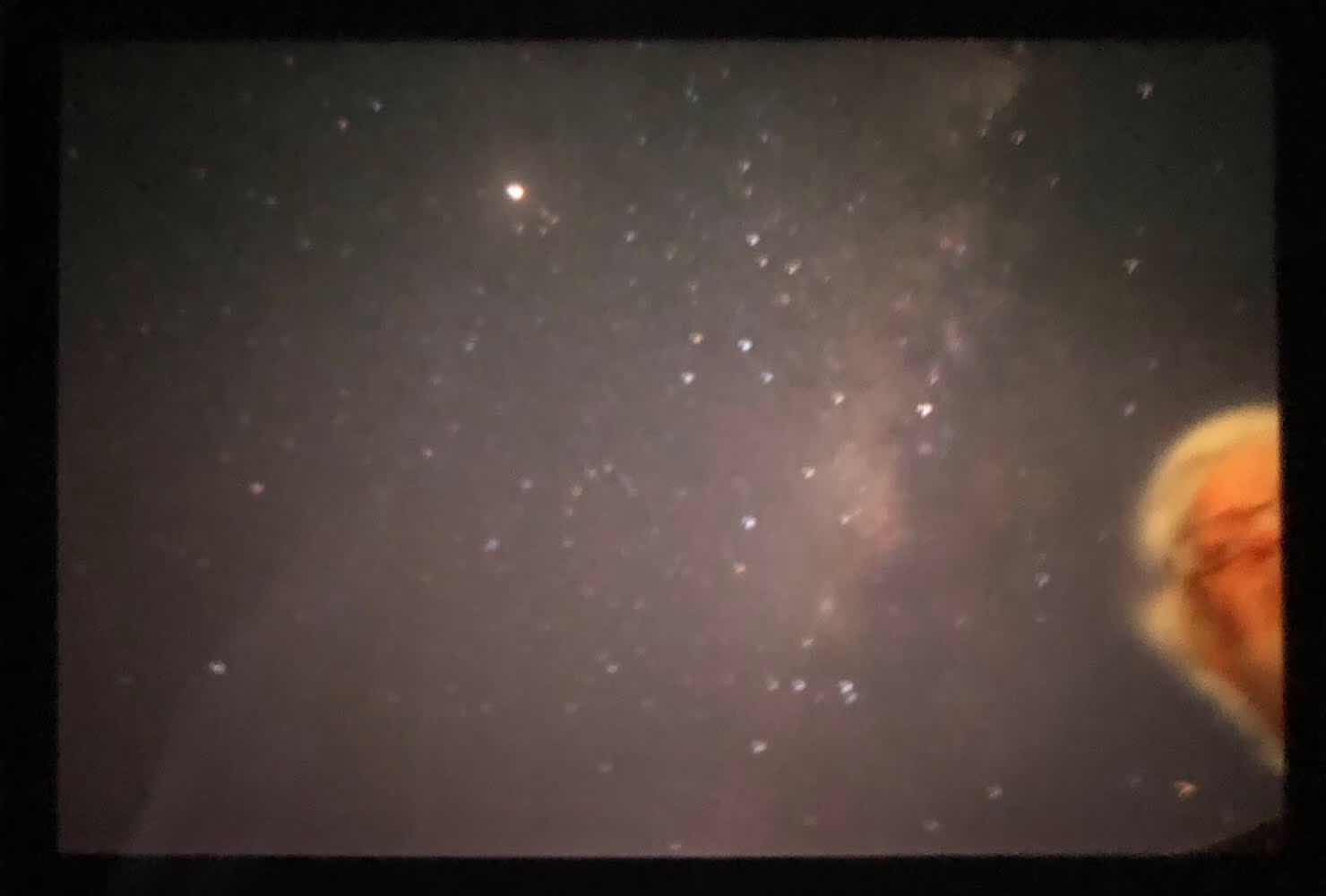 So, that was finally pretty successful.  We found that we could find a relative dark site on the ship where direct light into the lens could be avoided.  We found that we could get by with a wide angle lens and not be excessively bothered by ship vibration and ship rolling and ship motion through the water.  Maybe lens stabilization helped?  We found also that for our prediction estimate of moonlight vs. ship lights, that scattered moonlight was expected to be several hundred times brighter than the scattered ships lighting.  I hope to go more into the details of my estimate and how the light scattering from moonlight was compared to light scattering from the ship’s lighting.

By the way, I should also mention that both of these images have not yet been processed and enhanced.  Both images are just cell phone images taken of the camera LiveView screen since I didn’t bring any hardware to offload the images from the DSLR.

So, in the morning after that success, I went up to the Explorers Lounge bar on deck 7 and celebrated with great daytime views of the sea and celebrate of course with a martini!  Yep, that is my martini on the bar!  It must be 5:00 somewhere! 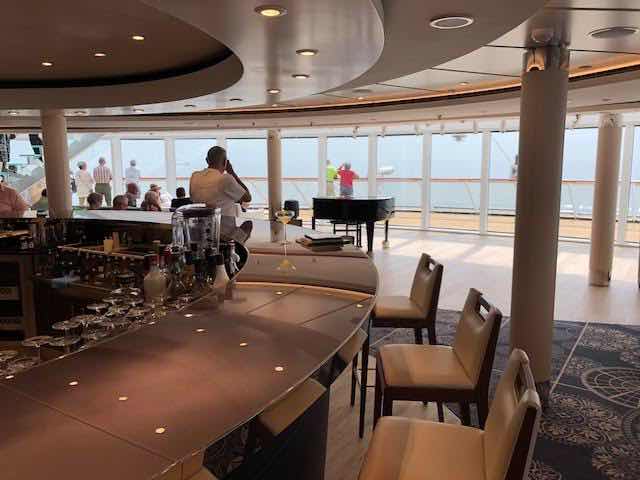 And later when I met up with Resident Astronomer Peggy at the Viking Bar on deck 1, our martinis were close at hand as our experienced waiter had no trouble navigating to our spot. 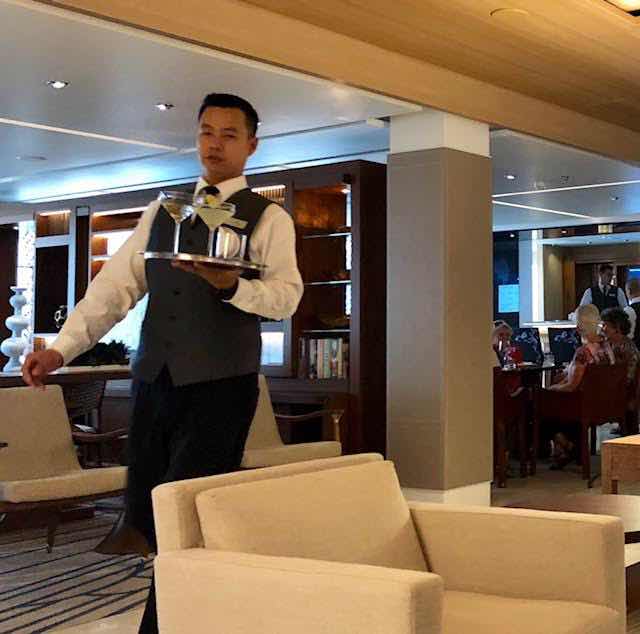 So, now we just wait as we continue on this journey and watch the ships wake as we move forward to the next port of call. 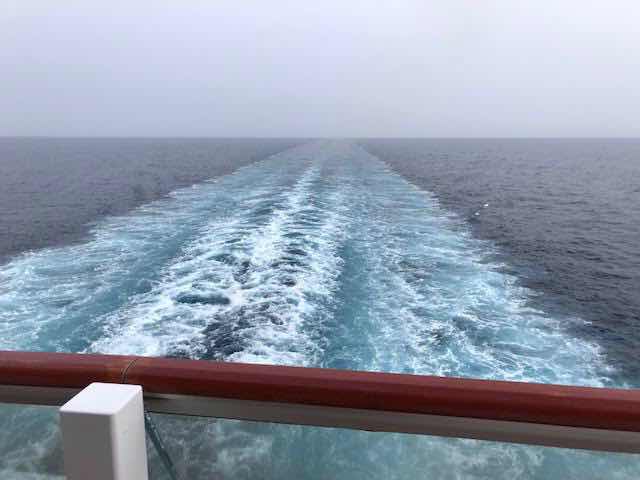 If you are interested in things astrophysical or Cosmological you can check out all the more than 200 blog posts at:
www.palmiaibservatory.com