Well, we have been busy celebrating this Christmas season and holidays and the wind is really gusting now so not much sky observing at this time.  But, there is plenty of news to report.
First up, it was time to clean up some of the mess around the observatory and the first task was to pick up all of the conference badges from travel events in 2018.  These offsite conferences were a lot of fun and informative.  It seems the 14 conferences in 2018 was about of busy travel season for me as it was when I was actually working, and this badge collection doesn't even begin to count the various seminars and colloquia, nor the cruises that Resident Astronomer Peggy and I enjoyed.  Then week after next the 2019 conference year begins with the 233rd AAS meeting in Seattle.  See all you wannabes there!


Next up in the literature we found several interesting articles.  Science Magazine presented their 2018 Breakthrough of the Year, which was in the biological sciences, where scientists now can track the development of organisms, cell by cell, and determine the sequences in which many genes are turned on and turned off during the development of the organism.

Pretty neat stuff!  One of the runner ups for this year was in the astronomical field and included the recent neutrino detection from and electromagnetic emission associated with a giant blazer.  This s claimed to be the first time that the neutrino detection was identified with a cosmic source.  When the neutrino signal was detected, an alert was sent out to other electromagnetic observatories and they were able to close in on the source and make measurements.  Again, pretty neat stuff.

Another story, this time with a photo was provided by the ALMA collaboration.  ALMA is the high resolution, 64 moveable disk radio array in Chile and they report the finding of 20 proto-planetary  disks around young stars and the surprising fact was the observation of gaps in the planetary rings.  The team was awarded and used their 65 hours of observing time to good use. These gaps are thought to be indicative of planets and these systems were much younger than previously thought possible, even around stars just 300,000 years old.


Also this week in Physics Review Letters, we found a very interesting, if speculative, paper describing a grand scheme to explain many of the unknown features of the origin and evolution of the universe.  Just as inflation, which has been a very productive theory, even though it still does not have a basic theoretical underpinning as to how it started and how it stopped, was proposed to solve some existing problems in cosmology, this CPT-Symmetric Universe proposal solves all of those problems and also explains the matter/antimatter issue as well as explaining why inflation, for which its adherents have not been able to explain how inflation inflates, is not needed.  It seems to be a pretty consistent, all encompassing conjecture that ties up a lot of loose ends in cosmological explanations.  Also it explains the big bang as the event where our known universe is just the symmetrical half of another universe unseen by us.  So, again the universe starts from nothing and evolves just as it is observed now.  Also a stable right handed neutrino becomes the cold dark matter candidate. Hmm, the paper includes some testable portions and is quite neat, so we will just have to wait and see!  Check out the original paper for more of the details. 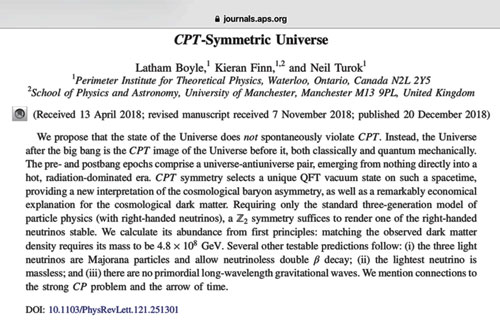 It is interesting to use this instanced to see how long it takes for papers of this kind to reach the general reading public.  The paper was sent to PRL in April 2018 and after revisions up to November, was eventually published on 20 December 2018.  It takes a while to work through the review process.  PRL is also known to have a faster review process than the regular APS journals.  At the same time, the paper was uploaded to the arXiV for general review back in April, which is really great for all of us physicist wannabes!


Another paper that came across my physicist wannabe desk is a 1999 one by David Deutsch and Patrick Hayden, "Information Flow in Entangled Quantum Systems."  I have found that as I continue learning more about quantum mechanics and actually doing the mathematical calculations that predict what will be the result of some quantum experiment that looking into how quantum computing gets done is a very useful way of learning about the calculations that we do in ordinary work.

The schematic diagram below (Figure 2 from the paper) shows the setup of generating an entangled pair of "particles", one of which is sent far away to Bob (B) and to Alice (A), at which time they choose to make their own selected measurement on just their particle.  This EPR experiment gets at the "spooky action at a distance" issue with entangled particles.

Now when the EPR thought experiment, or more modern versions of that experiment are actually carried out in the laboratory we find several key points.  First, the statistics of many particles sent to them, as measured by Alice and Bob, are found to be completely independent of what every Alice or Bob chooses to do with their particle.  So far, so good!  This is what we expect, that whatever some remote laboratory chooses to do with their particle, it should impact what we measure in our own laboratory.

The spooky part comes into the picture when Alice and Bob get together and compare their results.  It would be found that there is a strange coincidence between their collected data, none of which could be found until they actually get together and compare notes.  If they had chosen to make the exact same type of measurement on their particle, they would find that their statistics are 100% correlated.  How can this be?  If they had chosen to each do a slightly different version of their measurement, here indicated by making measurements at slightly different angles, theta and phi, then their measurement would not be 100% correlated, but some function of the difference between theta and phi, as shown in the figure below.


So, as a physicist wannabe, I can pretty much do all of these calculations myself and show that yes, indeed, the prediction is exactly as would be measured if the experiment were carried out.  So, quantum mechanics and its calculations work, we are just left with trying to understand why there still seems to be a little bit of spooky action at a distance.  Some days I wake up and think, of course, the calculations say exactly what the outcome of the experiment will be.  The next day I sometimes wake up and think, why does the world work this way?  It's a good thing that most of the conferences I go to are located close to the bar!


Ok, that is enough physics for now, it is time to party!  You can see in the photo below how Resident Astronomer Peggy and the ladies of our family get together to show off their Christmas electric light necklaces, while the rest of us wait for the turkey to come out of the smoker.  Looks light fun, but nighttime sky observers might not want to see this crowd approaching their telescopes.


We also got a couple of astronomical related gifts this year.  The photo below shows one such gift, a personalized custom plaque for the observatory.  It is really neat and includes hand painted art of the solar system and telescope and wood burned lettering.  Thanks to you, great-nephew (and maybe some help from Mom to do the wood burning), for that great work, Jack!

Another gift, of an astronomical nature, that just arrived in the mail, was this moon light globe.  The rechargeable light comes with a little controller where you can select various colors and themes.  Pretty neat.  We can watch it for hours on end.  Thanks for that OCA and Hams, Marty and Bonnie!


Even with all the gifts and celebrating, I finally gave in and decided to investigate a local mystery of a steel utility door that just seems to open, all by itself, maybe once or twice a week, primarily during the night.  What was going on with this ghostly door?  The other door was never observed to be open or to open on its own.  Was this door left open by some worker or utility person?  It just didn't seem likely to find the door ajar on Sunday morning or Christmas morning for instance.

So, when I inspected the door, the knob seemed to turn freely and the latch seemed to move in and out freely.  When I would close the door, it felt like it was rigidly and very securely closed.  So what was going on?

Inspection of the left hand door provided a very telling clue as to what might be going on.  That door knob also moved freely, but when the knob was turned to open, the door just remained in the same place waiting for you to pull the door open.  The right hand mystery door was just the opposite.  When you turned the knob to open, the door was under pressure and immediately sprung out to open all on its own.  The door had some sort of spring action that forced the door to move open once the knob was turned.  Hmm, maybe that difference between the two doors is a key clue as to why one door is susceptible to opening on its own?  I still don't have the final answer, but that one springy difference, maybe due to bent door frame or something like that, is the reason.  Maybe due to temperature changes over night, the door gets twisted just enough to free the door latch?  Or maybe it is ghosts, but I normally keep looking for natural explanations before turning to look for effects of gods, ghosts or goblins!


Speaking of ghosts, we always enjoy watching some version of "Christmas Carol" at this time of year and this time it was the version with Patrick Stewart.  Nice!  My only issue is that for some reason, every time that video comes on I have a moment or two of teary eyes.  It must be the air conditioner or something.  Right?   Anyway, speaking of spirits, the photo from some unknown Facebook page shows three spirits, which are always welcome here for a visit; well at least the lemon drop martini!


So, that is about it for this week.  There are a lot of wind gusts outside so it is time to stay inside.  Of course, just in case you are still following the on again off again launch of the Delta IV Heavy from Vandenberg, it is now scheduled for "No earlier than" December 20.  Hmm, more waiting.  At least the winds are supposed to die down by then!  Let's finish up for this end of year with a little toast to everyone in the coming year.  Yes, we know it is not New Years yet, but we like to practice and practice and practice!  Astronomer Assistants, Danny and Ruby, did not want to practice.  Probably because they don't get champagne!