Hooray, crossed the Arctic Circle; Saw, the moon through the clouds in Bodo, but no lights yet; Is Dark Energy increasing?

Well it has started to snow and our cruise ship is approaching the Arctic Circle.  Our next port of call is at Bodo, Norway, which is  above the Arctic Circle.  But check out these two images of snow on the stairs, going up to the “sun” deck and the snow around the observing telescope.  This is the first time we have been on a cruise where it snowed on us.

Anyway, we crossed the Arctic Circle about 7:30 AM this morning and I can report we experienced no ill effects; no bump as we crossed the line or anything.  Of course, it was still too dark outside to see if anything else was going on, but, hey, come on, we didn’t really expect anything anyway!

But, on the ship, crossing the Arctic Circle was a big thing for many cruisers, who participated in the “Order of the Blue Nose” ceremony.  About 50 intrepid explorers chose to jump into the jacuzzi, which as you can see was being prepped with giant bags of ice.  When the temperature was down to 1 degree above freezing, the participants jumped in, froze,, then quickly jumped out and got their nose painted blue in official recognition of their feat of courage or stupidity.  I was a little bit tempted to participate, but I chickened out.

So after we docked in Bodo, we had a chance to go off the ship and explore the city of about 50,000 inhabitants.  The sun was well on its way as we left the ship.  Check out the sunset and sunrise times for this latitude in the screenshot below.

It was cold and snowing when we got off the ship, somewhere near -1 degree Celsius.  The good news is that we saw the moon shinning through the clouds.  This was a bit encouraging in that we had hardly seen the sun in previous days.  In the image below, you can make out the moon, high in the sky, just above the bus and Resident Astronomer Peggy, all bundled up for the cold and snow.


We had just enough t8me in the darkness to drive through Bodo with some quick stops at a medieval castle, the old downtown that was not bombed during WWII and an old cathedral build in, if I recall correctly, the 1200’s.

Ok, enough of this broef travelogue, let’s get back to some Astrophysics news.  Astrophysicist Ethan Segal, bogging on “It Starts with a Bang” alerted us to a paper out on the arXiV regarding recent measurements that might indicate that the dark energy is not as constant as we had assumed and in fact might be changing and increasing.  This will be revolutionary physics if confirmed.  The paper, “Cosmological Constraints from the Hubble diagram of Quasars at High Redshift”, by G. Risalti and E. Lusso, claims a 4 sigma significant measurement of increasing dark energy, not the constant previously assumed.  You can check out all the details at arXiV/1811.02590.

Their measurement and predicted distance vs. redshift is shown in the black curve and the standard Cosmological Model, with constant dark energy density, is plotted in the dashed curve.  Hmm, not a bit difference, but as the authors say it is a 4 Sigma difference. 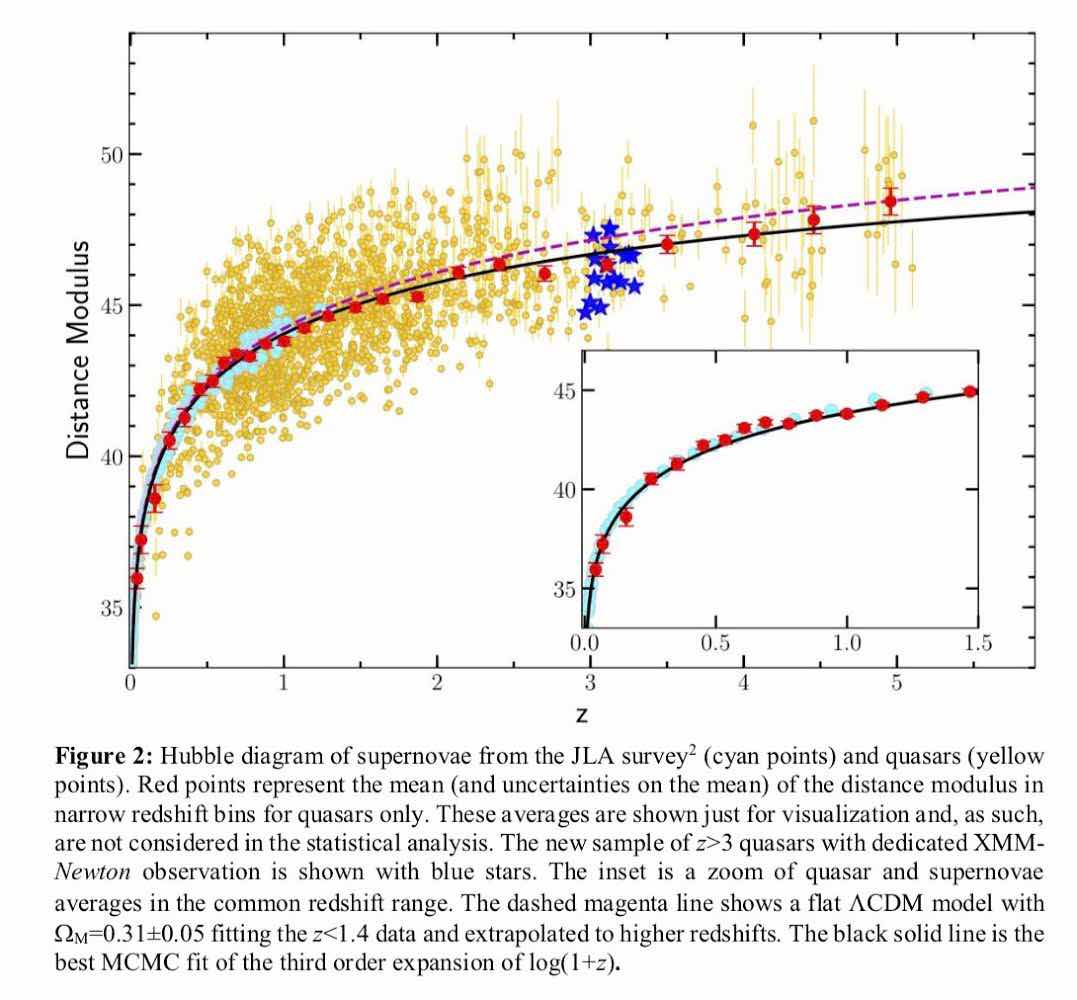 Best measurements prior to this found the dark energy being constant provided the best fit to the observations.  But as the authors point out, and this is what I found really interesting, is that the previous measurements have been carried out over a very limited range of redshift, going back to redshift 6 or so using standard candles such as supernova 1a’s.  Then there is a big gap in redshift data which is taken up at say redshift equal to about 1100, with measurements of the cosmic microwave background.  The authors say by using quasars, which can be very bright standard candles, they can start to fill in more of the gap.  They go on to say that this type of measurement might be able to explain the current tension between the Hubble constant measurement provided by SN1a and the CMB method.  Pretty neat!

An as you see in the following diagram, the assumption about dark energy density has big impact on the future evolution of the universe. 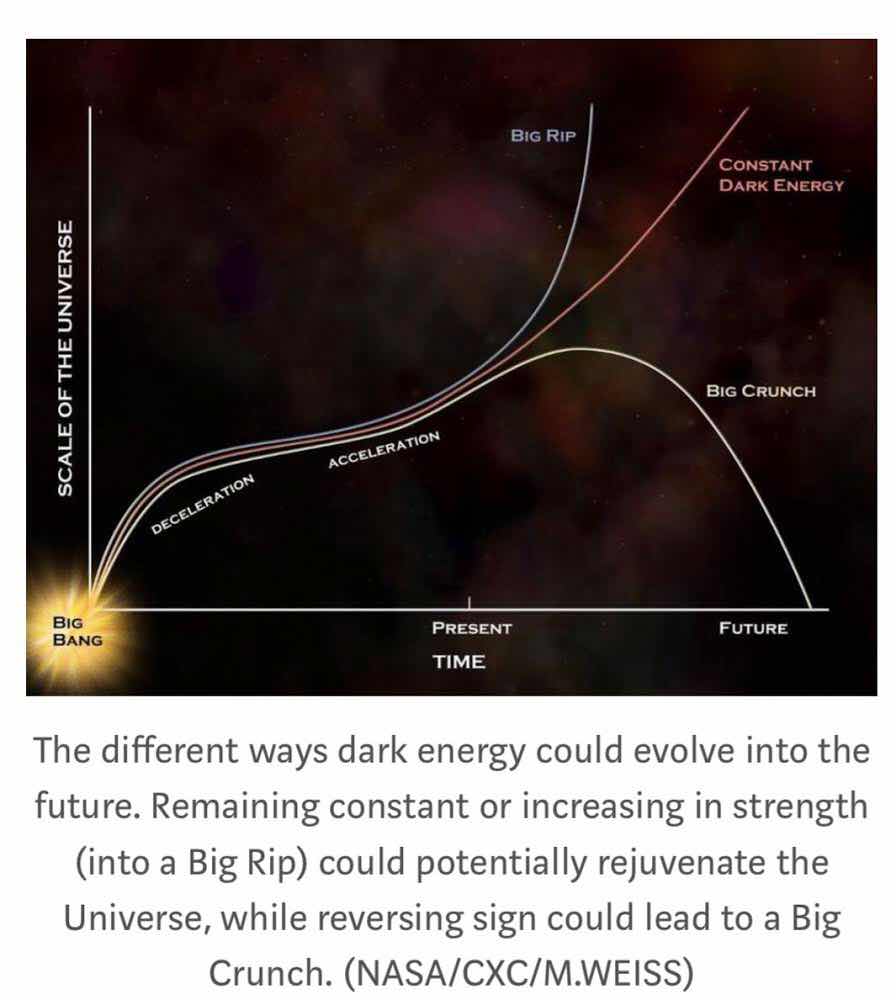 So, the paper looks interesting and the effects of the amount of dark energy are such as to cause a big rip, a Big Crunch or business as usual.  Hmmm, it’s going to be so far in the future that it is not going to personally affect us, but answering the question about the nature of dark energy is one of the major unanswered questions in astronomy.

But, we can find other opinions about the reliability of this paper by checking theTwitter feeds.  I, by chance came across the following exchange, from someone who says they don’t know anything about physics, but are worried by the report, and for someone, like Sean Carroll, who knows something about physics.  Hmm, I’m not going to get involved in Sean’s 1% prediction, but it is interesting. 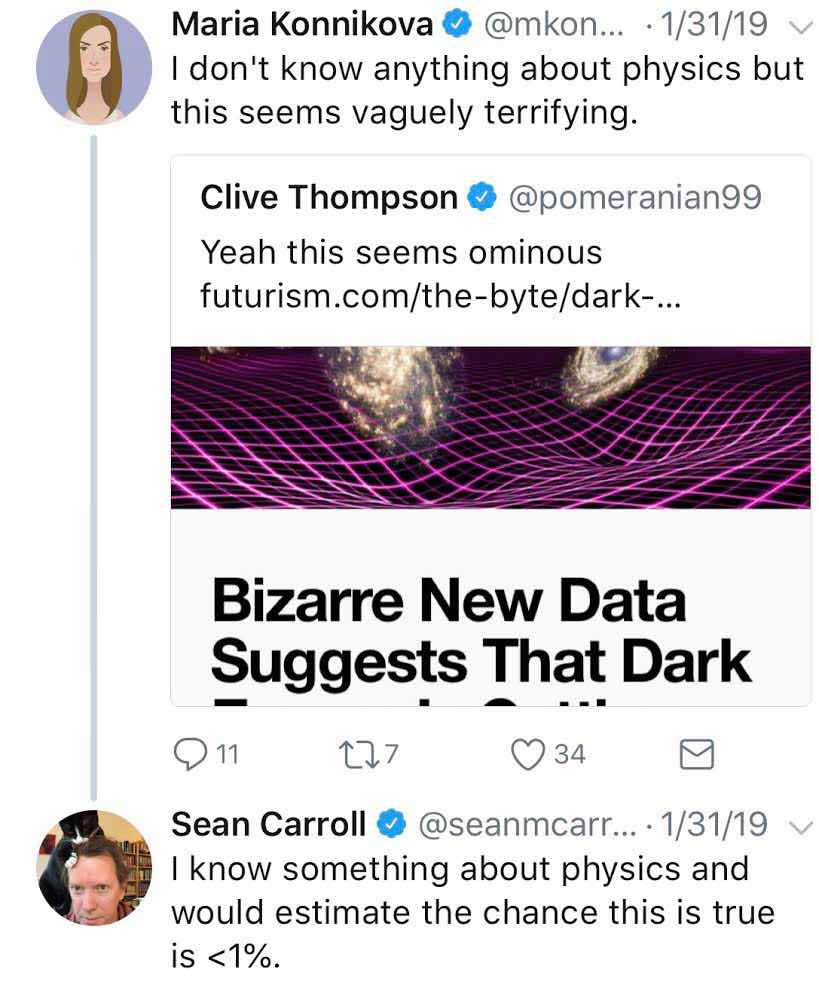 Ok, so I guess we just have to wait. I'm still trying to edit these posts with just my IPad and hopefully all the sentences and most of the spelling holds together.  In the meantime, we continue moving further up the coast, hoping for clearer skies.