Snowman in Norway and frost in Orange County; Books on Northern Lights and Gamma Ray Bursts; Measuring the neutron star radius with NICER

Well we are back in Orange County and find that the cold weather, minus the snow has arrived here too and been here too.  So we will have some final comments about the cruise searching for the northern lights and then, because it is so cold outside, just report on some of the latest books and journal articles.
First though we have a final photo from off the coast of Norway where our ship, Viking Sky, went through the snowing weather.  The deck crew cleaned up the deck and piled up some of the snow and made a snowman for the amusement of all the passengers.  Here the Resident Astronomer inspects and greets the snowman.  We don't normally associate being on a cruise with snow!


Now back in Orange County, there is no snow, except in the nearby mountains, but the weather is so cold that we now find frost, not just on the grass in the morning, but also on the rooftops.  We noticed this frost while out walking the grounds with Astronomer Assistants, Danny and Ruby.  The frost was quite unusual in that the frost is normally found closer to the ground, but here it is on the roof.  The roof can cool down by radiative cooling, just like the ground does, but the cold air layer must have been much thicker for condensation to form on the roof.  There must have been a lot of cold air and probably some ground haze affecting visibility, but this was not observed in that the sky appeared quite clear.  Once again we find that the astronomer wannabe has many opportunities to study meteorology!

Ok, its cold outside, so let's review some books that have arrived and a magazine article.  Even though we were not successful in seeing the northern lights, we did pick up a book on the northern lights at the Alta Museum in Alta, Norway.  This book by Pal Brekke is a neat little book of about 160 pages and includes in addition to some great photos of the lights, but also some of the history of exploration and scientific examination, of Kristian Birkeland and other scientists, and of the myths and legends of the Sami and other native people.  It is not particularly technical, but tells a great story of how and why the lights form and how they were interpreted and experienced by those who saw them.

Another book that finally showed up on our doorstep from our friends at Amazon is the 2019 first edition of the book, "The Physics of Gamma-Ray Bursts" by Bing Zhang.  I saw a pre-release version of this book at the winter AAS meeting in Seattle and was impressed by the wide range of physics principles that can go on to produce gamma ray bursts.  The common understanding is that the bursts are caused by matter infalling onto a black hole, but the details of what goes on is still under review.  This book looks to be quite complete and up to date.


The scope of the book covers the impact of all four known forces and the observational signatures caused as matter falls into a black hole and the accretion disk.   The infall results in such energetic reactions that weak nuclear forces produce neutrinos.  The energies involved allow strong nuclear force reactions and the signatures that they create.  Electromagnetic forces and  interaction results in a wide spectrum of photon production, including of course the gamma rays at the high end of the spectrum.  Finally, the infall of gas and dust can result in generation of gravity waves, so examining GRBs is a truly multi-messenger endeavor.  The book covers these processes and how each of them affects what can be observed and will probably require the astrophysicist wannabe doing a deeper study of those processes.


Finally the March 2019 issue of Scientific American had a great article "The Inner Lives of Neutron Stars."  While most of us just think of a neutron star as just a big ball of neutrons, the reality is that there is much of the internal structure of the star is still a mystery.  The article talks about two main hypotheses: Superfluid core hypothesis and the weird quark hypothesis.

How to tell which of these two, or an alternate explanation, is the better description?  Determining the radius of the star is the best measurement because the two hypotheses predict different radii for the same mass star.


But how do you measure the diameter of a neutron star?  This was the point we had to consult some other physics processes.  We know, as mentioned in our blog post of June 11, 2016, that an interferometric technique, like the one initially developed by Hanbury Brown and Twiss, could make stellar diameter measurements.  But the  neutron star is so small, maybe 20 km in diameter, which is about 70,000 times smaller than a star like our sun and they are located much further away from Earth than is the typical star.

Well it seems that it is possible o make measurements of the rotation rate and effects of the hot spot on neutron stars and from this measurement the diameter of the star can be estimated.  This type of measurement is being done with the Neutron Star Interior Composition ExploreR (NICER).  NICER was launched in 2017 aboard a SpaceX Falcon 9 rocket and is now installed aboard the International Space Station (ISS).

The X-ray photons from a point source like a neutron star enter the NICER through 56 X-ray concentrators (XRC),where they are then focused with Focal Plane Modules (FPM) and strike a silicon detector there.  NICER also requires Tuned Mass Dampers (TMD) to compensate for vibrations of the ISS.  Remember that the ISS has people moving around and working there and these and other vibrations would cause NICER to move slightly and produce a fuzzy image of the neutron stars.  I guess if they start having sex on the ISS they might need more TMDs or change their work schedule! 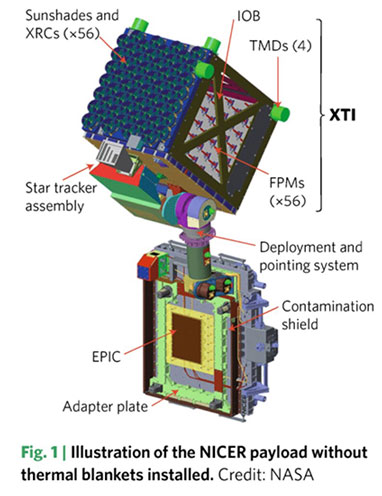 The illustration below shows how the NICER is mounted on the ISS.  It already looks pretty crowed up there.

So how does NICER determine the radius of neutron stars by collecting X-rays photons from the star?  The following NASA slide gives a big picture view of how studying the lightcurve from neutron stars can be used to set limits on the radius of the star.

The X-ray lightcurve is generated by the hot spot at the star's surface.  The hot spot is associated with the star's strong magnetic pole and as the whole star rotates, the hot spot can beam more or less energy towards us at very high rotation rates, say 1000 times per second.  Then by what seems to be very complicated physics, the light curve is modulated by gravitational effects and this distortion can be analyzed and the mass to radius measurement of the star can be done.  I don't quite see how all of this works and it will take some more study to work through what is going on.  At least we get a sense as to how the radius measurement can be done on such a small object, located at large distances from us.