Well, here we are in day 2 and 3 of our Chilean adventure as we tour parts of the country as we wait for the eclipse on July 2.  We can report on some of our adventures, but first the cloudy sky with barely visible sun in Santiago has us a bit worried.

You can just barely see the sun poking through the clouds (just above the palm tree).  Luckily our tour guides say that the projected weather for our eclipse viewing site near La Serena is for clear cloudless skies.  Great!

Santiago is the largest city in Chile with something like 7 million inhabitants.  The architecture of many downtown buildings shows the influence of Greek and Roman and indigenous building styles.  Chile is surrounded by many volcanoes and active seismic faults.  Building on the ruins of ancient Mapuche foundations often results in good earthquake and seismic designs. 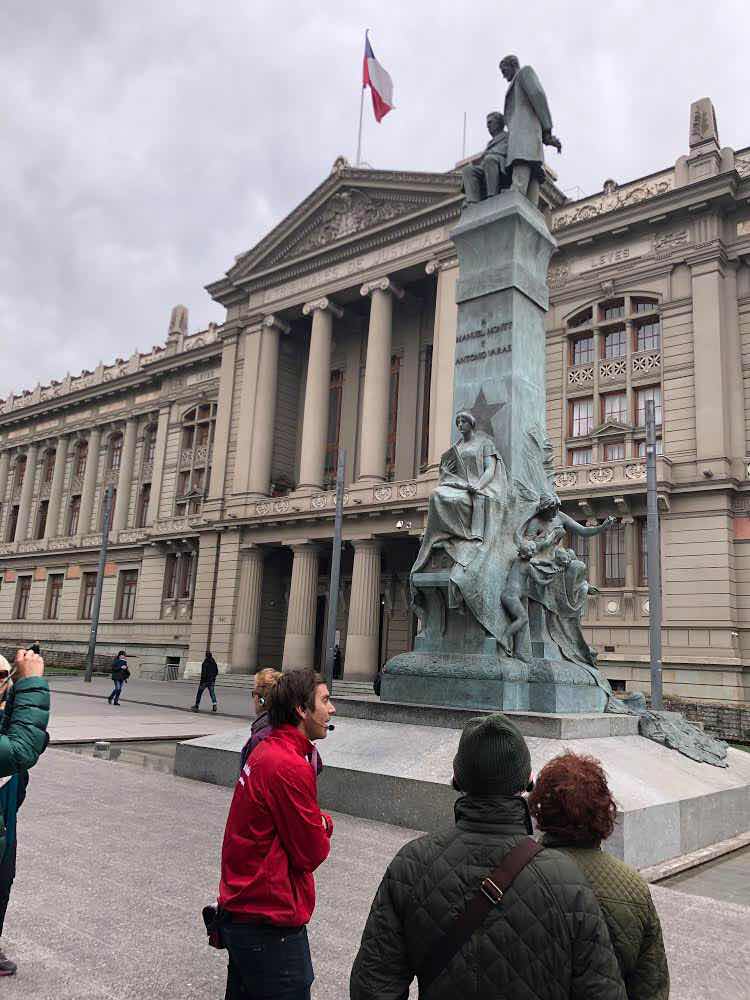 We saymany memorials to previous political futures in Chilean history.  Here is a statue to Salvador Allende who was rhe Chilean president until his overthrow by the coup by dictator Pinochet.  There is too much of political history to be covered in this blog, but if you want you should follow up on a lot of the interesting history and details. 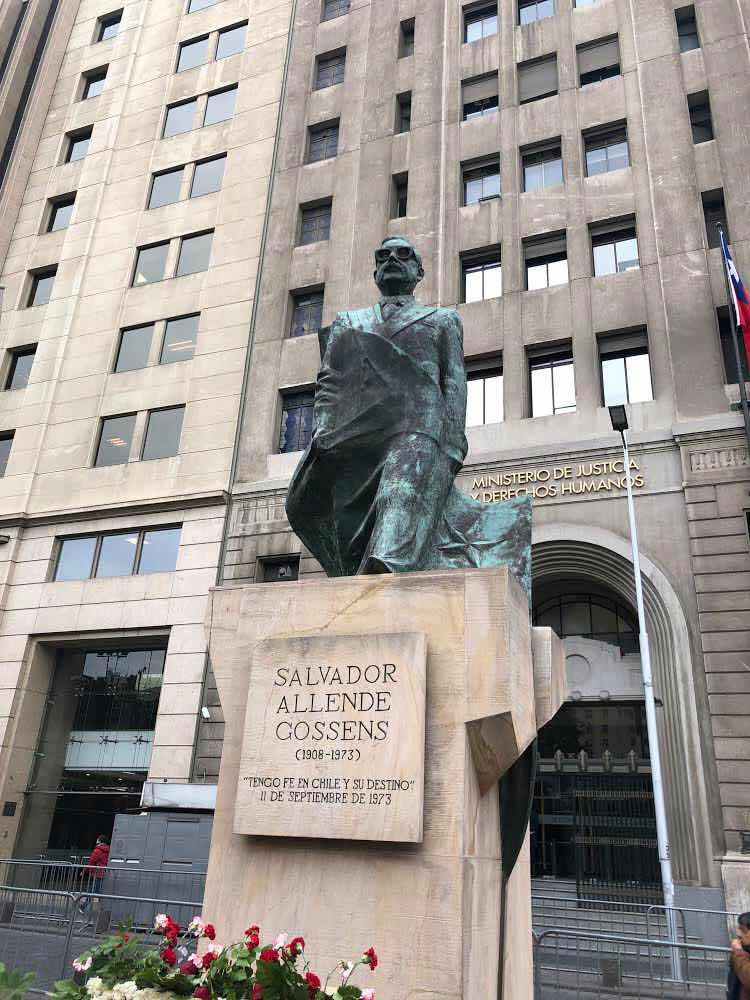 Of course, the influence of the Catholic Church cannot be ignored as it was introduced or imposed by the invading Spanish conquistadors.  This statue of the white virgin is atop a hill that we reached by riding up the gondola cable car.  We then took the finicula ride down to the bottom of the hill and then walked back to the hotel. 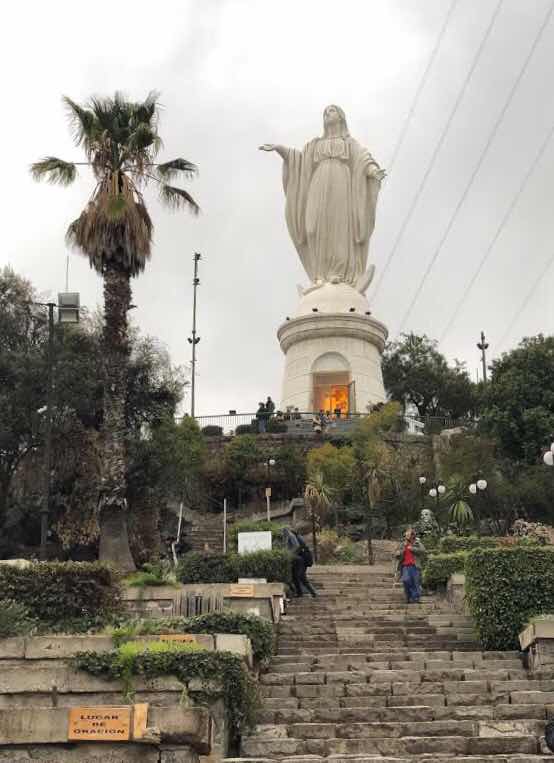 The view of surrounding downtown Santiago was fantastic.  Here you see Resident Astronomers with the Andes in the background and downtown Santiago, with the tallest build8ng in Sur America shown at the far right.

Our solar eclipse tour was arranged by “A Classic Tours Collection”, who included many specific eclipse oriented speakers and tours.  We were fortunate enough to have eclipse expert, Professor Jay Pasachoff, as keynote speaker during on of our included dinners.  When we first signed up for this tour, the Classic Tours travel agency was a complete unknowmro me and I was reluctant to plunk down thousands of dollars with a company just found on the Internet.  But all of the other eclipse tours were already sold out, even as we started to plan for this event over a year ago.  But, I recognized a photo of Professor Pasachoff on the company website and when I bumped into him at an astronomy confenrce and he confirmed that he had been on many successful tours with the company, it was only thenthat we decided to go ahead and put the rest of the money down.  Wow, and so far everything has been fantastic.  Thanks for everything Mark!

And it just keeps getting better and better.  The next day we headed off for a tour of the nearby major port city of Valparaiso.  Along that route we stopped for a tour of the Valmonte Winery, where we had a great tour and sampled some great wines, and as you see I even  brought a bottle back to the hotel.

We arrived in Valpairiso and had a great seafood lunch at a restaurant right on the harbor.  After which during a stroll around the town, we encountered many marching parades,  below you can see some of the participants along the parade route.  Apparently the furry “monster” represents something like the devil, but as our tour guide explained it was not in the old binary, dualistic approach to good and evil as portrayed in Western thought, but really showed evil as just part of nature.  This perspective provided by the indigenous Mapuche people was very interesting and I am growing more receptive to this non-dualist interpretation of nature. 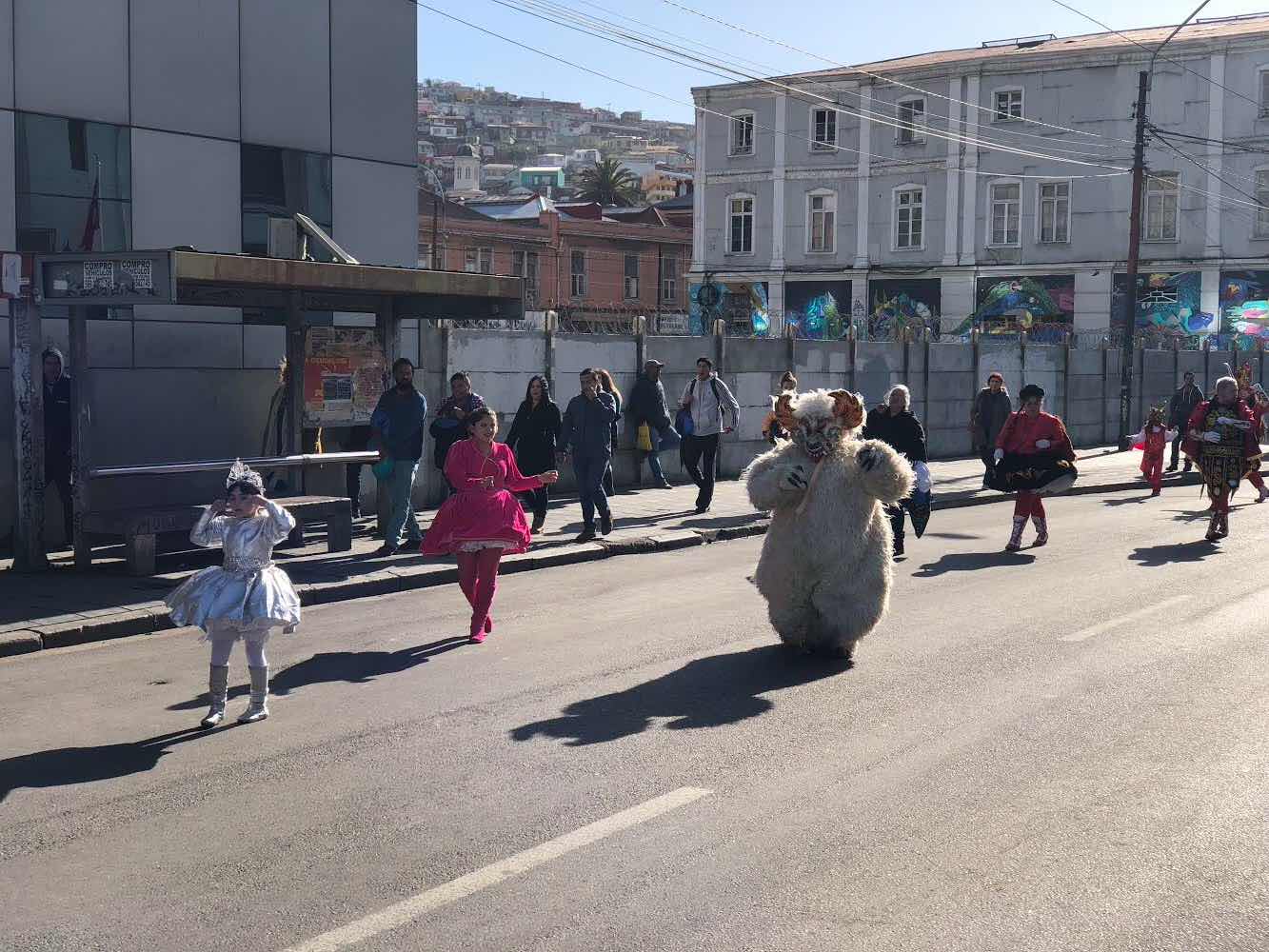 Finally on the way back to our hotel in Santiago, we had a chance for a photo stop showing the Valparaíso harbor and cityscape view.  Beautiful!

If you like things astronomical or Cosmological, then check out mor blog postings at: www.palmiaobservatory.com
Posted by Palmia Observatory at 4:09:00 AM