Fuming volcano and Tatio hot springs and geysers in the Atacama; Desert Fox; Valley of the Moon and Salt Flats; Flying to Easter Island

Well our adventure in the Atacama continues.  This time up at up to 14,000 feet elevation at the Tatio geysers and hot springs.  Along the way we see the volcano, Putana, maybe not active, but certainly out gassing.  Not much to report on astronomical events, but exploring the desert was a lot of fun.

Here is one of our views of volcano Putana.

As we got closer to the Tatio hot springs the steam vapor blocked out the sun.  There are dozens of steaming fumaroles and hot boiling and gurgling spots all around us.

Here you see some of our tour group walking between some of the active areas.  The safe paths are marked off by stones.  Our guide told us stories folks who strayed off the path and fell through the crust and were seriously burned.  Hmm, it seems that kept all of us cats in line! 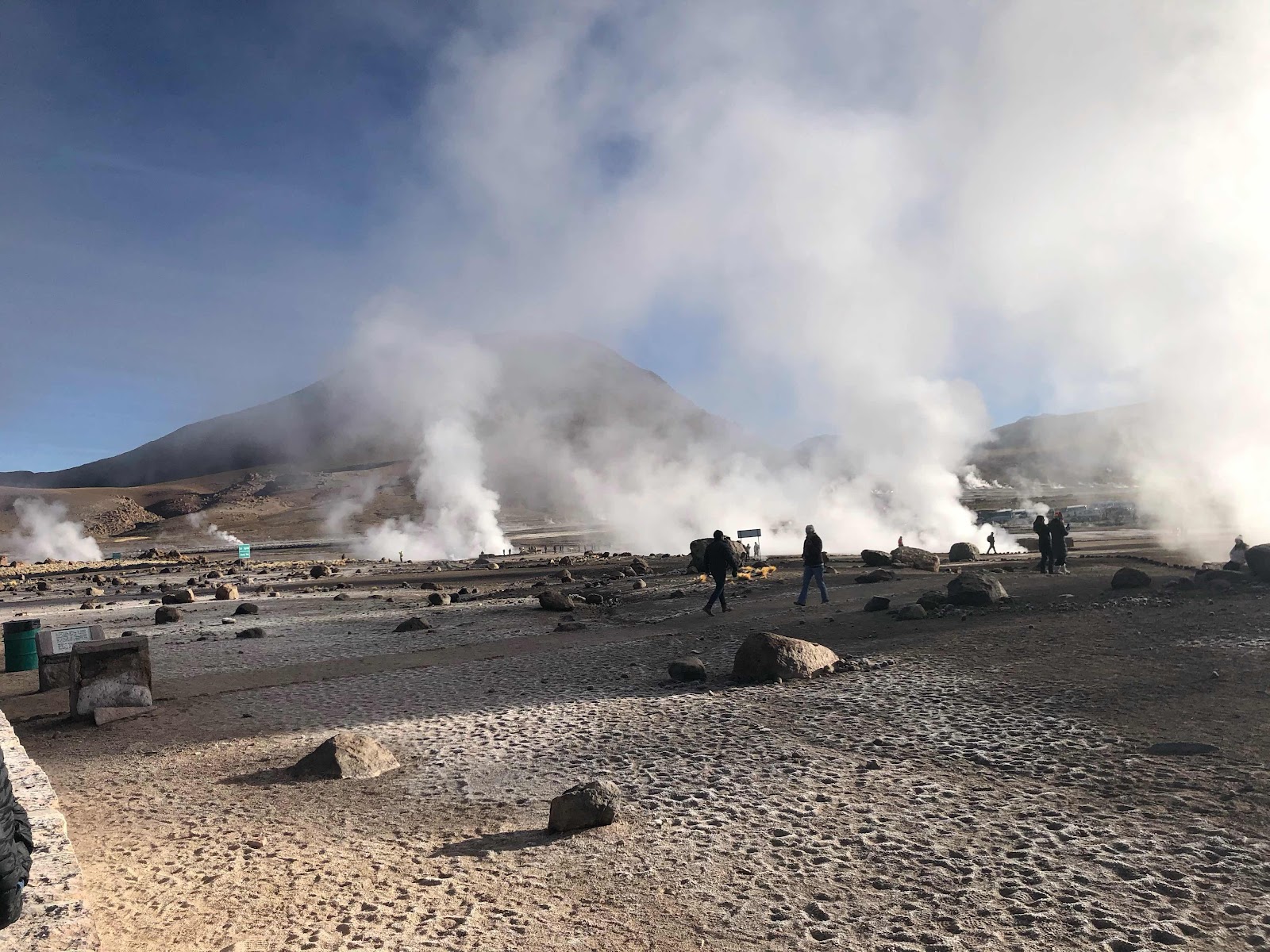 There were many active caverns where you could here and see the boiling water come gurgling and bubbling out. 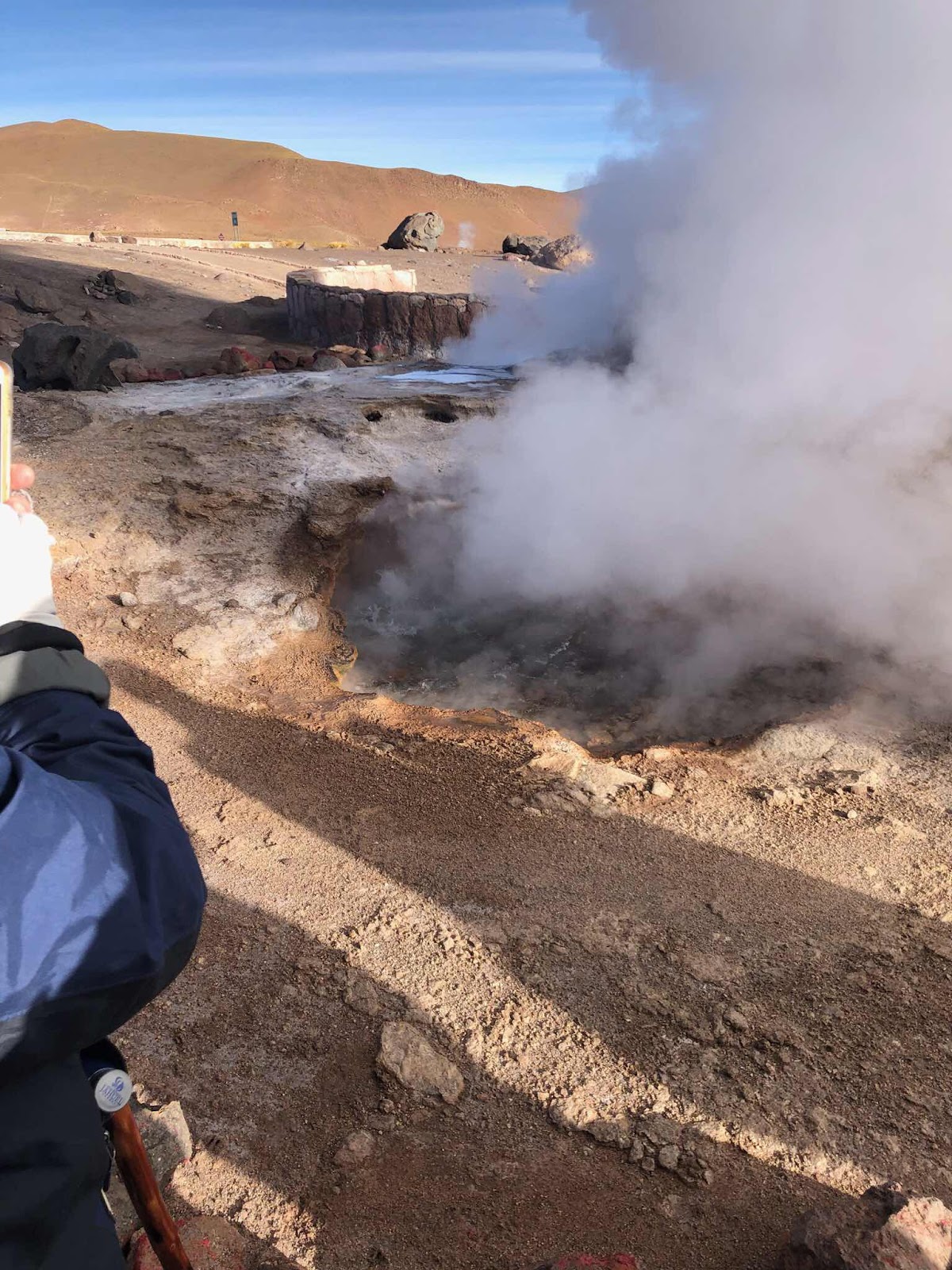 A hot springs type spa is also there and maybe a couple of brave souls of our tour group elected to try the waters.  Nope, not me or Resident Astronomer Peggy chose to go from freezing to boiling.  It looked like fun but not for us!

Having worked on several geothermal investigation projects in my past life, I enjoyed being surrounded by steam clouds and wondering what the potential for geothermal power production might be?  Not all sources of steam visible at the surface can be used economically..  I had built some instrumentation that we would take out into a potential geothermal field and wewould measure the quality of the steam produced by the test well.  The quality of the steam is a measure of how much is actually steam and how much is entrained liquid water and if the quality is not high enough it means the geothermal well can not be used to produce economical electrical power.  The wells that I went to in New Mexico and the Salton Sea proved to not high enough quality to be used for power production.  Yep, just because you see lots of steam at the surface does not mean it will work out.

Even at the hot springs, we saw evidence of life.  Birds were there and we saw a fox dart in and out around all the visitors.  We learned that it used to be that people would feed the foxes and they became dependent on tourists for food; having given up their hunting skills for the easy life.  When the foxes don’t hunt the whole downstream ecosystem is affected and the natural checks and balances are altered with not good consequences.  Now the rule is not to feed the foxes.

The natural beauty around the hot springs is amazing.  Here we see a combination of flowing water, ice and snow and steaming vents in the background. So, at 14,000+ feet, the dry Atacama is a fun and interesting surprise. 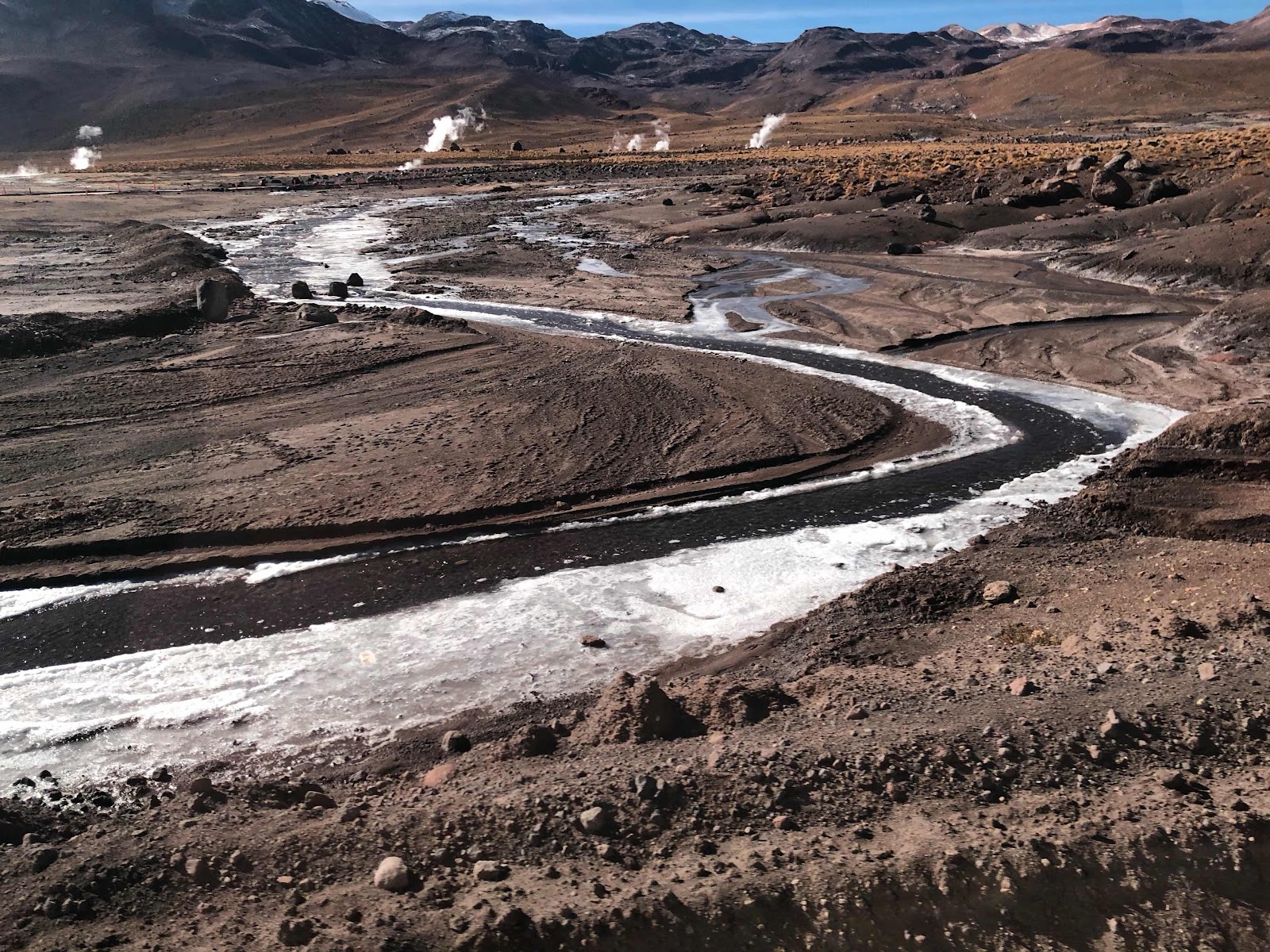 After visiting the hot springs we drove down to the Atacama salt flats and the Valle de la Luna.  Now this part of the Atacama was more what I had grown up to believe that was representative of a desert. 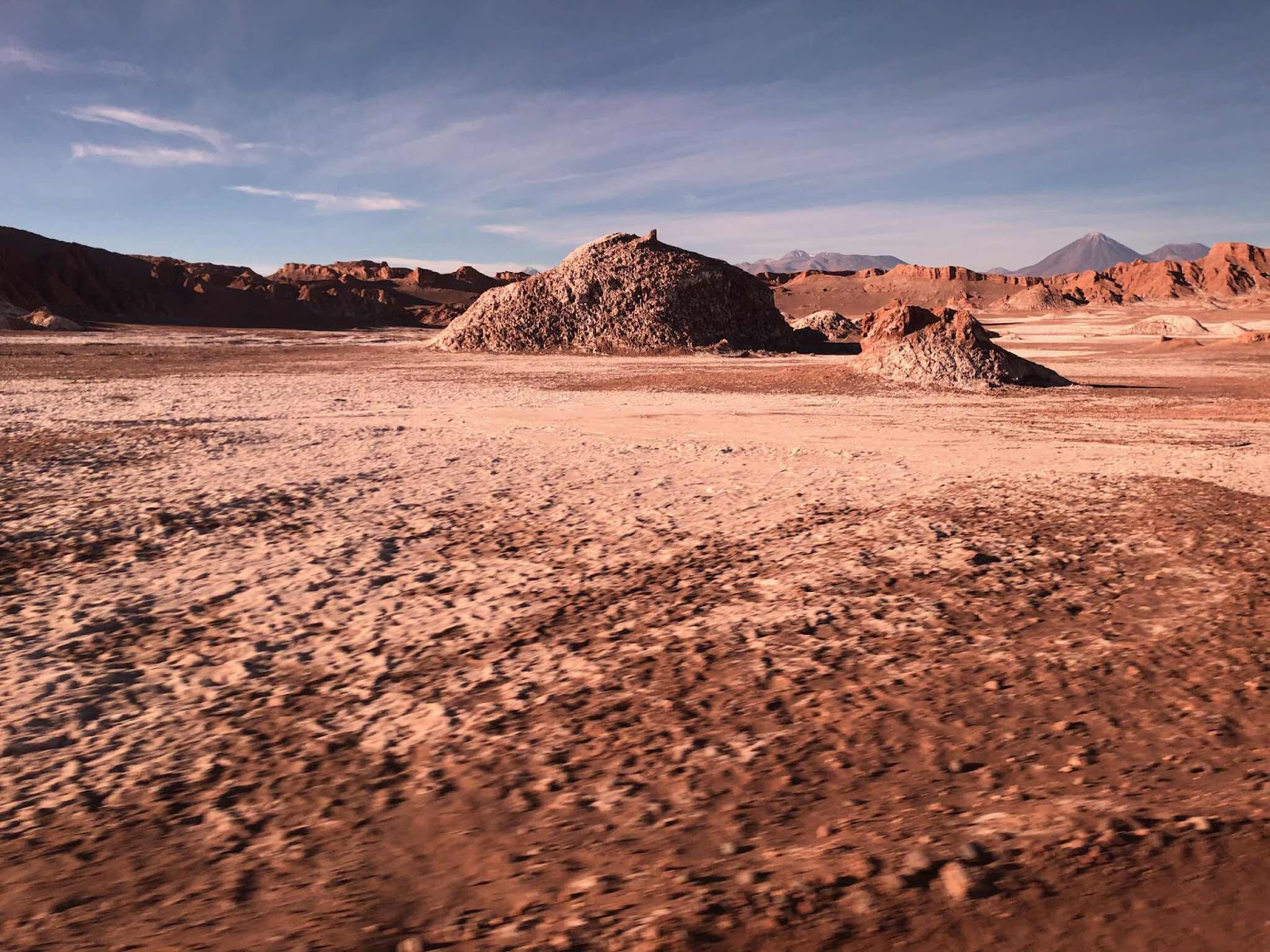 The wind causes a lot of erosion of surface features and when the occasional rain comes in the winter it becomes even wors.  In the photo below, Resident Astronomer Peggy stands in front of some weathered mounds called “The Three Maria’s”

The exposed layering of rock shows the geological history of the area.  Mich of the layering is due to salt evaporite in between other layers.  You can see in this photo a history of differ t amounts of evaporite deposits and some bent and broken sections showing disconformity.

Our tour through the,Atacama came to an end at sunset where the tour operators provided a sunset view of the surrounding mountains and we enjoyed cheers, wine and snacks and of course, several glasses of the Chilean natioanl drink, the Pisco Sour.  Thanks for the party, Classic Tours Collection!

Ok, that portion of our eclipse tour and tour of the Atacama has come to an end.  Now it is time for the final portion of the adventure and that is to visit Easter Island, Isla de Pascua.  So, we elected to splurge and upgrade our 5.5 hour flight to Easter Island and sit in business class.  Nice!  It is much less stressful than sitting and coach and we get to have some OJ while waiting for our champagne! 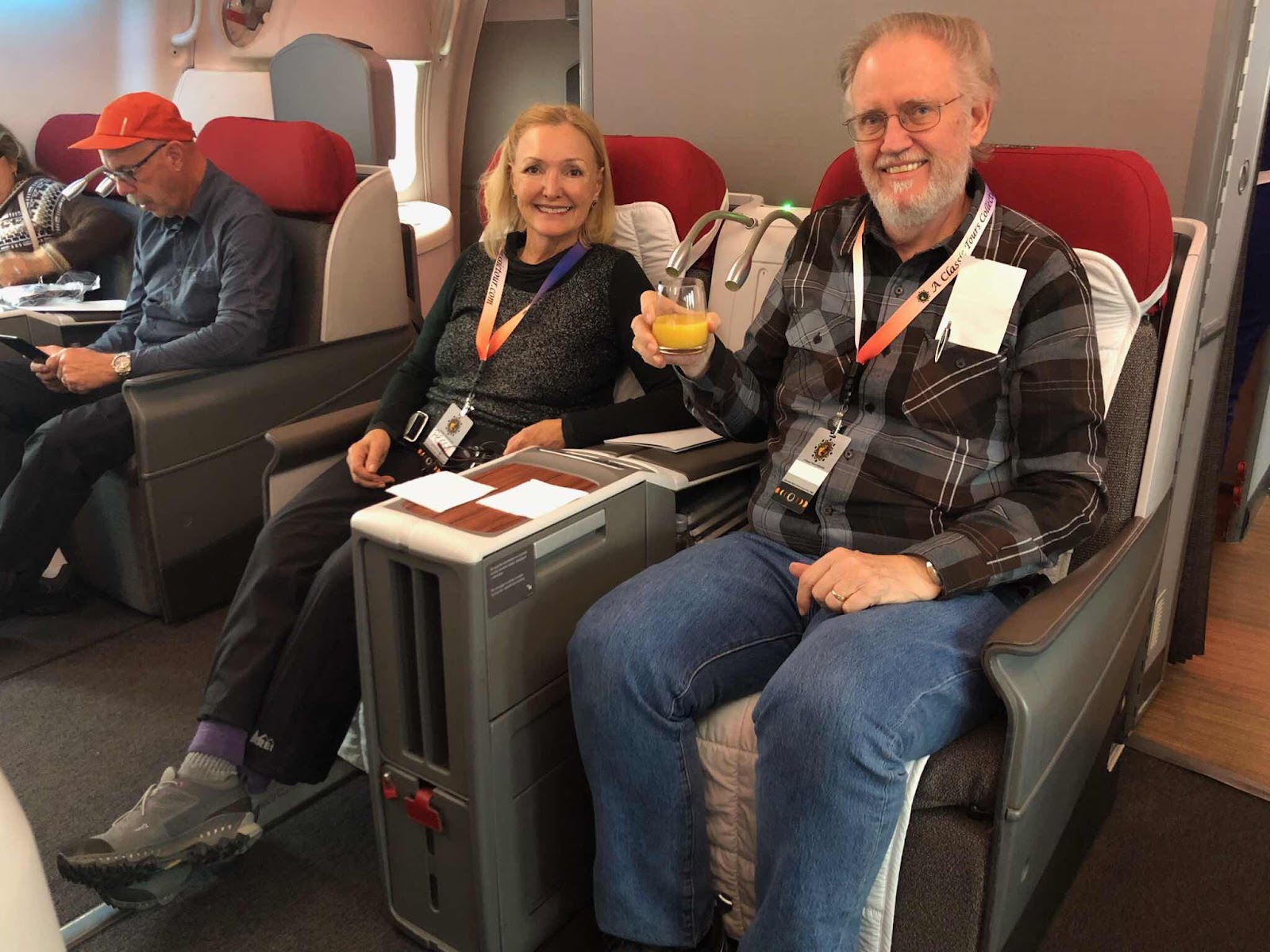