Well, here we are on our final leg of our Chilean adventure, during which we first saw the 2019 total solar eclipse and the toured the Atacama desert and now on the last portion of the trip,with a short visit on Easter Island (Rapa Nui) and finally some success with imaging the dwarf galaxies, SMC and LMC.

Spiending a few days on Rapa Nui, which I will now refer to by name rather than the common name of Easter Island, has been a mind expanding event.  First, after hearing of the native  people who inhabited the Island, at the time of its discovery by Dutch sailors in 1722, and how they were enslaved and  mirdered by these outsiders and forced to abandon their culture and adopt Spanish as their language and accept the Catholic religion, it seems only right to adopt their name of the island.

Rapa Nui, now a part of Chile,  is a 5.5 hour flight off the coast of Chile and even though it is 39 degrees further west than Chile, the convention is that it is 4 hours behind GMT (I probably should refer to time in referene to UTC, but it is just an old habit to refer to GMT).  It is almost the most remote location on Earth, with its closest neighbor being Pitcairn Island, of Mutiny on the Bounty fame, more than 3.5 airplane hours further to the west.  It has mostly volcanic in origin and occupies 63 square miles of land surface.  It now appears as a lush and green tropical paradise, not like the impression I had as a youth where I learned or assumed it to be barren of all trees.  True, in its history there was a lot of infighting among the native tribes and great destruction of the native trees,  but now there are many trees (which often got in the way of my astronomical observations).

We had a chance to drive tovarius locations around the island.  This photo shows one of the volcanic calderas.  Volcanic ash, compacted and naturally hardened, is the primary material from which the stone sculptures, the moai, are carved.

It seems that no matter where we went in Chile or now on the island of Rapa Nui, there were always hundreds of stray, yet friendly, dogs.  Here you see one that waited at the restaurant door for someone to notice their friendly nature and hopeful looks for a treat.  Resident Astronomer Peggy, thinking of her own Astronomer Assistants, Danny and Ruby, always saved a treat from our meal for them.

When we were in the Atacama we saw many foxes and Vicuna and here on Rapa Nui we ran into many dogs of course, but also many horses, some cattle and in this case at one of our restaurant stops, a giant turtle in the boat dock.  The turtle apparently stays around the boat dock because the fishermen always feed him (her).

As we continued our way around the small island, during a lite rain, we saw rainbows and a ring around the sun, Nicholas is caused by light diffraction in the raindrops  This image comes straight from the iPhone.

We always tried to have dinner or a bar stop close to dusk and sunset.  Here is the IPhone view from the La Kaleta Restaurant on Rapa Nui.  We enjoyed a great dinner and a few Pisco Sours and the  Brazillion national sweet and sour lime drink called a Caiparinha and watched the surf roll in and the sunset. Umm, umm, good!

Of course, our tour had many stops around the island of a Rapa Nui to check out the sone statues, the Moi, which are everywhere.  I don’t recall the actually number of Moai’s but it is something like over 800 in total, with many of them fallen and mostly covered by soil or still in the quarry, not completely freed and carved from the volcanic stone.  Here Resident Astronomer Peggy and I pause for a photo near the quarry, which is on the side of a large volcanic ash fall that has hardened and forms the Moai quarry.

We need to show at least one close up view of one of the stone Moai.  The early tribes on Rapa Nui carved about 800 of these statues from hardened volcanic ash or volcanic tuff.  The material is quite soft and easily damaged by weathering from wind and rain and even rubbing against other rocks.  The carvers used harder material, such as volcanic basalt, which is actually formed from molten lava, to hand carve these multi-ton, 10-20 meter tall sculptures.

Here we see OCA Scott and Sandy examining the quarry where partially carved Moai are seen.  Apparently the Moai were carved in both the horizontal and vertical positions, but always moved down the slope of the volcanic quarry in the vertical position.  As more and more statues were carved, the carvers moved higher up the volcanic slope and used the clippings from previous carvings to assist in being the finished Moai out into the open and down the slope.  Pretty neat!  So even though there is still uncertainty how the islanders moved the statues down the slope to many miles away, it probably didn’t require the need for alien technology!

Well, it is winter here in the Southern Hemisphere, but that didn’t sop the locals, and I suppose some tourists, not us though, to go for a swim at the beach.  Nope, not us;  it was just too cold! 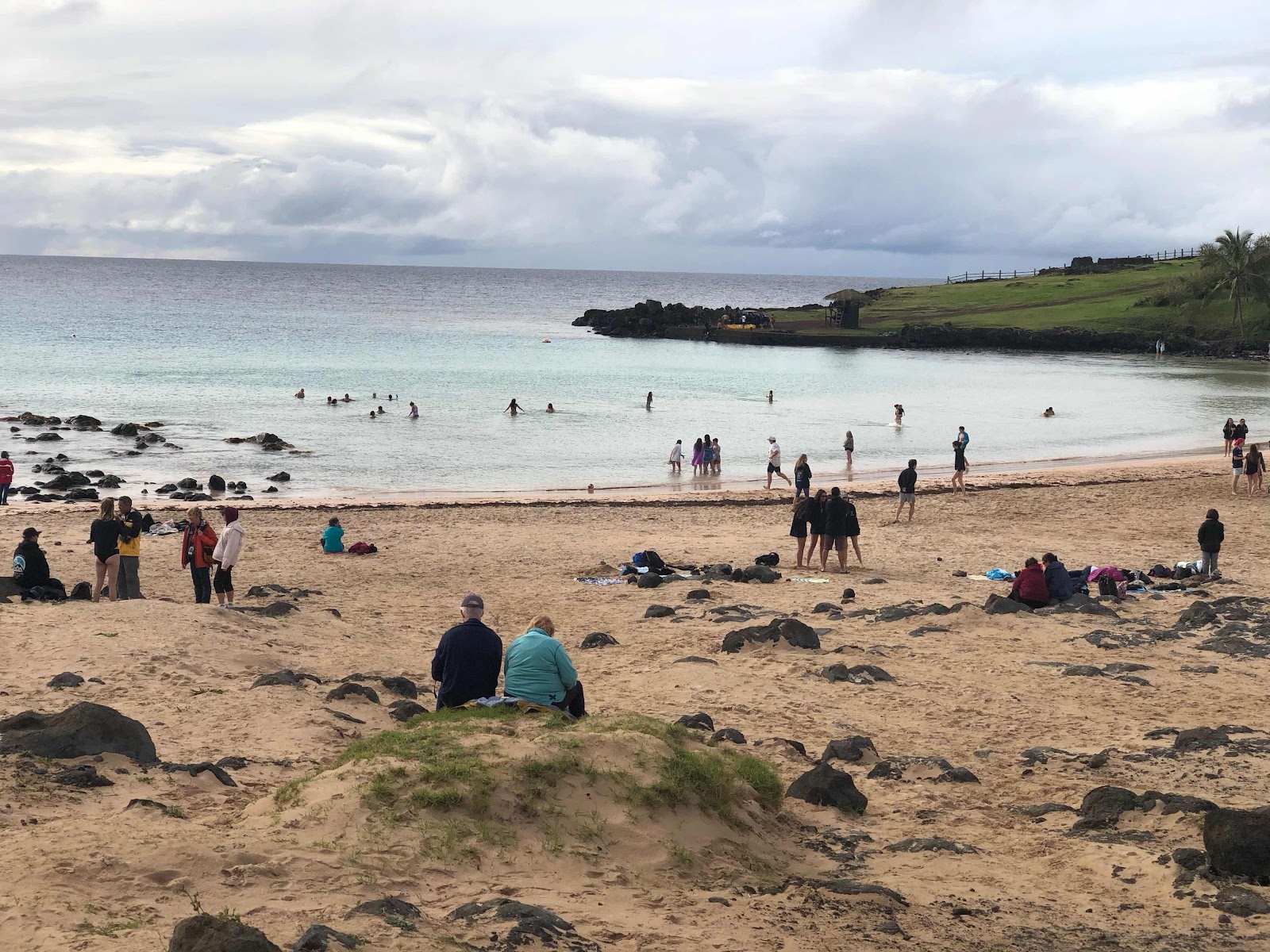 Finally, after a day of touring, there was time to check the night skies for any astronomical observing opportunities.  Hmm, nope, the clouds were mostly always present, just as OCA Astroimager, Dave, had predicted.  But I had noticed, just by chance of being awake at something like 5:00 AM, that the clouds were pretty sparse.  My first early morning attempt at doing some astronomical observing was frustrated by my taking about 10 more minutes, once I had spied that the clouds were sparse, to pull my red dot finder out of the suitcase and attaching it and camera to the tripod.  Once this task was complet, I found to my disappointment that the clouds had rolled back in and spoiled any chance of observing that morning.  But the next mornings, I already had all the equipment ready to go and when I spied the just partially cloudy conditions at 5:00 AM, I moved the camera, red dot finder and tripod, just outside our hotel cabin door and snapped a few photos, while still in my PJ’s.  I had intended to move about a block away from our hotel to escape some of the nearby trees and streetlights, but the barking of the stray, but usually friendly, dogs, and me, just dressed in my PJ's, elected to not go any further.  I had wanted to find the LMC and SMC and then use the longer 200mm lens to get some more detail, but since I couldn't see the objects, I was not going to be able to use the red dot finder to aim the longer focal length lens.

One of my favorite targets, which even in the city and hotel light polluted location, was the Milky Way, which I could still make out with my naked eyeballs.  This shot was a 25 second exposure with the lightweight Canon M100,  mirror less camera with 15mm zoom lens. I really didn’t recognize anything else in this Southern sky and didn’t use any astronomy apps or books to identify other constellations.

I did try though to find the Large and Small Magellanic Clouds, which had always been on my witch list the moment we decided to come to Chile for the 2019 eclipse.  My earlier attempts had been either clouded out or I messed up and didn’t have the camera pointed in the right direction.  Even on this relatively clear morning, I couldn’t really see the dim SMC or the somewhat bright LMC, magnitude 2.7 and 0.9, respectively. Each of these objects are composed on something like a hundred million stars and each is in orbit around the Milky Way, our galaxy.  The SMC and LMC too far below the horizon to ever be seen from the US.  Although they are dim, they appear to be quite large on the sky.  For instance the LMC, if bright enough, would appear about 20 times the size of the full moon.  The SMC would appear about 10 times larger and for comparison, the Andromeda Galaxy (M31) would appear only 6 times larger than the diameter of the full moon.

But this lucky morning, everything seemed to work out and I got the following 25 second, 15mm image.  The SMC is just above the left side of the tree and the LMC is above the tree at about 45 degree angle to the SMC.  Pretty neat to have achieved these two wish list targets.  Note that I could not see either object with my own naked eyeballs, but the longer exposure brought them out.  I used the GoSkyWatch app,to sort of pinpoint where in the morning sky the objects should be found.  In addition I relied on other observers at breakfast that morning and Astrometry.net analysis, to confirm my judgment.  Hooray, it finally worked out, even though the lighting conditions didn’t allow me to view the objects with naked eyeballs!

So after that early morning success, the third time was the charm, it was time to pack our bags and return to the airport for our final flights to Santiago and the back to LAX and the Palmia Observatory.  This has been a fantastic adventure, what with the total solar eclipse, visiting the Atacama and now finishing off with Rapa Nui and all the friendly and helpful friends and people all over!