Out from the bunker to photograph the ISS; What are light echos in astronomy? More Starship progress; Sean Carroll to discuss big ideas in the universe

Well this week we have been "sheltering in place" and we can offer some comments on some interesting scientific topics and other space news, but first we received a last minute note about the ISS traversing the night sky.

So, after being cooped up for several days now, a chance to go outside and see the ISS pass overhead, even though we have seen this many times before, was just too good to pass up.  So the pass was projected to begin in Orange County area at 7:28 PM and that gave me about 30 minutes notice to grab the flimsy tripod, get a little more charge in the DSLR and head outside for the view.  The clouds were heavy and the skies not that dark at 7:20, but I could use Venus as a good target to focus.  I elected to use 75 mm telephoto setting so that I could get longer time exposures of the ISS and trace its path across the sky.


So, right around 7:28, I spotted the ISS moving from the southwest through the clouds and used a red dot finder to get it in the LiveView screen.  Unfortunately, I was a little bit in too much of a hurry and didn't let the tripod settle down and you can see some jitter in this 4 second image.  There are a few stars visible even though the night sky is not all that dark yet.

Then about a minute latter the ISS had moved high overhead and was on its way down in the northeast.  This image is an 8 second exposure.  So, even though we have seen the ISS before, just getting outside and looking at the night sky was a welcome relief.
Now for another topic, have you heard of using light echos in astronomy?  Well, one morning when I was opening the shutters and the sunlight came streaming in and I looked away to shield my eyes but turned around and imagined the sunlight that was reflecting on one wall back into my eyes.  The reflected light gets to my eyes after some time delay compared to the original sunlight.  I wondered if something like this might happen in astronomical measurements and over astronomical distances.  Well, after searching through the physics arXiv I found over 50 papers with the words "light echo" in the title; probably more but the words don't appear in the titles.  The earliest paper I saw was published in 1993.

So light echos are analogous to sound echos where the original sound reaches our ears and a distant echo that has traveled over longer distances and then comes back to us.  In astronomy this light echo can be used to get a better estimate of distances to objects because of the fixed velocity of light.  The following screenshot from ESA shows the concept.  Imagine a supernova or some other short term variation of luminosity of a star, such as the star at the right hand side of the screenshot.  The light pulse would expand spherically and eventually reach the telescope on Earth.  The expanding sphere of light also collides with some gas cloud or other structure, shown just to the left.  This gas cloud then reflects light outward in its own spherical pattern.  That light then travels to other and the path distance and time taken to reach Earth is different, but correlated with the original light pulse.  The delay time between these two signals is then related to the path difference.

So, how is this delay time and correlation used in making astronomical measurements?  A good example comes from the measurement of a variable star in the constellation Monoceros, known as the Unicorn, which is visible now at this time of year (between Sirius and Procyon).  You have probably seen Hubble Space Telescope (HST) images of one particular star called V838 Monocerotis, which is shown below.


This previously unknown variable suddenly brightened in 2002 by a factor of about 10,000 times.  The four images of the star show how it look at different time periods with the upper left taken in April and then on the right side in May and then the two bottom images were taken in September and October.  The upper left panel looks a little different from the other three because only one HST color channel was used at that time.  V838 is a red supergiant.

Now, when I first saw these pictures I thought what was seen was that the star exploded and we were just seeing the outflow of gas and dust from that explosion and it was just moving further and further away as time passed.  But, that is not really what is happening.  True, the star blew off some gas and mass when it brightened, but what we are actually seeing is that the expanding sphere of light is just now reaching gas and dust that is already present around the star.  The gas and dust is being illuminated and the reflected light from the gas is now what we finally see.  This light is the echo.

So, it is pretty neat!  So now everytime I see some set of photos like this I have to ask: Is what we see due to gas and dust being blown out from a star or is it just gas and dust that was already present around the star and it is just now being illuminated by the light form the burst of light from the star?  A quick look at the 50 papers shows that light echos have been used to analyze other star systems and supernovas and gain a better more accurate understanding of what was going on.  For instance, light echos are apparently being used to reanalyze what happened during the supernova that was first reported by Kepler in 1604.  Wow the echo time, if we are still seeing the echo now, is over 400 years longer in its indirect path from the supernova.  I can't understand exactly what the astronomers are looking at to measure a delay time and correlation over 400 year delay time?  The supernova happened 400 years ago so what time delay is being measured and correlated? We will have to look more into that.


Now, on to more news from Boca Chica and the status of SpaceX Starship development keeps coming in from the TwitterSphere.  This time Marcus House described the latest progress and showed, as an example of Elon's fast pace development process, a video of the StarHopper program, which was the forerunner of the Starship.  We had seen this vehicle parked by the road edge at the Boca Chica launch site and wondered "what is that strange looking rocket ship thing"?  Now we know, it was the StarHopper.  Thanks for that Marcus!

In addition, he showed us some of the stacking work going on inside the high bay building there.  Here you can see some additional rocket rings being hoisted into place.  Yep, Elon keeps driving the team for faster progress and things are moving very quickly in Boca Chica.  In the last post of March 20, 2020 we showed images of the nose cone being fitted on a separate stack of rings.
So, we see that there is a lot of work still going on to get the next Starship, SN#3, we assume, ready for its first test hop flight.  Now, it is not clear if we will be able to travel to Boca Chica to witness the test flight or not.  Our previous blog post of March 16, 2020 detailed our reconnoiter trip there to get the lay of the land and find out how easy it would be to observe the flight.  But, with ongoing travel restrictions and "shelter in place" rules, it is hard to see how to plan for short notice travel to Boca Chica and then how it could be classified anything else but "non essential."   Although I have to say, just as a side comment, that I don't like the term "non-essential", but it is not clear what better term to use.  How many of you view what you do as "non-essential." Ok, ok, we are in the early beginning of a serious pandemic!


Finally, if you are looking for other videos to watch as we continue in our shelter in place situation, you might want to follow Sean Carroll, Caltech, discuss in this upcoming free video series on the biggest ideas in the universe.  I follow Sean all the time and he already has weekly podcasts of interviews with various authors and scientists.  You might also enjoy his weekly podcasts, but for now you can check out this latest, impromptu series at:
http://www.preposterousuniverse.com/blog/2020/03/19/the-biggest-ideas-in-the-universe-introduction/

Now, actually finally, as I peer out of my burrow this morning, I can confirm that the sky has not fallen, but the clouds do have a strange look about them.  It reminds me of a fish and its bones.  We can still enjoy looking up at the sky and wondering about the nature of it all. 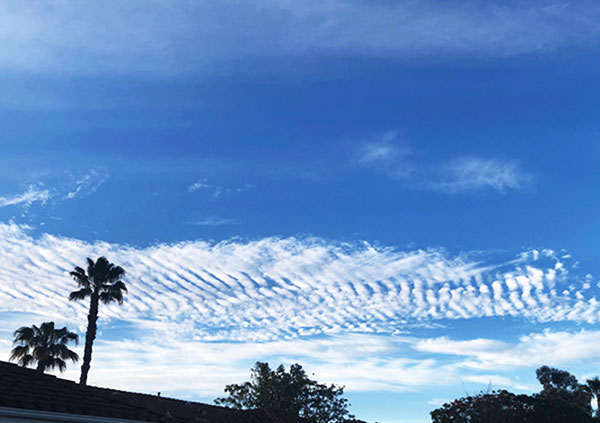 Until next time, here from our bunker, stay sane, stay safe,

Be sure to check out over 400 other blog posts on similar topics
If you are interested in things astronomical or in astrophysics and cosmology
Check out this blog at www.palmiaobservatory.com