Get ready for the Jupiter-Saturn Conjunction on December 21; Wow, SN8 finally does test hop, completes belly flop maneuver, but explodes after hard landing on launch pad

Well here we busy with American Geophysical Union (AGU) 2020 Fall Meeting, but we took some time to practice photographing the upcoming Jupiter-Saturn conjunction and to watch the SpaceX Starship SN8 test hop attempt.

First up, check out this image that includes both Jupiter and Saturn.  The planets are very bright and easily visible in city lights.  Their orbits now make them appear as if they are approaching each other and on December 21 they will be almost on top of each other.  It should be pretty good viewing so get ready to check it out and have your cameras ready.  This photo was taken on December 6 with a DSLR, 300 mm lens and 1/4 second exposure.  A shorter exposure, maybe 1/15 second or around that should still capture any of Jupiter's major moons and Saturn without over saturating Jupiter.  I used my lightweight, flimsy tripod, and it was not easy to get good focus, but you can begin to see the image of Saturn is a bit elongated due to its rings.  For those of you with a bit longer focal length, you should also be able to get good images of the rings. 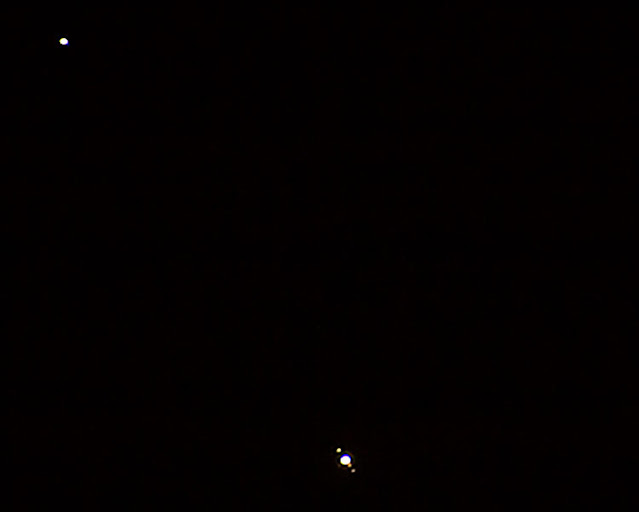 The other big space news item is the Starship SN8 test hop.  After a couple of scrubbed attempts made earlier in the week, the launch finally took place.  It all seemed to go fairly well, until several minutes into the flight, there seemed to be engine troubles and two engines were shutdown with some out of control fire going on inside the rocket.  We wait for official reports about the events, but anyway for now we can comment on some of the fantastic photos and successes of the launch.

This first photo from SpaceX shows the Starship SN8 on the launch pad with the sun in the background.  Normal venting is occurring.   We've been waiting for this launch for several weeks now and I am still disappointed that I can't be in Boca Chica to witness it. 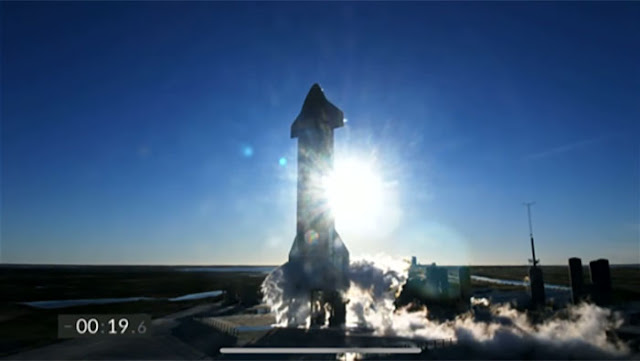 And the launch actually begins.  Here we are at T = 0 and we get views from the ground and two views from SN8 itself.

Wow, it is up and away for SN8.  The inside view of the rocket shows all three engines operating properly.  The other camera view shows the ground below the rocket.

Oh-oh, now we start to see what looks like a problem with some of the engines.  We will have to wait for official announcement about what was going on, but it doesn't like like a planned shutdown of some of the engines.  In other frames from the video we can see some internal fire surrounding the engines and some damage and components falling off the walls.

Nonetheless, even with some strange engine behavior, the Starship SN8 seems still to be in control as it reaches its peak altitude and slowly starts to fall back to Earth,  Here you can see that the control surfaces seem to be working perfectly to set up the rocket in this belly flop maneuver, which helps bled off the kinetic energy by maximizing the surface area perpendicular to the ground.

When the Starship gets close to the ground, the control surfaces act to position the rocket more vertical and then the landing engines can turn on to complete the landing.  Not sure where the green colored exhaust is coming from, but at least one of the engines is working.  But is that enough?

After the smoke cleared away, we can see that the Starship landed perfectly in the center of the landing pad, but it seems velocity was way too high.  Was the landing velocity too high because of an engine failure that we could see early in the flight?  We will have to wait for more official information.  But in the meantime, we saw that SN8 confirmed that the belly flop maneuver and landing navigation systems seemed to work perfectly.  Elon and SpaceX strive for rapid progress and failures like this are really just one step on the fast progress to successful operation of future fleets of Starship to the Moon and beyond to Mars.