Well, we have been tied up with attending the virtual AGU Fall meeting, but can comment on preparing for the upcoming conjunction of Jupiter and Saturn and also mention more news about the Starship SN8 test hop.

First, though we elected to move away from the lightweight, flimsy camera tripod and move up to a sturdier tripod that would also support the heavier 600 mm telephoto lens.  With this setup, it was going to be much easier to adjust the focus without the whole assembly vibrating and wobbling all over the place.  The separation between Jupiter and Saturn is now close enough that they both fit in full screen image with the 600 mm lens.  So, keep looking up and practicing for the conjunction on December 21.

So, the weather and clouds have not been very cooperative, but one early evening the clouds stayed away and we got some photos of the approaching conjunction.  With the longer 600mm focal length, the rings of Saturn showed up occasionally in the camera LiveView screen, but mostly the seeing was bad enough to just show Saturn as a blurry, oblong patch of light.  Maybe those astro-photographers out there with longer focal length can get some good images of Saturn's rings too!

Also there is a tradeoff between exposure settings short enough not to oversaturate the images and also long enough for the dim moons to show up at the same time.  My compromise was to concentrate exposures in the 1/8 to 1/60th second range.

In this photo, the apparent distance between Saturn and Jupiter is only 0.9 degrees.  The distance is not quite the same as two full moon images placed next to each other.  The angular separation keeps getting smaller and smaller, so be sure to take a look on December 21, when the separation will be minimum.

We also received more details about the recent Starship SN8 test hop, which ended with its destruction upon the landing attempt.  But a tweet from Elon shows that good data and performance of the prototype was other wise excellent.  The control of the Starship during the fall back to Earth, while bleeding off re-entry kinetic energy, was well controlled and proved the concept and control system.  Other tweets indicated that there was not an engine failure during the flight and that the engines were in controlled shutdown.  The green flames seen during the landing were apparently due to some engine damage, although the hard landing was caused by lack of  fuel pressure, not due to the one engine failure.  The green flames could have been from the engine thrust bell, made of some copper alloy, that got superheated due to lack of fuel used to cool the bell.

But all in all, it was a pretty successful test flight with good verification of the belly flop maneuver.  Go Elon, let's go to Mars! 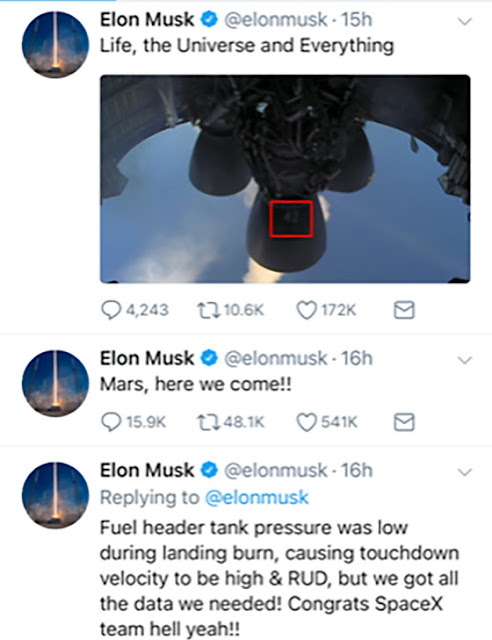 Besides waiting for the latest news about Starship, we have been reviewing some of the presentations at the American Geophysical Union (AGU) Fall 2020 Meeting.  I had hoped to attend this meeting in person, at its normal location in San Francisco, but that did not happen this year.  The AGU meeting covers a wide area of geophysical sciences, including planetary science.

I used to work with a lot of earth science folks when I was in the big oil business.  It was interesting to see that Chevron is a big sponsor of AGU.  I am actually a retiree of Chevron, even though I never worked a day there, because they acquired the company I used to work for.

Many of the AGU presentations were very technical and intended for specialists in various fields. I planned to review some of the sessions on geomagnetism, solar system magnetic fields, atmospheric lightning and oceanography, as well as sessions on planets and asteroids and other minor planets.   Mostly though, I understood and enjoyed some of the plenary session speakers where the topic was of more general interest.  We might be able to offer some comments and reviews of the more technical presentations next time, but for now one very good example is the presentation given by Astronaut Leland Melvin.

Melvin studied chemistry and material science in college and played football at the University of Richmond.  He even played professional football for a time until a hamstring injury cut his career short.  He worked on optical fiber sensors for NASA and then was selected for astronaut training.  Unfortunately, during some training in the Neutral Buoyancy tank, where trainees work underwater as a way of simulating working in outer space, he suffered some ear damage and was told he would not be able to go into space.

This was the time for Leland to really practice having the right stuff and he was able through a lot of hard work to regain approval to go to the ISS as a mission specialist.  He operated the Canada arm to grab and install the Columbia mission module to the ISS.

He also showed some photos of life aboard the ISS.  In this screenshot, taken from a video of the events, we see Leland trying to get close enough to enjoy a treat made of a floating ball of water with embedded M&Ms in the zero G environment.  I guess it is not work all the time!

Leland's inspirational message told of some of the early events in his life that got him interested in a career in science and engineering.  He said, as a youngster he liked reading about "The Little Engine That Could" and watching Curious George and the Man in the Big Yellow Hat.  He developed his curiosity and appreciated his mentors who encouraged and supported him, just like the Man in the Big Yellow Hat.

Now after a successful career as an astronaut, Leland spends some time providing encouragement and mentoring to other young scientist wannabes.  Thanks for your presentation and being a great role model, Leland!

Another of the plenary sessions that I really enjoyed was the discussion with the 1st woman team to over winter in the Arctic.  Hilde Falun Strom and Sunniva Sorby spent 9 months of a planned, isolated,  arctic adventure, plus 3 additional months, due to COVID-19, in an isolated abandoned trappers cabin in an isolated part of Svalbard Archipelago.   While there, in splendid isolation, they conducted scientific research, not as professional scientists, but as citizen scientists.  They were in contact with thousands of students and interested persons around the world and while there they were asked to make various scientific measurements.

Their website provides more of the interesting details.  They were located 140 km away from nearest civilization and had no running water or electricity and no visits to the grocery store.  Check it out: https://www.heartsintheice.com/

Their arctic adventure was conducted at an isolated location in the Svalbard Archipelago, named Bamsebu, shown on the map below.

Now just in case you are wondering where Svalbard is, check out the map below.  Resident Astronomer Peggy and I have been to Tromso, Norway, before on a cruise ship, but didn't have the opportunity to travel the additional 657 miles to Svalbard.  We passed up on a shore excursion where we could have overnighted in a tent with a native family and looked up at the dark sky for a chance to see the northern lights, but we declined the invitation.  We did go out on a partial night tour for an attempted viewing of the northern lights, but we ran out of luck and we were clouded out.  Darn!

In this slide, we see the isolated little cabin where they spent a year above the Arctic Circle.  They said that the little dots in the front of the cabin are native reindeer and the little out cabin to the right of the main cabin has a polar bear looking around.

Their cabin was located several hundred miles from any other civilization on Svalbard and they enjoyed the very dark skies.

Finally, they showed a great photo of the northern lights as seen from Bamsebu.  Thank you for the great presentation, Hilde and Sunniva!