This is the first blog delivered from my new gmail email address.  Hope all goes well.

Again this week the weather has been a little cold with a bit of rain, so this week's activity has been mostly inside.  I started the week with the CSULB physics colloquium where Professor Long, UCR, described the search for supersymmetry at the LHC.  Later in the week, Nobel laureate Steven Chu described the science of climate change and mitigation at the UCI lecture series.  Finally, there was the weekend series of
presentations celebrating the 100th anniversary of Einstein's Theory of General Relativity held at the Huntington Library and Caltech.

All of these lectures fit in well with my continuing study of physics but each also touched on some aspect of astronomy.  Remember that supersymmetry theory is that extension of the particle physics standard model to include the least heavy super symmetric particle, which is considered the leading contender for what makes up dark matter.  If this or similar particle can be discovered at the LHC, this will be the first step in explaining the mystery of what dark matter is all about.  Chu's presentation included the observations made from space borne observatories that measure worldwide temperature, increasing sea levels and melting of land based ice.  Finally, general relativity forms the basis for calculating the observational predictions of the expanding universe and black holes.  And GR is applicable to more mundane applications right here on earth including how the calculations of how time is distorted by gravity as predicted by general relativity and special relativity and corrections are needed in order to make our GPS systems possible.  Clocks run slower on the Earth's surface, due to higher gravity, than at altitude in an orbiting satellite.  Also the satellite velocity causes its clock to run slower than a clock at the surface.

I do at least have a couple of images taken at the GR celebration.  Nothing spectacular, just images of how close to the front stage we were able to get. 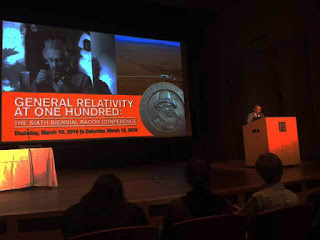 For the technical presentations, we were able to get right up close, in the second row, and had good view of the speaker.  We were not quite as lucky for the evening keynote presentation by Kip Thorne.  He is probably going to be one of the three Nobel winners for the work leading up to the LIGO observation of the merger of the two black holes.  He was the technical advisor for the movie "Interstellar" and has written many volumes on gravity and black holes. 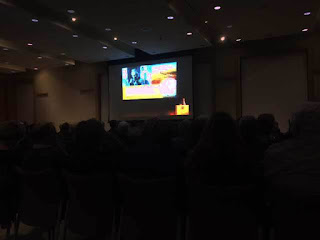 All and all this GR at 100 celebration was a great event and included many good presentations.  There was even a presentation about the sociology of science by Harry Collins, which was especially interesting.  He was allowed total access to the LIGO team and he was able to follow the whole sequence of events from how the detectors were built, how approval to build them was obtained, and even how the initial discovery was made and the decision about how much analysis was necessary before telling the world of the discovery.  Very interesting.  He also talked about how science is a social activity and is affected by the cultural expectations in the society where the discover was made.  For instance, the requirement regarding how many standard deviations of reliability are needed before a discovery can be claimed is set by cultural expectations.  Some fields need only, say 2-3 standard deviations, while others like particle physics require 5-6, and some practitioners argue for increasing that level even more.  Are member that the standard deviations here refer to how likely the indicated results could happen just by chance rather than the underlying theory.  Six sigma statistics means that only 3 times out a million times would the experimental results be expected due to just chance.

Finally on a personal note, Science Nerds and Theater Impresarios, Scott and Sandra, are members of the Huntington Library and offered Math Whiz, Dave and myself to tickets to enter and tour the Huntington Gardens.  Thank you much Scott and Sandra.  It's great knowing the right people.  I looked forward to touring the gardens and was quite emotionally excited about it, but as luck had it, it started to rain after lunch and we couldn't go outside for the tour.  Darn, I really wanted to go.   Only later when I returned to observatory that night and mentioned my disappointment about not touring the gardens to Resident Astronomer Peggy, was I reminded about the rest of the story and why I was saddened by not taking the tour.  Peggy reminded me that that location was where I had originally proposed to her.  Yikes, how did I not remember that?  It seems I remembered emotionally why touring the gardens was important, but had complexly forgotten intellectually about the real event that happened almost 30 years ago.  Ok, ok, what about the rest of you amateur astronomers; are you really saying that something like this hasn't happened to you too?