Well this week started off with just one physics colloquium and no Lie Algebra class.  So it's been a pretty quiet week and next week is spring break at CSULB so I should have even more time to work on the orbit calculations.  Hey, wait a minute now, why should I do some work on orbit calculations while the rest of physicist wannabes are off from school?  Ok, ok, maybe just a little work and a little break.

Anyway, before discussing what little bit I did getting ready to do
the orbit calculations, I wanted to provide a couple of remarks about this week's colloquium where Prof. Tanedo, UCI and UCR, talked about his collaborations study of dark sunshine.  Dark sunshine is the term used to describe the conjectured production of observable photons generated by dark matter annihilation in the sun, other stars or even the Earth.  Gravity is the primary natural force that interacts with dark matter and given that it fills the universe, it should be more concentrated where the gravitational potential is high, which is why it tends to clump in large blobs in the halo around galaxies, and should also tend to collect in the center of large objects like stars and the planets also.  Then when large collections of dark matter particles get close enough together, more and more annihilations occur, which should result in visible effects.

But how does dark matter lose enough angular momentum to spiral into planets and stars?  Ordinary matter can lose angular momentum by colliding with other normal matter and radiating away excess energy, then not be stuck just orbiting the object, and be able to fall into the object.  The problem is that most theories of dark matter did not predict much interaction that would allow this to happen.  This is where Tanedo described some aspects of new theories that now predict that dark matter can very, very slightly interact with normal matter and through elastic collisions, lose kinetic energy and thereby fall into heavy stars and planets.  Wow, if this new theory pans out it will provide an explanation of how dark matter can accumulate in stars.

There are a lot of smart and creative physicists that dream up all sorts of fancy theories, but physics and science makes progress by collecting evidence to support better ideas and to weed out the wrong or less useful  ideas.  So rather than just relying on observing the gravitational effects of dark matter, which all on their own provide very good evidence for the existence of dark matter, but by observing the annihilation products from those locations where a lot of dark matter has accumulated, this new evidence will provide support for the new theory and provide a better understanding the characteristics of dark matter.  So looking for dark matter annihilation from the sun or from the Earth might be potentially easier than looking for annihilations that happen at large distances from us in the galactic halo or very noisy center of the Galaxy.  The sun should be a great trap for this dark matter, but the sun has a large magnetic field which deflects the annihilation signal and it would not be easy to measure reliably.  Annihilations from the center of the Earth would be easier because the Earth had a much weaker magnetic field and the source is so much closer to us.

Tanedo and collaborators recognize and propose to use the existing large scale neutrino detection laboratories.  These labs could be searching for annihilations at the same time they are searching for neutrinos.  This is a great selling point in that no money need be spent on building the annihilation detector. In fact the best lab for this type of work is the large IceCube array located in Antarctica.  A high flux of annihilation products should be observable coming directly from the center of the Earth.  IceCube is sensitive enough to detect this signal.  So now we just have to wait.

That's pretty neat stuff, but ok, ok, enough of physics and I imagine you asking for some more direct amateur astronomical pictures?  Well, I've reviewed again the distance data between the moons of Jupiter and Jupiter and have picked the observations that I will use as the test case to duplicate the science behind making orbit calculations and predictions.  This revised start is attached.

Recall the chart I presented last week that showed distances from the moons to Jupiter as measured with a couple of dozen photos of Jupiter and moons.
Remember how a pattern in the observations slowly became apparent as more and more data points were collected and the sinusoidal nature of the moons distance from Jupiter was observed.  I revised the chart from last week, and in fact discovered that I had misidentified some of the data as belonging to one moon when in reality the data should be assigned to another moon. 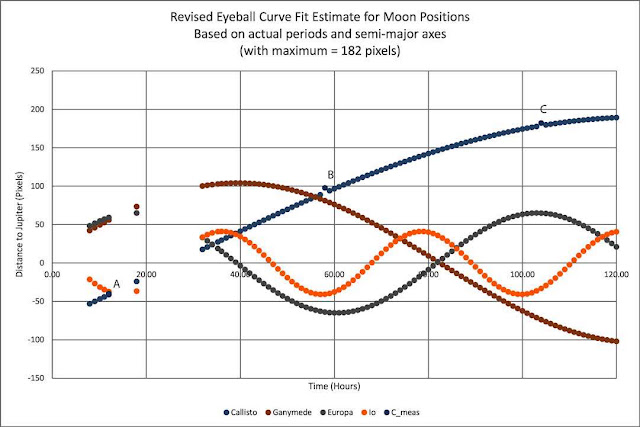 Based on what we know now, I could see that I had mischaracterized the data between the moons Callisto and Ganymede.  I think this latest chart is correct and picked three data points for Callisto for use in measuring the orbital parameters.  So, I've departed a little bit from my goal of duplicating the work done by astronomers a couple of hundred years ago by cheating in selecting a moon that should be easier as a test case. The three data points, labeled A, B and C, represent observations taken two days apart.  Now since we know that Callisto orbits Jupiter with a period of a little over 16 days, these three data points cover just 4 days.

These three data points are all that is theoretically required to calculate Callisto's orbit.  The next step is to compare the moons positions with the background stars and measure the moons RA and Dec for those three dates.  Then these three astronomical dats points will be processed by the orbit calculations algorithms.  This orbit and the resulting 6 Keplerian elements are more descriptive and predictive of the orbit than the simple orbital distance calculations already performed.  This more detailed analysis shows the true 3-dimensional orbit and not just the 2-dimensional plots of distance found by counting pixels in my camera frame.  Check out the Wikipedia page:

If you're interested in more of the gory details. That's still going to be a lot of work and steep learning curve, so luckily I will postpone that till next week.  So rather than start that work now, we were able to go out to dinner and have a few martinis. We met friends, Scuba Diver Volunteer for the Aquarium, Larry, and Just Getting over a Broken Arm, Anne, at the Rusty Pelican.  After a fun evening, Resident Astronomer Peggy and I returned to the observatory and found that Astronomer Assistant Ruby had not destroyed the place, so that next week the orbit calculations can really begin.

So until next week,
Resident Astronomer George