Well the weather this week has been pretty bad for us local amateurs.  It makes me want to start observing in a different part of the electromagnetic spectrum.  Hey, I know, we could take up amateur radio astronomy.  If you want to consider the transition then you should check out the upcoming radio amateur astronomers annual meeting in GreenBank, WV, July 10-13.  It takes place at the National Radio Astronomical Observatory there and just being able to visit that
historic place should be quite interesting.  I wanted to go last year, but couldn't fit into our busy schedule.  Maybe this year.  At least I've put it on the calendar.

It was interesting to read that the whole NRAO observatory grounds, for miles around, is a radio free zone and no intentional transmissions are allowed.  That means no cell phones or wifi connections.  Boy, talk about being back in the dark ages.  They only use diesel powered cars on the grounds so that any spark plug ignition noise does not upset the observing.  Anyway, if you feel the urge check out the amateur's website:

Now for the big news, assuming the weather clears up for Monday, May 9, which is when we can see the transit of Mercury, where it will cross the sun's face for the first time since 2006.  Here on the west coast the transit begins at 4:12 AM, PST, and ends at 11:42 AM.  Now the sun is not up at 4:12 here on the west coast so we will miss the beginning, but the ending should be visible here, if the forecast of mostly sunny hold true.  If you are looking for more details check out the May issue of your Sky and Telescope magazine.

So, get out your telescopes, as you won't see the transit without one, and make a go of it.  I haven't quite decided which observatory telescope to set up for the viewing.  I like the idea of using the hydrogen alpha spectral scope, but it's more complicated and needs to be aligned, but at least then it would track the sun all day.  But, I'm getting lazy and want to take the easy way out.  Resident Astronomer Peggy doesn't want to do the setup and alignment and Astronomer Assistants Danny and Ruby have proven great at giving affection, but terrible at astronomical things and don't even bark at the moon.

So maybe, I'll just set up my tripod and camera, which is very easy to do, but I will use my new 600 mm lens with an attached solar energy filter.  Check out the attached photo of this new 600 mm lens.
It weighs about three times as much as my camera and luckily only cost a little bit more than the camera.  With this new lens, I'll be able to get twice the resolution as with my smaller 300 mm telephoto, and just half the resolution of the solar scope using the 2x Barlow.  Even with the 600 mm lens, Mercury will show up in the image as a black spot of only about 7 pixels in diameter.  Very small.  I hope I don't regret not getting out the bigger scope.  Maybe if the weather is great and I don't see Mercury with just my camera and lens, I'll breakdown down and get out the bigger scope.

I wanted to see what to expect the sun would look like with the 600 mm lens, but the weather has just not cooperated.  I waited around for a couple of hours today to see if the occasional patch of blue sky would allow for a clear shot of the sun, but it just wasn't happening.  I finally took my best shot, clouds and all.  Check out the attached photo. 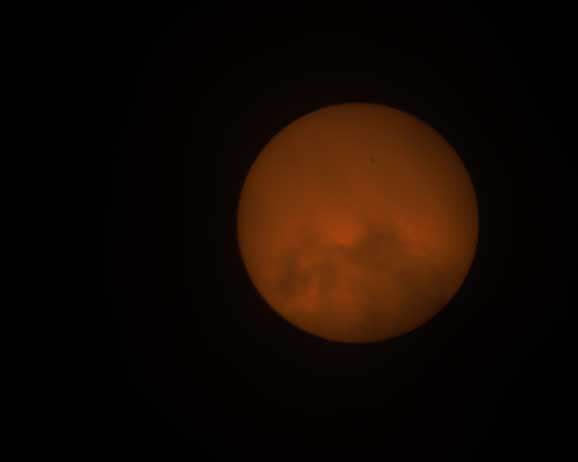 Hey, at least it seems the sun spot from last week is still there.  I hope the weather clears up more for Monday.

Finally, without any good weather, at least I found the latest video musical production by A Capella Science to be pretty interesting and I've pasted the reference below for your enjoyment.  The video is called Entropic Time.  Entropy is a key concept in physics, and becoming even a much deeper concept and seems to be related to gravity and black holes and has a much bigger impact than its original use in thermodynamics.  Anyway, thanks to Sean Carroll for posting the video reference.  A Capella Science has made lots of funny videos that also actually teach some valuable physics at the same time.  For now just enjoy this latest production: