Well this has been a busy week as Resident Astronomer Peggy and I get ready to fly to Switzerland for our Rhine river cruise.  There was still a little time for some activity including a lecture by Kip Thorne, some astronomical/physics hydrogen-alpha spectrum and photos and a final note on telling time.

First I received an email from
Just Became a Grandma for the First Time, Donna, mentioning a lecture by famed Cal Tech gravity researcher, Kip Thorne.  He was giving a lecture at Chapman University and I signed up in time to attend.  Thank you Donna.

I let some of the local science squad members know about the lecture but it was a little late for some to attend.  In fact I got a note from Science Squad Gravity Guy, Unfortunately Now Repairing a Fence, Ken, that he would not be able to attend and that maybe I could summarize what Kip had to say.

Well, we know that Kip had been one of the key developers of LIGO technology over the past 40 years and recently retired and now has a second career as the science advisor to artists, such as the writer and director of the movie, Interstellar.  He described his collaboration with Chapman Art professor, Lia Halloran.  He and Lia have worked together for many years now, trying to combine the science with the art.  In fact, the talk mostly covered the art and collaborative effort and as such the front part of the auditorium was reserved for art students and the rest of us physics types were consigned to the back rows.  It was still interesting to see again some of the scenes from the movie Interstellar, particularly the giant black hole, Gargantua.  He described how the ending of the movie was NOT supposed to be completely understandable, so it wasn't just me who was confused by all the events including the "bulk creatures" who lived in the fifth dimension.  Oh well. I did finally understand how the image of the black hole, with accretion disk and background stars, was created by light being bent from back and top and bottom of the disk to the camera.  Anyway, it was pretty interesting. He had lots of anecdotes about the various collaborations and personalities, but too detailed for me to recall and tell again.  I hope that summary helps, Ken.

I got quite involved again this week with solar images beginning with the recent transit of Mercury.  I showed last week some of the images taken here at the observatory.  Even though the weather didn't allow us to see the end of the transit, one image forwarded to me by Legacy Coder, Now studying physics Full Time, Larry, in which some solar prominences are quite visible.  See the first attached photo. 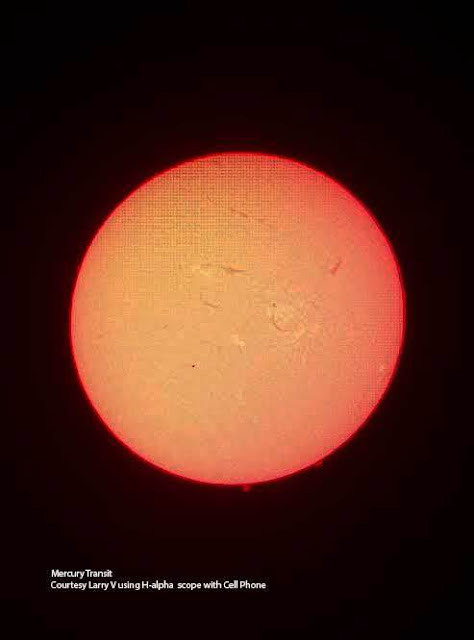 First I should say that Larry used a hydrogen alpha scope and then surprisingly captured the image using his cell phone right next to the telescope eyepiece.  I had not seen that detail of prominences for quite some time. Pretty neat Larry! 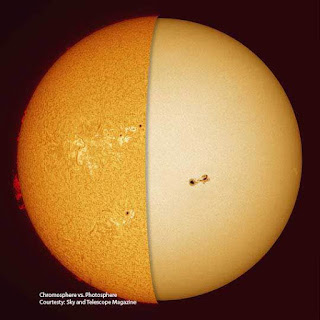 Note how the deeper layer of the sun, the photosphere, is where most of the light originates and where most of the sunspots are easily observed.  The next outer layer is the chromosphere and this layer represents maybe a thousandth of the light intensity when compared to the photosphere. This means if you want to see the chromosphere and prominences, which otherwise get swamped out by the bright photosphere, you need a hydrogen alpha filter.  But if you want to see the sunspots then just an energy filter is the way to go.  It seems there is always a trade off.

Well, I set up my solar hydrogen alpha scope the day after the transit but could not see any prominences.  What was going on? Maybe the prominences are not always visible. Well it turns out that when I looked at some online resources that the sun was relatively quiet that day and not many prominences.  So maybe that is the answer; there just were not that many on that day.  Well yesterday, I went to the Big Bear Solar Observatory website and hey, it showed an image of the sun for that day with many visible prominences.  See the third attached photo.  Well, now knowing I should be able to see some prominences, I set up the solar scope again and took a couple of shots.  Yes, indeed, some prominences were visible.  See the forth attached photo which shows a blow up image of one of the Suns limbs.  Wow, yes there are visible prominences. 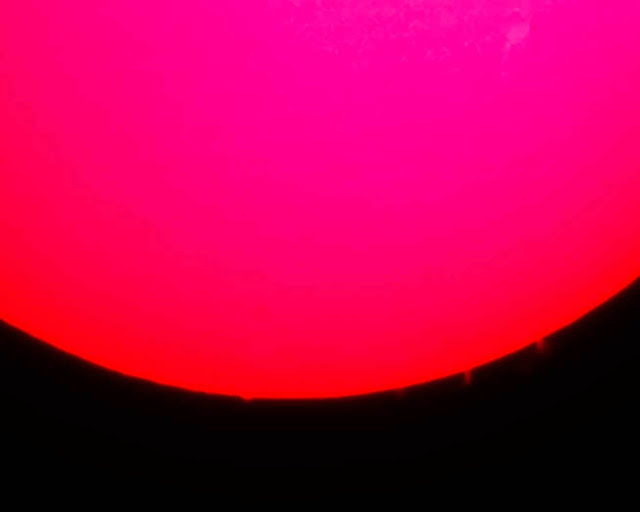 Most of you amateurs know the importance of the clock time when it comes to making astronomical observations.  I remember one instance, just a couple of months ago, when I was trying to compare the observed position of Jupiter and moons and I couldn't get my observed and calculated position of the planet to agree with its published position in the star catalogs.  What was happening?  Well, it turned out that I was in a hurry to get the proper time and liked up time in London, rather than getting true Greenwich Mean Time.  This normally wouldn't have been wrong, but at the time London was on daylight savings time, so my calculations were off by one hour.  Anyway, it seems that if you're in Chile, you have an even more difficult situation to deal with as described in this article from the Wall Street Journal.

Oops, I meant to send out this email before the start of the OCA monthly meeting and encourage you to show up too.  But, I forgot to push "send" so the email didn't go out in time.  So, I might just mention briefly that the discussion there on the strange variation in luminosity of black hole accretion disks was very interesting.  There was too much detail and mystery for me to attempt a review of that meeting now.

There are over 200 blog posts on similar topics
If you are interested in things astronomical or in astrophysics and cosmology
Check out this blog at www.palmiaobservatory.com
Posted by Palmia Observatory at 11:09:00 AM