Well the skies this week have been overcast and cloudy but with some stars poking through.  So, I mostly did some catching up on theoretical understanding of gravitational waves, but did manage to get the solar scope out and took a few photos of the sun.

I've been trying to understand how gravity waves impact matter that happens to be in their path and you will remember that last time I said I was skeptical that we could hear
gravity waves directly with our own ears provided the waves were sufficiently strong to vibrate our ears and not disintegrate our brains.  Anyway many experts say that yes, we probably could hear such waves.

When I discussed my skepticism with Searching for Gravity Waves, Dr Gary, he was quickly able to diagnose me, just like a lot of new gravity wave students, as suffering from the error of the "rubber ruler paradox".  I've found a great animation which illustrates how gravity waves would might distort Spacetime when they broadside an object, in this case a sailing ship.  Check out http://www.black-holes.org/the-science-gravitational-waves/gravitational-wave-astronomy/gravitational-waves

Note how in the second of the sailing ship animations, that the impact of gravity waves differs from the impact of other waves, like water waves, and how the ship is first compressed and then stretched in response to the waves.  My objection, based on the rubber ruler concept was that the sailors on the ship observing the effects of the passing wave would see their ruler stretched and compressed to the same extent as the rest of the ship and therefore would not notice or measure any effect.

Well, Gary is helping me see the light, or the waves in this case, and I hope to eventually resolve the rubber ruler paradox.  Because most experts do agree that the ears would be capable of hearing the appropriately sized gravity wave.  Thank you Gary for helpful discussion and insight.  One of his recommendations was that I get a copy of Bernard Schutz's textbook, "Gravity from the ground up -- An introductory guide to gravity and general relativity".  Well it arrived yesterday and I can recommend this textbook for self study for those physicist wannabes that are trying to come up to understanding of general relativity and gravity waves.  I have a copy of Schutz's other txt book on general relativity but it is much more difficult to read or understand.  I'll let you know what I find.  If any of you folks see your way through the rubber ruler paradox let me know.

Finally for all you amateur observers, who don't get excited about armchair physics and cosmology and are waiting for some real Astro images, like I said, I did get out the solar scope and took a look at the sun.  I had put the solar scope away last summer when the summer daytime hear made solar observing unbearable.  Remember that the sun is so bright that you have to sort of hide under a photographers opaque cape in order to see the Suns image on the camera display.  Well, it did take me a few moments to remember how to get the scope aligned and begin tracking the sun, but finally it all started to work.

My observing goal was to take several different image exposures to see if I could finally get some good views of the solar prominences.  The three images were taken with 4 second, 1
Second and 1/30 second exposures? 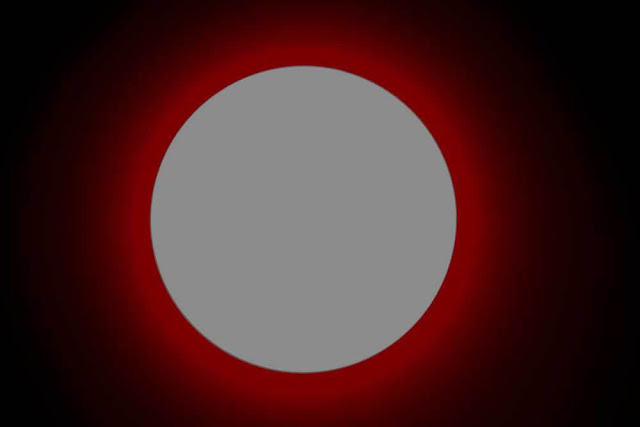 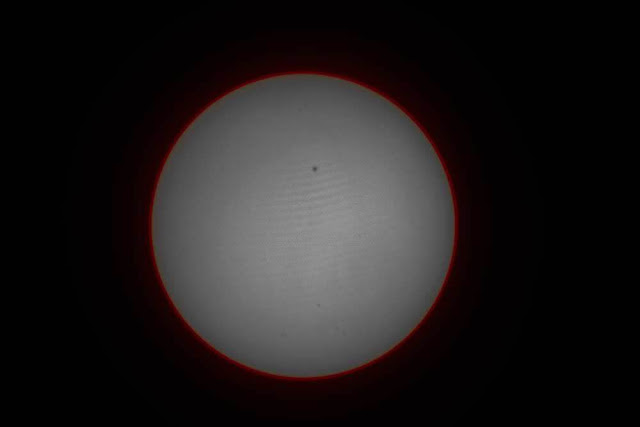 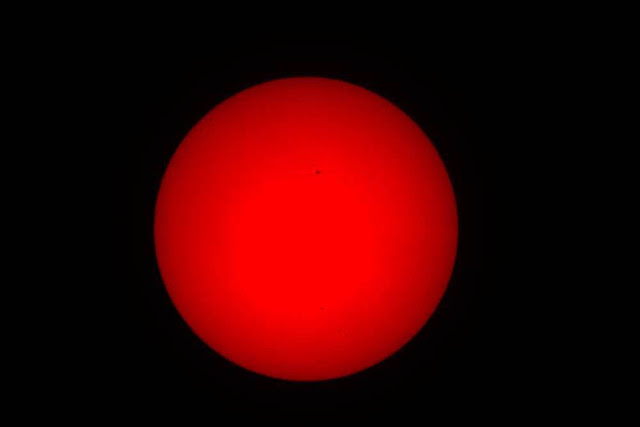 The Coronado 60 scope was set up with 2X Barlow lens to give effective focal length of 1200 mm.  The sun seems to be particularly quiet now and only one spot is visible.  The 4 second and 1 second exposures are almost completely saturated and washed out.  The white color of the images comes about because even though the solar scope only lets hydrogen alpha spectrum through, and that spectrum covers only the red wavelengths of the visible spectrum, the camera green and blue filtered pixels are just sensitive enough to red light that for long enough exposures the image looks like it is made up of white light.  The 1/30 second exposure is short enough that only the red pixels are illuminated and the green and blue pixels are found to have very little recorded light.

It's interesting that the 1 second exposure has a bright red ring.  My guess as to what is going on there is that the intensity right around the periphery is lower than in the center and so since really only red light comes through the scope, it's only at that ring where the red pixels are highly illuminated and the leakage into the other green and blue pixels is just not that much.

But, it seems I can't see much of any prominences around the edge of the Suns image.  I thought based on what I learned at Julian Festival last year that the prominences would be more visible with longer exposures.  Now I don't know what to do do next.  Any suggestions about how to capture the prominences?

So, Resident Astronomer Peggy and myself planned to attend the OCA Blackstar Canyon party this weekend, on the off chance that the clouds would clear up, but we already had plans to attend the opening night performance of "The Big Meal". Now we both like live theater, but we received a magnificent invitation from Science Nerds and Theater Impresarios,  Scott and Sandra, to attend not our regularly scheduled performance but the opening night performance and Directors Dinner, the champagne, the cocktails, cadillac margaritas, and after performance meet and greet with cast and guests, as their guests.

Wow, that was a lot of fun and the performance was fantastic.  The 90 minutes of snappy dialog takes place in a restaurant scene and it follows a couple, represented by three sets of actors, through early  adolescence, to parenthood, to grandparent hood, and beyond, with each life stage of the same couple being portrayed by the different actors.

It's fun knowing the right people.  Thank you Scott and Sandra.  Now where is the right person like Elon Musk or similar and when is he going to invite us to go to Mars or perhaps more safely just invite us on his yacht for a world cruise?

Oh well, we can still dream in our armchairs and keep looking at the skies and will take our own little river cruise down the Rhine in a couple of weeks.