Today has been a planning day for observations to be made (hopefully) later tonight, when I have a chance to get an image of Neptune, of which I forgot to do while at Black Star Canyon.  Anyway while waiting, I returned to a topic found in planetary atmospheric science, which is measuring the temperature of a planet or its atmosphere remotely with telescopes and spectroscopy.  I didn't quite get into all of that tough stuff, but I did get intrigued by
a diagram showing the Earth's idealized temperature lapse rate.  See the image, courtesy of "General Meteorology", Horace Byers, 1974.

I originally bought this book a couple of years after I graduated college because I was interested in taking private pilot lessons and understanding the weather more and now, after all those years, just happened to open up that volume while considering planetary atmospheric systems.  So, now I got sidetracked and was curious as to why the lapse rate, which describes how the temperature changes with altitude, could be represented in an idealized way by seven cases, as shown by the seven straight lines?

I couldn't quite put my finger on why those segments occurred; maybe something to do with the change in density and maybe the different amounts of absorbed radiation from the sun and heat transfer characteristics changing between radiation and convection, or some such things.  Maybe you remember why those conditions exist?  I couldn't find the answer in Byers, so I tried to remember what I had seen on TV regarding the weather.  Now, I always watch my KABC 7 TV weather experts, Bri Winkler and Ginger Zee, but I couldn't remember ever hearing about lapse rate.

﻿
Pictures courtesy their respective websites.  So, even though I always watch the weather on TV, I didn't get the answer I was looking for.  Now as you recall, several months back, I posted an article about pop singer Iggy Azalea, whose hit song include the lyrics, "I'll hold you down and teach you physics".

I've seen interviews with Iggy and yes, she apparently really wanted to be a physics teacher and might do so again if her singing career popularity declines.  I like studying physics and would sign up.

Well that hasn't happened either, and not likely to happen, so I just went back to the usual way of learning stuff and got out my more up to date meteorology book, "Atmospheric Science, An Introductory Survey", by Wallace and Hobbs, 2006. Now, this textbook appears to be excellent and I've seen hints as to the answer, especially in a chapter titled, "Radiative Transfer", which I hope will answer the question, why can the atmosphere be divided into those seven idealized regions?  I'll eventually let you know what I find.  If you know now, let us know!  At any rate, I find this textbook just at the right level for me and it seems to be a pretty complete introduction.  I feel fine in recommending it to interested readers and physicist wannabes.

Finally, I should mention one other online resource especially valuable to amateur astronomers is an app I use on my IPhone, called Scope Nights.  See the page view below. 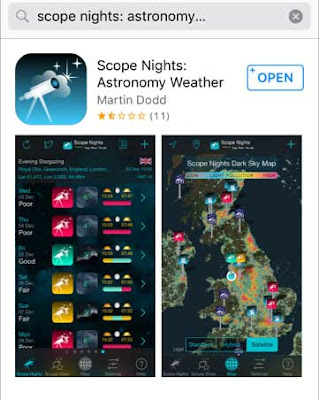 I use this app all the time and it automatically adapts to your current location and I find it pretty accurate, mostly.  Last night for instance, it said the viewing would be poor (overhead clouds).  Well, I went outside with Astronomer Assistant Ruby, and guess what, I could see three or four stars and just a few high clouds, so to me everything looked pretty good.  The app did predict the clouds and I normally can only see 3 or 4 stars anyway due to the high light pollution, so everything was just ok.

Darn!  I just checked the app for tonight's viewing weather and the forecast just changed from "good" to "fair".  Oh well, we will see.  That is just what its like for the amateur astronomer!