See you at Black Star Canyon; Kavli Prize interview with winners/ inventors of LIGO and the human side of the story; New planet discovered around our next closest star; How real science (sort of) gets done at the bar and through bets; and finally some a nostalgic look back at my years at Big Oil research in Brea

Remember when you get to the blog site you can sign up to get announcements, when new posts are posted, and not have to wait for an email from me (hooray!) and remember you can also search through the archives, using keywords, etc., to see what was going on in the almost 2 years of postings.  I had almost forgotten about all the trials and tribulations, failures, and some successes that have happened over the years.
Well its time for the Black Star Canyon Star Party this Saturday night and
OCA President and Star Party Tour Leader, Steve, will open the gates at 7:00pm,weather permitting, which does look really good by the way, so see all you members there.  Thank you Steve!
We don't have any astro photos this time, but hope to following the star party, but while we are waiting there have been some exciting news announcements. The exciting news yesterday was the announcement of the discovery of a rocky planet around our closest star, next to the sun that is.  Wow, that is pretty neat and astronomers think they will actually be able to take an image of the planet in a couple of years.  Current space travel technology might make possible a trip to this planet with travel times of about a century.  We have to get there sooner than a century of travel, right, Wants to Build a Cubesat and Faster Travel, Dr. Don?
Check out:
http://blogs.discovermagazine.com/crux/2016/08/24/earth-proxima-is-our-new-neighbor-most-promising-exoplanet-yet/?utm_source=SilverpopMailing&utm_medium=email&utm_campaign=News0_ASY-DSC_160824_000000_Breaking_Final&utm_content=&spMailingID=26329307&spUserID=MTE2MDc4NDcwMjQxS0&spJobID=864308948&spReportId=ODY0MzA4OTQ4S0#.V74U_MRHbCR
A Planet Like Earth Discovered Near Solar System
http://www.wsj.com/articles/high-neighbor-astronomers-discover-nearby-planet-1472058971


By the way, if you live in the US, you probably won't be able to see the star because it has declination of -50 degrees and doesn't come above the horizon.  Hey, maybe we should plan a trip to the south seas or somewhere.  Anybody actually ever seen any of the Centauri stars?


Now, Science Squad Member and Gravity Guy, Ken, sent a reference to the interview announcement with the inventors of the LIGO gravity wave detectors, who are this year the Kavli 2016 prize winners.  It is a great interview and shows the human side of scientific collaboration with all of the politics and funding pressure and working out the technical details.  It is pretty neat.  Cynics will say that everyone is getting their planned exposure in the press so that the Nobel prize committee keeps them in mind.  I don't know how much to agree with that.  Check it out at:

Another interesting development comes from the "Not Even Wrong" blog site (its shown in the list of websites) regarding the recent settlement of the bet, arranged years back, whether or not the LHC would find evidence for Super Symmetry.  Now Super Symmetry has been in development for about 40 years and yet there is not a shred of evidence to support this grand physics theory.  Physicist know there has to be a better explanation for the forces in nature than the current Standard Model does, but even though SUSY provides some answers, some good answers, there is no evidence that it is correct interpretation of nature.

So over the years, physicists have tried to resolve what is going on and whose theory is more correct by among other things visiting the bar for argument and discussion and placing bets on what the outcome will be.  Now, I have also found that I enjoy meeting up at the bar, not participating much in the discussion, I haven't got the foggiest idea of what to say about the topic, but at least listening, while participating much in the drinking.  In fact at one such encounter is where I bumped into fellow physicist wannabe, Searching for Gravity Waves, Dr. Gary.  Thank you Gary.

Anyway, the bet was made in about 2010 and now the losers, lose, and have to pay up.  See the posted bet showing those that thought SUSY would be found at the LHC and those who did not.  Who knew that this was how physics got done.  I'm not much of a better, but I kind of like it.  At the same time, we get a glimpse into the minds of physicists who propose some new theory and hen have to wait for experimental verification to see if their big idea is right or not.  Now, even when the data does not support their great idea, do they give up?  Not really, they just keep going on developing their big idea.  Now this is not against the scientific method because the absence of evidence is not evidence of absence, so they say.  Their point is that the LHC has just barely collected about 1% of the data that it is expected to collect over its operating lifetime.  So they just have to wait a bit longer.  Besides there are not much better theories than SUSY and string theory standing ready to replace the Standard Model.

Now, if you want to listen in to the concession speeches, which are full of physics speak gobbledygook, but sort of understandable, then check out the Youtube video:  SUSY 2016 Bet, recording a conference at the Niels Bohr Institute.  Stephen Hawking was there too, not as a loser, because he did not think LHC would find the required evidence, but he spoke a bit about his thoughts.

Finally, since we don't have any astrophotos, I wanted to indulge in a little nostalgia and recall a part of my own engineering journey, this portion of which started almost forty years ago when I walked through the doors of the Union 76 research center in Brea.  This look back and photos pasted below occurred because of meeting up with former retirees of the place and connection on Facebook pages associated with it.  See below. 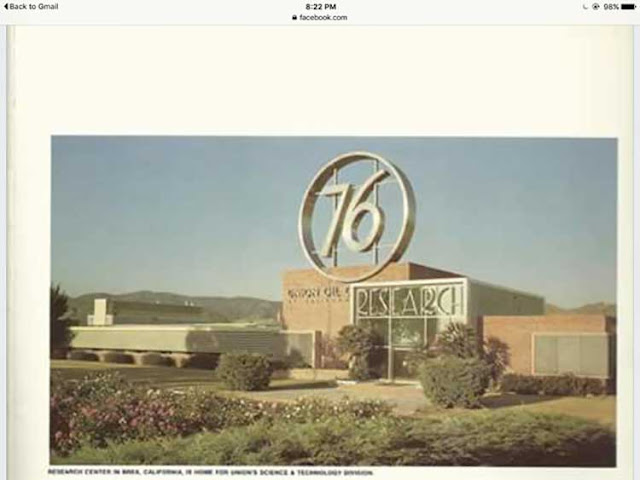 Well, I spent almost twenty years there, years which I consider the best and most fun years of my engineering career.  When I left there, now almost twenty years ago, the research center was a grand campus with over 600 scientists, engineers and technicians.


My final job there was to help rip out all the laboratories and instruments for the scientists that I had spent 20 years helping to build.  It was kind of a sad time.  Anyway this whole situation reminds me of the lyrics of Big Yellow Taxi, "...they paved over paradise and put up a parking lot..."  Oh, well, all things change.  I just hope the weather forecast for clear skies this Saturday stays the same.