Well we are offsite this week at Astrocon 2017 in Casper, WY, with 940 other amateur astronomers hearing about all aspects of eclipses from the standpoint of the science and the photographing of them and plain old just emotional experiencing them.  Some comments about that are presented here, but first let's look at a couple other of my favorite images from our journey through Yellowstone.

First, the Dragon's Mouth geyser is one of my favorite.  Steam and hot water belch from the mouth every 4-5 seconds and the roar produced is almost enough to convince me we are looking into a dragon's mouth. 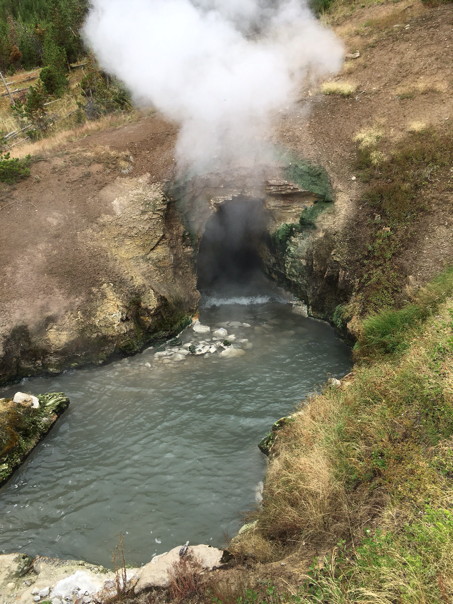 If the possibility of hearing the dragon is not enough, there are still plenty of gigantic bison still roaming freely about the place.  I am always totally impressed by the size of the bison and when they wonder out on the highway we all give them the right of way.  I wanted to take a photo just as the buffalo walked past our car, but since I didn't have my camera out and didn't want to spook the animal, I just let it walk by without as much as looking at it. 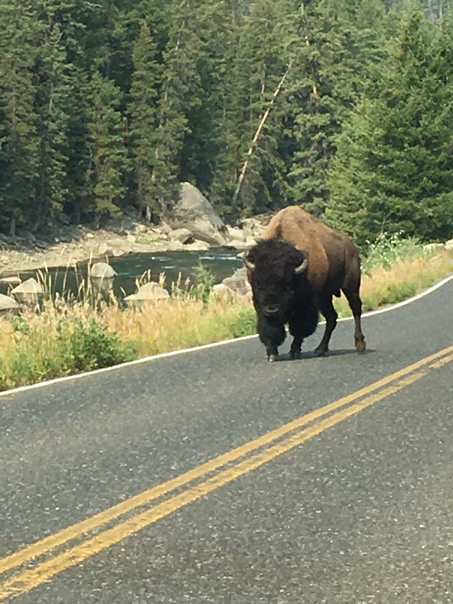 So, anyway, back to Astrocon where we have enjoyed four days of stimulating presentations and discussions. We even had a chance to go to a dark sky site at 8000 feet and we had a great time there and when I get access to a computer and can download the camera images, we can share some images of the Milky Way, which was clearly visible here. For now, Check out Resident Astronomer Peggy as she practices to capture the sun in anticipation of August 21 total eclipse. 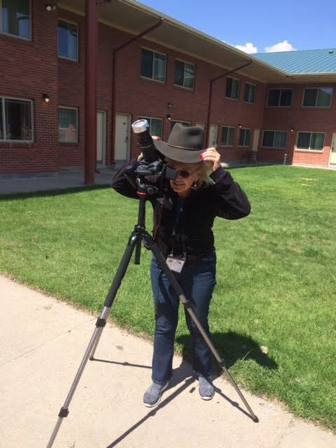 It just happened as we were picking up our Astrocon badges that we heard of someone else claiming to be the Resident Astronomer with the same name so we wondered what was going on.  Then during one of the sessions, I spied the culprit just a row or two behind us.  So here we are pictured in the photo below.  Which one is the Resident Astronomer?  Well, it turns out that the other astronomer was actually one of the Astroleague Observing Award winners from Northern California.  Congratulations George!  I guess I will have to practice a lot more if I hope to win an award! 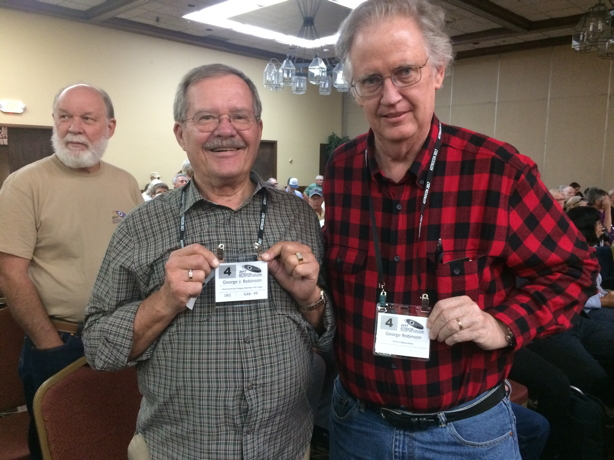 After one of the morning Astrocon sessions, we were "herded" outside, all 940 of us, for a group photo.  The photographer had to cajole us to crowd together and described our group as like herding cats.  Anyway, we each had a numbered card to hold up and we put our name and email on the back side, so anyone looking at the group photo can look us up.  Hmmm, I hope that turns out ok.  I guess "Santa Claus", who I had a chance to talk to about the Astroleague observing program, will get some special email requests? 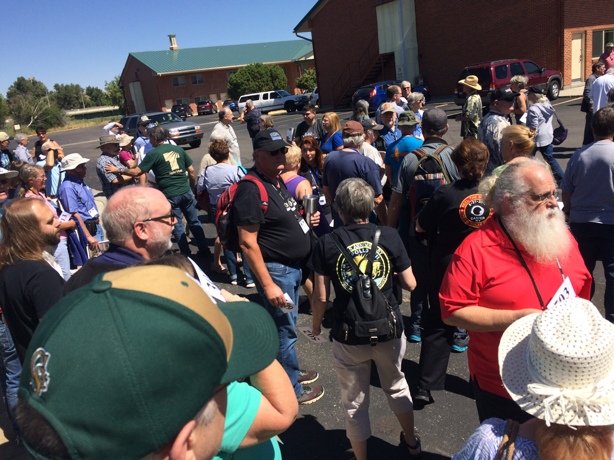 The Astrocon keynote speaker was Mr. Eclipse himself, Fred Espenak.  He was so informative and so dynamic in his presentation. I have one of his books and picked up an autographed copy of his latest book, Totality.  This book is filled with lists of interesting historical notes about eclipses and some really good pointers on photographing and observing eclipses.  He has been to 27 eclipses, if I remember the number correctly, of which most were total eclipses with the remainder being partial or annular eclipses.  Remember that an annular eclipse is one where the moon's apparent diameter is just slightly less than that of the sun and yet it's position is such that only a tiny circular ring of light is visible during maximum alignment.  During a total eclipse, such as this one on Monday, August 21, the apparent diameter of the moon is large enough to completely cover the sun.  A partial eclipse is one where the occluded sun just forms a crescent but no smaller. 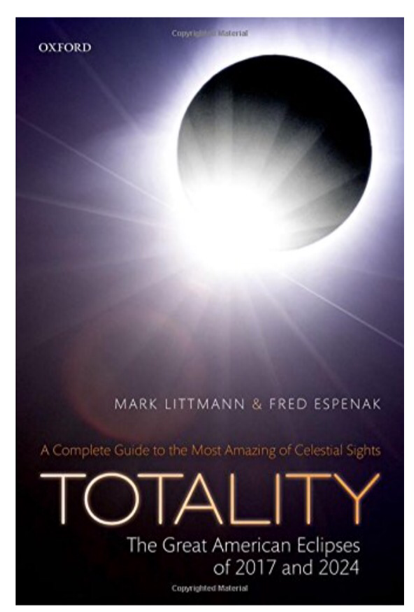 One takeaway from his presentation was that we should observe the shadows on the ground during the eclipse and notice how one edge of the shadow can be pretty sharp and well defined but the other edge can be sort of fuzzy and undefined.  He also went over an example photo session talking about when to take off the solar filter and how to photograph Baileys beads and the corona.  Neat!  We will have to look for those effects.  I tnnatively plan to use three different exposuresettinfs during totality: 1/30 for near corona, 1/2 for far corona, and 5-8 seconds for background stars and facing side of the moon.

While there were many interesting speakers, I want to comment about two other speakers who addressed the human side and the emotional side of experiencing the eclipse.  First off, Dr. Kate Russo, a clinical psychologist, spoke about how often people are quite emotionally affected when they experience a total eclipse.  She said that many people report that as the eclipse started, they were able to calmly report in logical terms what was happening, but that after the totality, these same people became quite tongue tied and really could not express how they felt.  They described the experience as "ineffable." So we will have to wait and see what two Resident Astronomers experience during their first total eclipse.

Secondly, Dr. Stephenie Slater, talked about how eclipses were portrayed in science fiction novels and movies.  This was pretty interesting and she found rhat eclipses were not very often reported in true actual scientific ways in the novels, but were just part of the plot of the novel.  Of course, she told us that science fiction is not really about science, but is about people and how people behave when they are in different situations, often based on space travel, alien cultures, etc.  this was pretty neat and she listed a number of novels and movies that we will have to put on our reading and viewing lists.  If I can find my notes, I'll pass on some of these novels.

Also for all you time travelers check out this message found on the Astrocon message board: 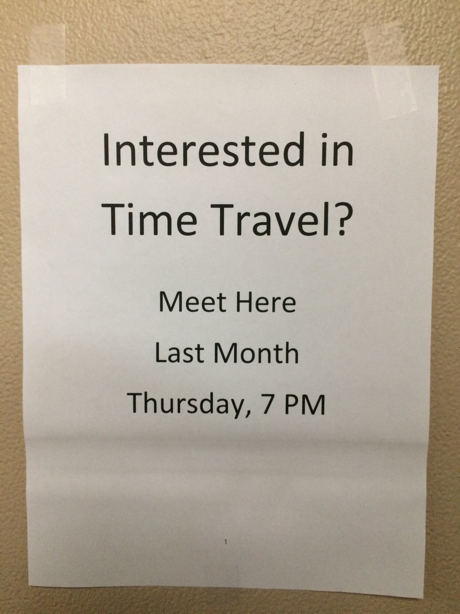 Ok, ok, let's actually go back in time abit and check out what Georges Melies had to say about the eclipse and the romance of the sun and the moon in 1907.  You probably have seen this before, but it still seems pretty funny to me:
https://m.youtube.com/watch?v=x1eGl7HHuek