Hooray, Part 1 of photos of our first total eclipse observed in Casper Wyoming!

Well this has been a marvelous day in Casper, WY, where we experienced our first total eclipse.  The sky was mostly sunny with a few thin clouds moving in after totality.  We got some good images with the 300mm telephoto which will be shown after we return to the Observatory where we have a PC and Photoshop, so for now, all I can show is a few IPhone images.

There were hundreds of scopes set up on the grass and parking lots at Casper College.  We got there at about nine 'o'clock in the morning and found a parking spot right next to the grass.  We set up our observing tent and chairs and of course the camera mounted tripod.  Resident Astronomer Peggy relaxes beside our shade tent.  I had forgot to pack the camera sunshade so had to make a duplicate out of of spare cardboard.  There is a lesson in this.  I took the original sunshade off to pack the camera and somehow just left it behind, so check and recheck your packaging to ensure all of your needed astronomical tools arrive.  See below. 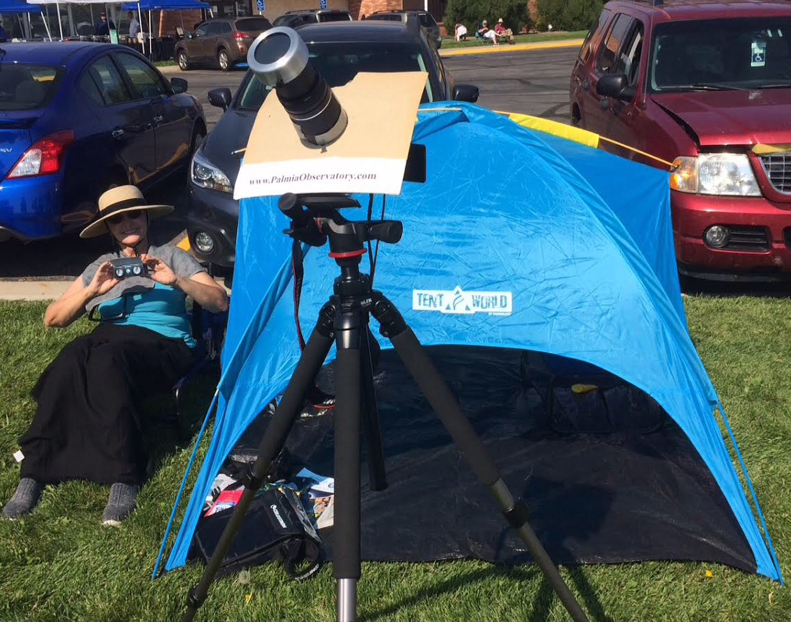 Some other astronomers next to us had purchased a colander, based on Mr. Eclipse's recommendation, and were able to see the crescent sun projected through the holes on our tent top.  This phot is not the clearest focus, but you can see the general crescent shape of the sun's projection.  Thanks for that! 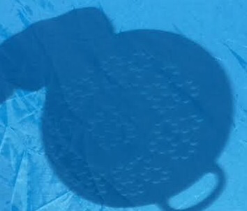 After hearing another of Mr. Eclipse's recommendations about noting how the sky darkens, I chose to take this one landscape photo before the eclipse began.  This photo includes a bright refinery flare in the distance just to the left of the second tree from the right.  The flare was observable in daylight, but not easily seen in the photo, and I wanted to see what it would look like in totality. 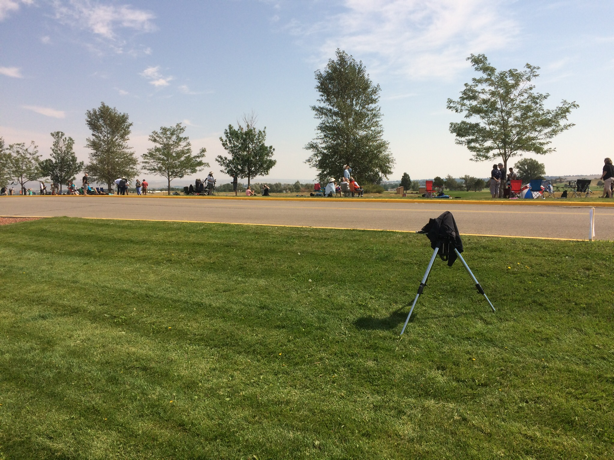 Ok, here is the same landscape scene taken during totality.  Wow, you can see that on the ground it is quite dark, but the sky is still quite visible.  Pretty neat!   The sunset view was visible all 360 degrees around us.  We did not see the shadow of the moon whizzing past us, but the decrease in ambient temperature was clearly experienced.  We did not notice any change in bird or animal behavior, other than the other astronomers oo-ing and ah-ing as totality came and went.  The refinery flare was now seen as very bright and it is now clearly visible in the photo. 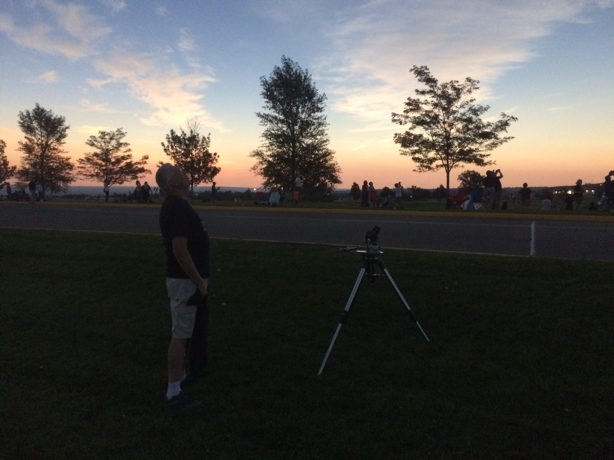 Finally, we close with a photo of this Resident Astronomer and Physicist Wannabe with another Physicist Wannabe, Searching for Gravity Waves, Dr. Gary.  We first met at an APS meeting in Baltimore, a couple of years back, and after discovering how our journey as physicist wannabes overlapped and was so similar we have been getting together at physics and astronomy conferences ever since.  Thanks for everything Gary!  Hope to see you next at the LIGO astronomy meeting in Baton Rouge.  It was nice also to meet his daughter, Emily, and her friend, Ryan. 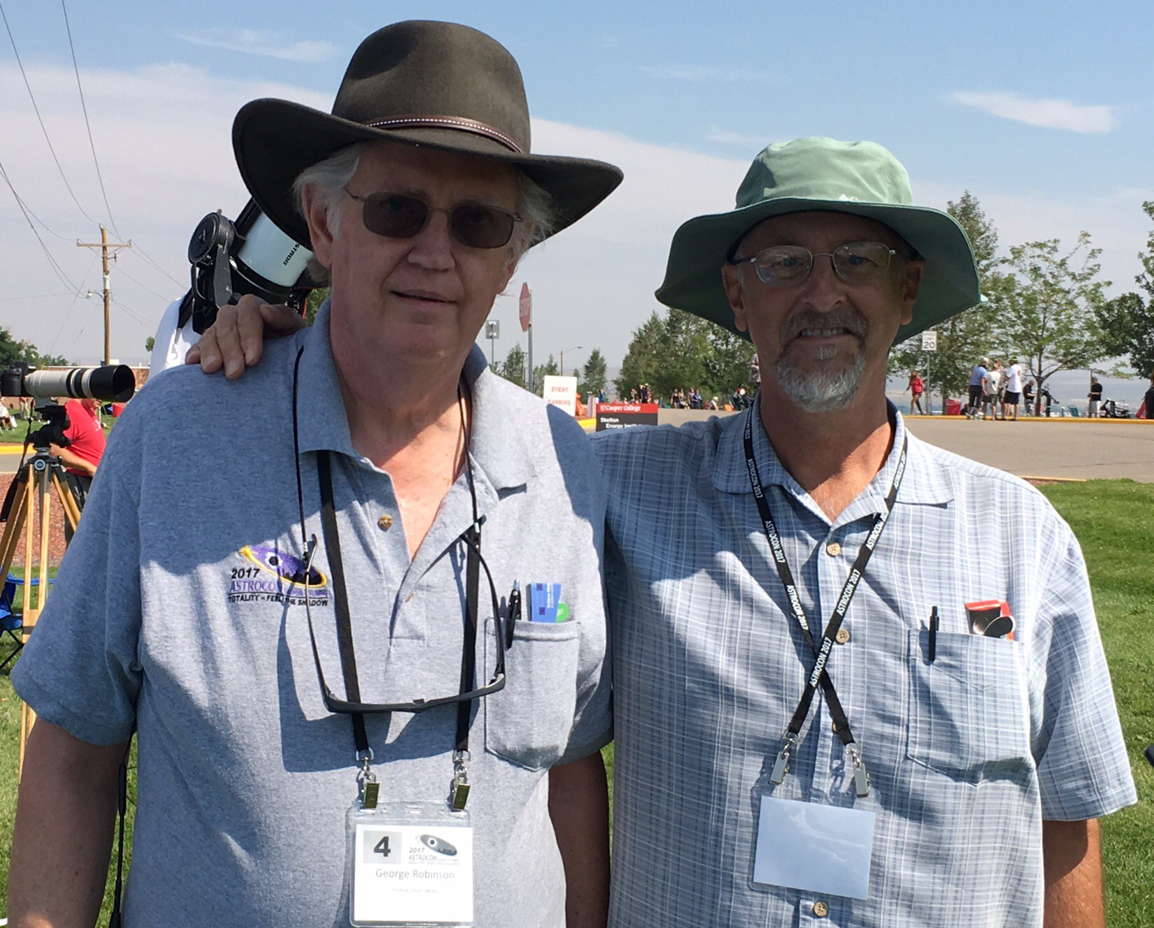 Speaking of Gary's, I also had hoped to meet up with one of my oldest friends from high school Gary,
who lives in Wyoming, but unfortunately we could not connect on this trip.  We had such fun in high school and college. Darn!

So that is just a sample of the IPhone images collected on August 21 at our Astrocon viewing location at Casper College.  The college provided a great location and they were great hosts with parking and security and vendors selling food and water.  Next time we will be able to present some of the images of the sun from first contact, through totality, to almost fourth contact.  Stay tuned.