Packing for Wyoming for the eclipse; Exploring cataclysmic variables with edX.org astrophysics course; IBM gets to 16 qbits; Astronaut Peggy's looking out the window

Well we have been busy packing our bags for Wyoming, so not much more astronomical observing will be done this week.  I have had a chance to watch a few more of the Astrophysics: The Violent Universe free internet course at www.edX.org and thought everyone might be interested in a bit of discussion of cataclysmic variable stars.


I'm busy trying to pack and do some few last minute things but wanted to introduce a bit of the course: Astrophysics: The Violent Universe.  Check out the screenshot below which shows the course instructors from Australian National University introduce this topic by showing two spectra observed for the same star and two different times.  The vertical axis is visible magnitude and the top red curve is about 6 magnitude brighter than the blue curve below.  The star spends most of its time in the quiescent mode represented by the blue curve and then periodically goes through a cataclysmic stage and grows in brightness as seen as the red curve.

These types of stars are seen quite often and when they were first discovered they initially were thought to be a nova of some sort, but then the star would go through this cataclysmic cycle again and repeat.  The next couple of lectures in this course will go more into the details of the light curve analysis and spectroscopic analysis and eventually show how to create models to explain all the details.


﻿﻿
For those of you interested in spectroscopy notice how the blue curve has peaks of increasing intensity and are caused by emission processes the red curve has dips in intensity at the same wavelengths and these are caused by absorption.  So, something strange is going on in the atmosphere of this star to be able to show such wide ranges in emission and absorption.


One type of star that can display this type of cataclysmic behavior going from dim to bright and back again is associated with binary systems made up of a red giant start and a white dwarf.  The screenshot below shows this binary pair where the two are closer than the Roche limit, which means that the gravitational forces between the two stars allows for hot gas from the red giant to escape and form an accretion disk around the white dwarf.  As these two stars continue to orbit about their common center of gravity, different regions of the accretion disk come between us and the star and the hot spot on the disk is sometimes hidden from our view and sometimes it directly in our line of sight.

This next screenshot shows an example of how some stars with very high magnetic fields can direct the inflowing material from the red giant along very constricted paths and cause very energetic hot spots that can be seen in observatons.  The majority of stars are not this highly magnetic, with fields say a million times that of Earth's magnetic field,  These regions have magnetic fields many times higher than anything possible to build on Earth. 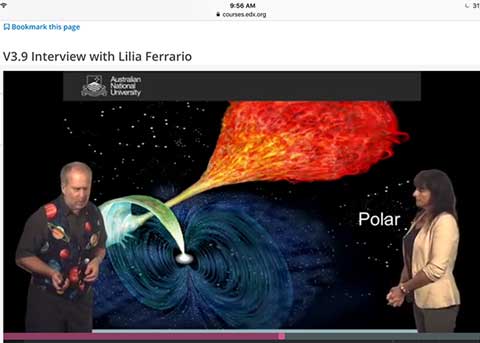 I'm excited to see some of this course and if you haven't signed up yet now is your time.

In the mail this week, we received this note from Telescope packed up in the Garage, Frank, who has reported before on status updates on quantum computing and he forwarded this news article.  IBM has   IBM is up to 16 qbits and this demonstration project lays the groundwork to get to 50 or more  qbits.If you are interested check out the details at the URL below.  Thanks for that Frank!


Now if you have a bit of physicist wannabe inside, then you might want to check out this textbook on quantum computing.  I find it pretty interesting but quite difficult still for me.  Every time I get a book that has a subtitle like "A Gentle Introduction" or "Student Friendly" I find that book is still quite difficult.  I wonder what students they have in mind when they say such things as that?  Anyway this book is to me one of the easier books to get started in understanding quantum computing.  I am just up to the point where after the authors have spent the first part of the book going over the fundamentals of quantum mechanics and explaining how to write the equations describing "qbits" and other gates, which are the quantum mechanics versions of ordinary computer bits and logic circuits.  It is very technical in terms of how quantum logic and algorithms are implemented.  Hardly any discussion about the technology used to actually build a quantum computer.  It is pretty neat though to learn how to write down the equations describing an entangled state and then doing a measurement and even though entanglement is weird, you can calculate the answer.  Be advised you are going to have to do some tensor products and equivalent type calculations.


Ok, ok, if you aren't into quantum mechanics and quantum computing maybe all of us can dream about what it must be like to be in orbit and be able to look down and see the Earth?  You probably have seen photos like this before and yet, each time I see something like this, I can't help but to sort of day dream a little.   This picture of Astronaut Peggy looking out the window of the ISS is really amazing.  How could you get any work done?  .

I can't really imagine what that kind of experience is like, but shall we just keep that image as a dream.  Ok, let's dream away until next time and happy eclipse viewing,